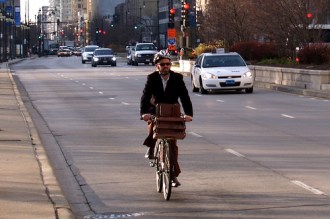 This is excerpted from a longer story in GRID Chicago. To read the original, which includes a (somewhat hair-raising) ride to work with the commissioner, click here.

When forward-thinking Chicago Department of Transportation (CDOT) Commissioner Gabe Klein reported for work on May 16 as part of Mayor Rahm Emanuel’s new administration, it marked a sea change in the city’s priorities.

After Emanuel won the election, his choice of Klein made it clear the mayor-elect was serious about sustainable transportation. The new commissioner was fresh from a stint as transportation director for Washington, D.C., where in a mere 23 months, he made numerous pedestrian safety improvements, launched a new streetcar system, expanded the downtown circulator bus system, piloted protected bike lanes, and created the nation’s first and largest bike share system.

He arrived a month before starting work, so within six months on the job, the commissioner racked up an impressive list of accomplishments and firsts, installing the city’s first protected bicycle lane, starting work on new protected lanes on two other streets, and laying plans to install a total of 100 miles of protected lanes within Emanuel’s first term. Under Klein, CDOT has begun striping conventional bike lanes continuously through intersections, it has broken the Richard Daley-era taboo against lanes in the city’s central Loop, and it has installed Chicago’s first on-street bike parking corral. The city recently issued a request for proposals for an operator to launch a 3,000-vehicle bike sharing system in summer 2012, and approved a contract to design the long-stalled Bloomingdale Trail, an elevated rails-to-trails.

And it’s not just cyclists who are feeling the love. CDOT is currently working with the Chicago Transit Authority to launch bus rapid transit corridors. The transportation department is also drafting the Chicago Pedestrian Plan. And while in 2005 Daley had the pedestrian crossing between Buckingham Fountain and the lakefront fenced off to speed car traffic, last month Klein re-opened the crosswalk, a powerful symbol of the city’s new attitude.

At only 40 years old, Klein’s personal style is very different than that of a typical Chicago bureaucrat. He’s the first CDOT commissioner to make full use of social media to promote his agenda, tweeting frequently about the latest transportation news. His Twitter profile lists pop culture, pizza, hip hop, and international beaches among his passions, and he gained a reputation here as a clotheshorse when he showed up for the July opening of the Kinzie protected lane, nattily dressed in a white linen suit.

Klein is also far more accessible than most of his predecessors. He is already a familiar face at rallies, ribbon cuttings, and galas, and it’s easy for the public to contact him via Twitter and Facebook. At Chicago’s first downtown ciclovia in October, he even volunteered for the dunking booth.

I recently interviewed Klein in his CDOT offices. I was curious about the path he’d traveled to become a self-described “fiscal conservative who’s as liberal as they come.”

Klein was born on Valentine’s Day 1971 in Hartford, Conn., to parents that were part of the Beat Generation. His Irish-Catholic mother was a lifelong artist. His Jewish father dropped out of NYU in the 1950s and moved to Japan, where he established a successful adhesive tape import business. “Supporting himself with this company basically allowed him to follow his dream, which was to be involved in civil rights and politics,” the commissioner said.

Klein’s father campaigned for liberal candidate Adlai Stevenson in his 1960 race against John F. Kennedy for the Democratic presidential nomination. In the early ’60s, he was as a Freedom Rider who marched with Martin Luther King, Jr. and Stokely Carmichael at demonstrations in the South. Later that decade, the elder Klein opened a cafe called The Sign of the Fool in San Francisco’s Haight-Ashbury district, befriended poet Allen Ginsberg, and was housemates with Neal Cassady, the inspiration for the central figure in Jack Kerouac’s On the Road.

Klein got his start with bikes early. When he was 3, the family moved to Putnam, Conn., and his dad opened the Silver Bike Shop, where Gabe helped out as kid. And although a recent opinion piece in the Chicago Tribune by John McCarron accused Klein of waging “war on cars,” the commissioner harbors a not-so-secret love of classic automobiles, which he also traces back to his father. “He got a different car probably every six months,” Klein said. “So the infatuation with transportation runs in the family.”

In addition to bikes and cars, Gabe Klein’s youthful obsessions included computers and yoga. He bought an Apple II at age 10 with a loan from the local credit union, planting the seed for his current affinity for technology. That same year, he decided he wanted to study under his father’s guru, Swami Satchidananda, the holy man who gave the opening benediction at the Woodstock festival. When the guru opened the Yogaville Vidyalam, an interfaith school along the banks of the James River near Buckingham, Va., Klein followed him there at age 11.

While studying at the ashram he lived with various families, including that of classmate and future Dave Matthews Band bassist Stefan Lessard, until Klein’s family moved to the area to open a second bike shop. Other Yogaville contemporaries included actor Liev Schreiber and Weezer’s Rivers Cuomo, with whom Klein played Dungeons & Dragons. “There were some very creative kids there,” Klein said. “It really changed my life.”

He still practices yoga every week with his wife Stephanie, and he said the spiritual lessons he learned from Satchidananda have strongly influenced his life choices. “I’m half Jewish and half Catholic, but I grew up more Hindu,” he said.

Klein’s professional history includes a stint with Bikes USA, the nation’s largest bicycle retailer at the time, and four years as a regional vice president for Zipcar, where he helped grow the company into a billion-dollar enterprise and the largest car sharing service in the U.S. In 2006, Klein left Zipcar to launch to On the Fly, a D.C.-based boutique food service company, where he helped develop electric “smartkarts” as an alternative to gas-guzzling food trucks. Two years later, new Mayor Adrian Fenty tapped him to lead the District Department of Transportation.

After Fenty lost reelection in 2010 and the administration changed at year’s end, Klein traveled to Costa Rica, did consulting work, and pondered his next move. He’d been offered positions leading various state transportation departments, but these jobs didn’t spark his imagination. Then he got the call from Chicago.

“One of the things that appealed to me about working for Mayor Emanuel was that he really had this holistic vision for a sustainable transportation system in Chicago and he also understood the economic benefits and the health benefits,” Klein told me. “So I’m really excited to be here to carry out that vision.”

Besides John McCarron’s op-ed in the Tribune, there have only been a handful of negative newspaper articles about the commissioner’s plans, but will there be a large-scale revolt once CDOT starts taking significant amounts of real estate away from cars for protected bike lanes and bus rapid transit?

With his background in marketing, Klein thinks he can prevent a major backlash by educating his constituents about how better walking, biking, and transit facilities can make the streets safer, more efficient, and more fun for all Chicagoans, even reducing congestion for motorists.

Here the commissioner takes a page from another technophile and devotee of Eastern philosophy, Apple founder and Zen Buddhist Steve Jobs. “He was able to give people what they hadn’t even envisioned that they needed yet,” Klein has said. “And then once they had it they couldn’t live without it. I think all of us in the transportation industry could learn from that.”