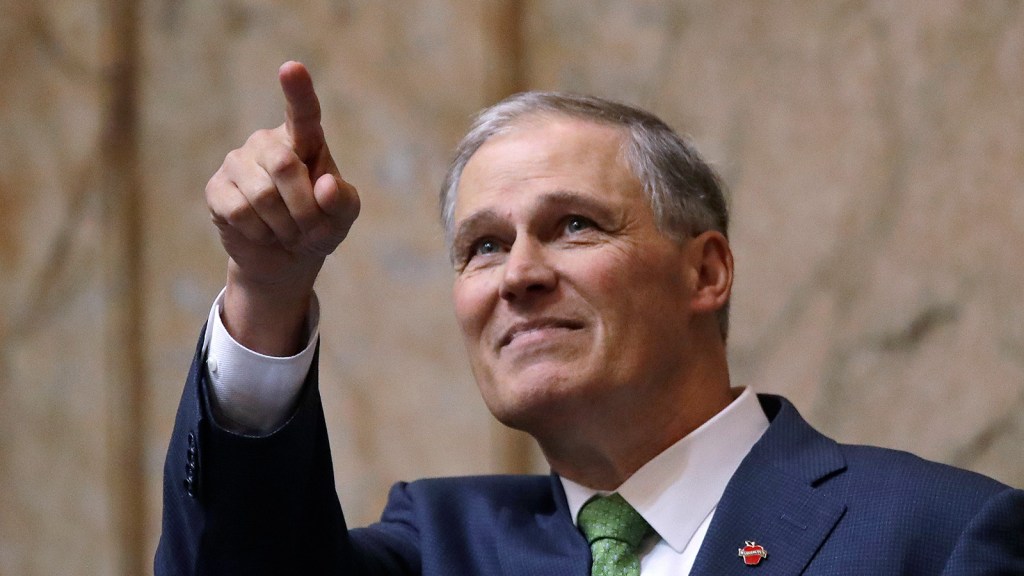 Obsession with the families Stark (both the Iron Man and Iron Throne) is fleeting, but it’s looking like there’s one durable trend unfolding before our eyes: The embrace of clean energy.

On Tuesday, Governor Jay Inslee of Washington state (and presidential contender) signed legislation that aims to make the state’s electricity carbon neutral by 2030. It’s the most recent in a series of similar moves. A couple of weeks ago, on Earth Day, Nevada’s governor signed into law a measure banning fossil-fuel generated electricity by 2050. In March, New Mexico committed to 100 percent clean electricity by 2045. California, Hawaii, Washington D.C., and Puerto Rico, passed similar laws a bit further back.

“One in five U.S. residents now live in places committed to 100-percent clean electricity,” said Mike Tidwell, director of the Chesapeake Climate Action Network, on a conference call with reporters before Inslee signed the legislation.

There are similar bills pending in Illinois, Minnesota, New York, New Jersey, Virginia, Florida, and Massachusetts. And don’t forget the 100-odd cities — Orlando, Florida and Pueblo, Colorado, among them — that have vowed to kick their fossil-fuel addiction.

It’s a seismic shift from the 1990s and 2000s, when states made goals to get get a certain share of their electricity from renewable power. Those laws were designed to help the nascent renewables industry find its footing, Freed said. Now that the industry is up and running, “the next question is, how do we get carbon off the grid?”

There’s more than one good reason to focus on building a carbon-free electric system. Though there are still hurdles to leap, states basically know how to eliminate emissions from the electrical grid, said Mike O’Boyle, head of electricity policy at the think tank Energy Innovation in San Francisco. You can’t say the same about eliminating emissions from air-travel or concrete production, at least not yet. So squeezing the greenhouse gases out of electricity is a clearly achievable goal. And there are beneficial knock-on effects: It paves the way to clean up transportation (by switching to electric vehicles) and buildings (by switching to electric heating and cooling).

“It think its a robust and meaningful trend,” O’Boyle said. “A lot of gubernatorial candidates, and presidential candidates, have campaigned on 100-percent clean electricity. It’s become part of the conventional wisdom that it’s a realistic and effective policy goal.”

Besides the bill mandating Washington state’s switch to clean electricity, Inslee signed four other bills into law that will target greenhouse gas pollution from buildings, appliances, transportation, and super-polluting hydrofluorocarbons. They arose from negotiations between unions, environmental justice groups, industry, and climate hawks, said Lauren McCloy, Inslee’s senior energy advisor. Members of these groups, from the Certified Electrical Workers of Washington, to the Audubon Society, praised the new laws.

“Signing these clean energy bills into law is a commitment to our shared values of justice and stewardship,” said LeeAnne Beres, executive director of Washington Interfaith Power & Light. “People of faith applaud the Legislature for putting Washington on a strong path toward equity and sustainability.”

For Inslee, these new laws are a key selling point as he tries to distinguish himself as the climate candidate among the 21 Democrats running for president. He recently unveiled a “100% Clean Energy for America Plan,” which would keep the United States in the Paris Agreement and ban drilling on public lands, among other proposals. But without laws demonstrating action in his own state, it would be hard to make the case that he could get his climate platform passed in Washington D.C.

*This story updates and adds to a previous story.