Earlier this week, a leaked draft of proposed treaty text from Denmark caused quite a kerfuffle.

We asked our expert panel: Is it a big deal, or a tempest in a teapot?

Andrew Light
Senior fellow at the Center for American Progress

Any veteran of the UNFCCC meetings will recognize the G77+China reaction to “the” Danish draft — there are actually several discussion documents circulating — as more of the same drama that has pervaded these meetings for the last 14 years. A not terribly creative mind could script these things before they happen. Two things jump out at me from the episode that are typical: first, the shock expressed by Lumumba Stanislaus Di-Aping, the Sudanese head of the G77, at the very idea that the Danes were drafting anything, and second, the ham-fisted insistence that developing countries, writ large, will never, ever agree to any mandatory reductions.

The first part of the drama has become par for the course by Di-Aping. Since becoming the chief negotiator to the G77 last August, he has worked tirelessly to make sure there is absolutely no progress in the UNFCCC negotiations. But ask yourself, how could Di-Aping be surprised that the Danes are working on text for an interim political agreement for this meeting when that news has been reported in every major media outlet in the world since the APEC conference in Singapore last month? The expressed shock here is incredulous.

There is a precedent, however, to today’s announcement. Di-Aping closed the Bangkok round of UNFCCC negotiations two months ago with a bold condemnation of the U.S. for having hid from developing countries a super-secret second treaty designed to replace the Kyoto Protocol when it expires in 2012. Of course, what he was talking about was the treaty language that had been under discussion for six months in the “LCA track” of the UNFCCC (the Ad-hoc Working Group on Long-term Cooperative Action), which was authorized at the Bali meeting in 2007. The “secret” treaty was the discussion draft in the LCA track, publicly available to anyone with a working internet connection, and consisting primarily of contributions by Australia, Costa Rica, and Norway, who we all know are in Obama’s back pocket, right? This is pure spin, people, worthy of our best spinmeisters in D.C.

The second part of the drama — the claim that developing countries will never agree to anything ever — is also a mainstay. No one agrees to anything in these meetings until the very bitter end. The conventional wisdom is that it’s the only way any party can actually get what they want.

Just look at the run-up to this meeting. Both China and India had major presidential-level summits with the United States in Beijing and D.C. last month. Both agreed to major bilateral agreements aimed squarely at fulfilling one of the core mandates of the Bali Action Plan; namely, assistance from a developed country with clean energy technology in exchange for eventual cuts in emissions. Both agreed to the ground work for eventually being able to measure, report, and verify their emissions reductions (MRV).

But with all that, these [developing] countries also met prior to Copenhagen, along with the leaders from Brazil and South Africa, to reiterate their position that they would never agree to any emissions cuts. Why? To reset the negotiating clock to 0 lest developed countries take it for granted that they could get even an interim agreement out of this meeting.

But someone please show me what is so terrible about the now weeks-old draft discussion text from the Danes that was released by The Guardian earlier this week? Does it expect that developing countries will eventually peak emissions? Certainly it does. But do we really want to say that some of the world’s largest emitters should never agree to peak emissions?

At bottom, we need to stop thinking of the developing world as one giant homogeneous group, which, unfortunately, the G77 would have us do, and start thinking about it as two new groups: major emitters and everyone else.

The IPCC has claimed that holding the world to a 2 degree Celsius increase over pre-industrial levels requires a global cut in emissions by half by 2050. If the developed countries cut their emissions 80 percent by 2050, which they agreed to do at the G8 and Major Economies Forum leaders meeting in Italy last July, and the six major emitters in the developing world do not cut their emissions, then we will never reach that goal.

The numbers now are no longer the terms of a political compromise, but the only way we can manage the physics and atmospheric chemistry of the situation.

I’d love to see COP15 go forward without any more needless posturing by any of the parties, but I’m not holding my breath. I applaud the Danes for what they are trying to do to pull some significant advances out of this meeting and would hope that the rest of the parties give them a chance to actually deliver on their promise.

Having read the Guardian article and skimmed the draft document, I would say that if the document really does constitute the path going forward, it’s quite a big deal. From my perspective, of course, some of this would be a great development.

As I’ve argued here before, I think it was a grave mistake to base the original Kyoto negotiations in a U.N. framework; it was an even graver mistake to move forward without requiring developed countries to adopt firm targets and peaking years; and with the U.N.’s reputation for fiscal irresponsibility, it would be absolutely insane to entrust them with handling any climate funding for distribution to developing countries.

It is not surprising that the developing countries are in a lather about this, as it forces them to do something they have so far adamantly rejected, which is to adopt fixed numerical emission reduction targets, and a date for when their emissions would peak. They have to know that the flow of wealth from the developed world would be pinned to their success [at meeting emission-reduction targets], and that verifying such success will require foreign monitoring.

Finally, the developed countries must realize that this new agreement puts them in a public relations bind. If they agree to their targets, and don’t accomplish them, the developing world is likely to relax its own emission controls as its economies grow less competitive with non-compliant developing countries.

I have my doubts that this [draft agreement] will go beyond the trial balloon stage, and if it does, it will be somewhat risky for Obama, as it is a repudiation of much of what the environmental left has always wanted, the control of the world’s energy use by the United Nations, which also gets a massive pot of money from developed countries to distribute to developing countries. And, it would leave developed economies able to emit more than developing countries, something many environmentalists consider anathema.

The Danish text shows us that we are entering a process potentially predicated upon injustice, exclusion, and dominance.

This text was written behind closed doors where the principles of climate justice, common but differentiated responsibilities, inclusion, and transparency would not be missed. It was written with the assumption that developed countries have the right to dictate the rights of the world’s poor and vulnerable. Capping Global South per-capita emissions below those of the Global North while imposing mandatory, quantified intensity targets without consultation preempts the fundamental human right to self determination, freedom, and appropriate quality of life.

Handing authority over what could be billions of dollars in climate finance to a World Bank with issues plaguing their strategy formation, voice inclusion, and transparency only adds insult to injury.

Despite the hype, the talk of “Hopenhagen,” the supposed political will to “get it done,” there is nothing special or unprecedented about Copenhagen today. It could be just another round of the North-South divide and power struggle. If you told me I had entered the wrong conference center or gotten on the wrong plane and I was at the WTO, I would believe you right now.

Whether or not this [draft agreement] was sanctioned by the UNFCCC, or an undertaking of the COP leadership, these ideas were being seriously considered by those with immense responsibility. No one is saying that developed parties bear the entire burden; emissions growth must slow in the developing world. But how we go about it, and with how much support, is an entirely different conversation than the one currently being had.

As a negotiator, you can never have something until you give it away. As somebody who has been to and watched many of these meetings over the last 12 years, this “leak” seems pretty transparent, though.

During the first week of every U,N. meeting, the developing countries react furiously over something.  No matter the debate, it is clear the parties need to get developing countries aboard. In order to do so, they will likely need to move them away from the billions in adaptation funds they seek. Already, reaction to the billions being demanded is being received with nervousness.

In the end, this is a negotiating tactic that may likely backfire in the short term because it is so transparent, only serving to annoy other parties. Long-term, it likely serves its purpose — making the developing countries feel like they have won something when the position is softened.

I return to an important question: How does this back and forth help you achieve an agreement that is acceptable, enforceable, global, and gets you to 350? I suggest it is showing us how the long and winding road is not leading us anywhere yet.  In short, it was a tempest in a teapot. But get ready, COPsters, the ride is just beginning. 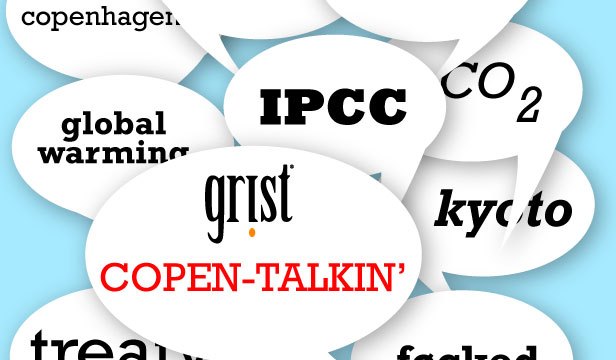 The COP15 climate conference starts next week in Copenhagen, and our panel of experts is optimistic … ish. We asked them, “What’s the mood as Copenhagen approaches?” Many say they draw inspiration from the fast-growing, increasingly diverse, grassroots global climate … 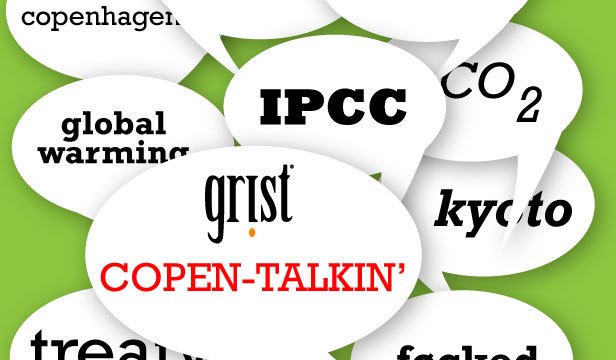 What does it mean that Obama is going to Copenhagen at the end of the climate talks? [UPDATED]

We asked our expert panel about the significance of President Obama changing the timing of his visit to the Copenhagen climate talks, from Dec. 9, the middle of the first week, to Dec. 18, the big finale at the end … 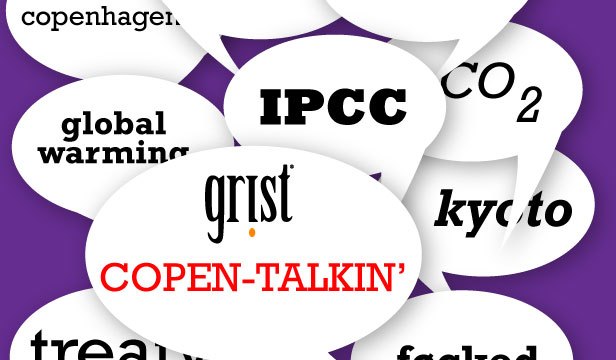 Will the EPA’s greenhouse-gas decision affect the Copenhagen climate talks? On Monday, as expected, the U.S. EPA officially declared that greenhouse gases are a threat to public health (the so-called endangerment finding), which means the agency is now “now authorized …
See all articles in this series