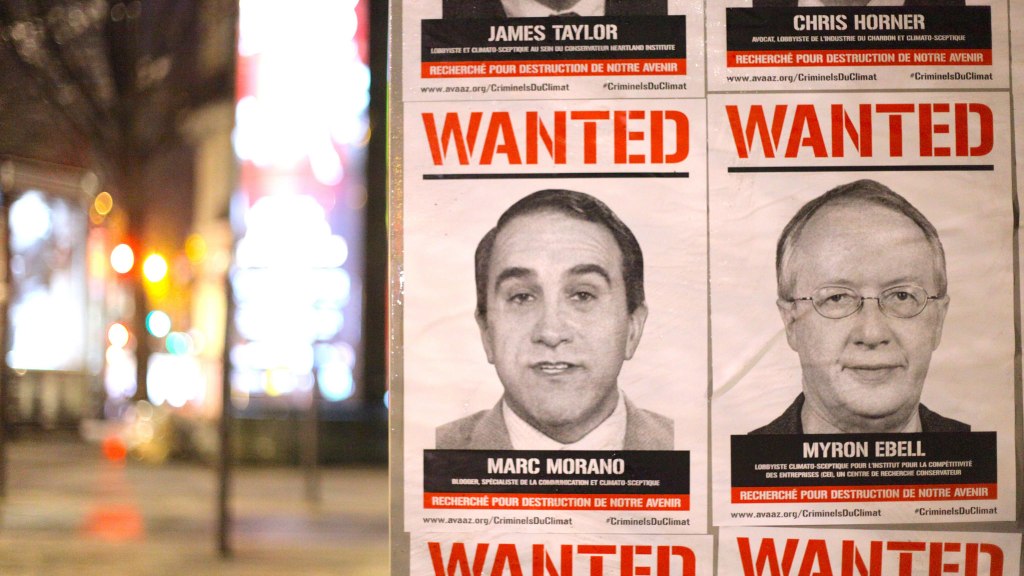 Benjamin Sporton, Myron Ebell, Marc Morano, Chris Horner, Bjorn Lomborg, Fiona Wild, James Taylor. These names may be unfamiliar to you, but they are climate criminals, men (and woman) in the pocket of big business whose lives are dedicated to spreading misinformation on climate change. And right now, they are in Paris, attempting to sabotage the climate talks by lobbying on behalf of industry. These people are bad for the planet, no doubt about it, and Avaaz, a worldwide organization of online activists, wants you to know their names.

The group has plastered Paris with thousands of “wanted” posters featuring the seven climate criminals. Avaaz has also built a website featuring the photos and dossiers of these villains. Here’s the entry for conservative puppet James Taylor, who is nothing like the James Taylor your mom listens to:

James Taylor is a Senior Fellow with the Heartland Institute, a climate denial lobby group based in Chicago, USA. He argues that climate change has stopped, claiming “absolutely no warming during the past 10 years,” and has said the world should abandon efforts to fight what he calls a “mythical global warming crisis”.

In a fundraising email ahead of the Paris climate talks, Taylor appealed to potential donors to help raise $60,000USD for a Heartland trip to Paris, to hold a “counter-conference” that will “expose the agendas and true costs of the agreement being negotiated”.

Heartland stunts include travelling to the Vatican to “inform Pope Francis of the truth about climate science,” and a billboard associating belief in climate change with the US ‘Unabomber’ terrorist and serial murderer Ted Kaczynski, which badly backfired when prominent supporters of the organisation withdrew their funding.

“These lobbyists have come to Paris to sabotage a global deal for ambitious climate action, despite over 3.6 million citizens around the world calling for 100% clean energy,” Avaaz Executive Director Emma Ruby-Sachs wrote in a press release. “Ministers must listen to their people, not polluters, and refuse meetings with climate criminals who want to derail a deal the whole world wants.”