The images have started to enter the public consciousness: the Pacific islander whose homeland is sinking beneath the waves, the Sahel villagers forced off their ancestral land by creeping drought and desertification. But even as climate change forces people from their homes, no clear legal consensus has appeared as to how the international community should deal with the problem.

The existing refugee convention doesn’t work. It specifically defines refugees as fleeing state persecution, not macro-level anthropogenic climate effects. It’s also very hard to determine who should count as a climate refugee, given all the intermingling factors that ultimately force someone to leave. That’s why the negotiators hashing out the world’s most important climate deal in Paris right now aren’t even considering language to grant rights to climate refugees.

Instead, advocates for environmentally displaced people are hoping the treaty will list migration and displacement as a priority for the future, but even that aim is up in the air due to a broader dispute playing out between developed nations and developing ones.

What’s in a name?

Take a family living in a small fishing community along the eastern bank of Bhola Island in Southern Bangladesh. If a cyclone sends a storm surge that erodes the land this family is living on, they’ll have to move somewhere. Even a slight nudge from climate change can tip the delicate balance, says Kathinka Evertsen, who researched migration from this region for her master’s thesis at Sciences Po in Paris.

“These people are so on the edge of everything that, even if there are very small changes in the weather they are dependent on, that really destroys their livelihood,” she says.

But here’s where it starts to get tricky. While scientists agree that climate change is raising sea levels in the Bay of Bengal and contributing to stronger and more destructive cyclones, a multitude of other physical causes are at work there, too. Cyclones have battered the Bay of Bengal for years, and erosion from the sheer force of the delta’s rivers is a fact of life. Economics also come into play: If the family can purchase land inland, they won’t have to flee their homeland. Or if they can find a new job after the loss of farmland, they might be able to stay. In any case, there’s no scientifically sound method for examining all these factors and determining that climate change was most responsible for the need to leave. 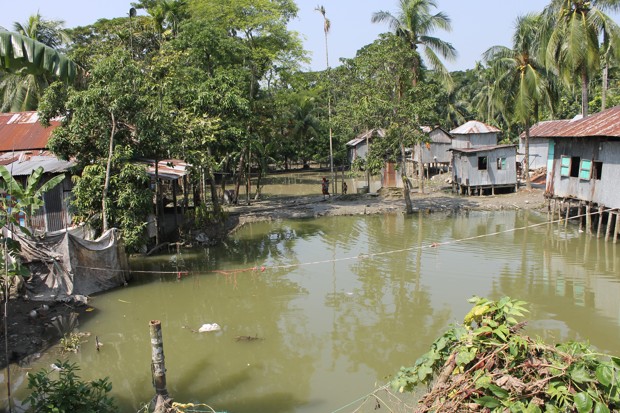 Cyclical flooding regularly inundates the delta region of Bangladesh, which may make it hard to determine if climate change causes a particular flood in the future.CityLab / Casey Williams

Then there’s the legal problem. The guiding document of international refugee law, the 1951 U.N. Convention on the status of refugees, defines them as people who have left their home country and can’t return because of a “well-founded fear of being persecuted for reasons of race, religion, nationality, membership of a particular social group, or political opinion.” Rising sea levels, droughts, and severe superstorms don’t fit into that definition.

There’s also the requirement of government persecution, but in most cases it’s not the government that’s persecuting people, it’s the climate. A court case in New Zealand tried to extend these protections to a family from the small island nation of Kiribati, arguing the danger from climate change back home amounted to persecution. The courts repeatedly rejected that argument, though, and the family was deported in September.

The gap in the international framework might not cause chaos now, while the effects of climate change are still ramping up. But climate-induced migration is only going to increase in the years to come. The International Organization for Migration says the most common estimate is 200 million environmental migrants by 2050.

A declaration of rights for climate refugees is not on the table at the COP21 in Paris. That’s not a huge problem for Walter Kaelin, the envoy of the chairmanship of the Nansen Initiative. The Geneva-based group is trying to rally international action to protect climate-induced migrants, but Kaelin points out that climate negotiators aren’t really specialists in refugee issues; their job is to rein in the carbon emissions that will do the displacing in years to come.

What Kaelin hopes to see in the eventual treaty is language naming displacement and migration as a priority deserving of international attention. “If it’s mentioned in a general way then you can build on it,” he says. “This has not been achieved yet.”

Seems reasonable enough. But the question of where to include a mention of migration has landed squarely in the middle of a major political battle between the haves and the have-nots. That is, delegates from the global south want to see climate displacement fall under a framework of “loss and damage”: They believe that developed nations, which emitted most of the carbon, need to compensate the countries damaged by climate change, including the people forced to leave their homes as a result (see Article 5 of the draft agreement). 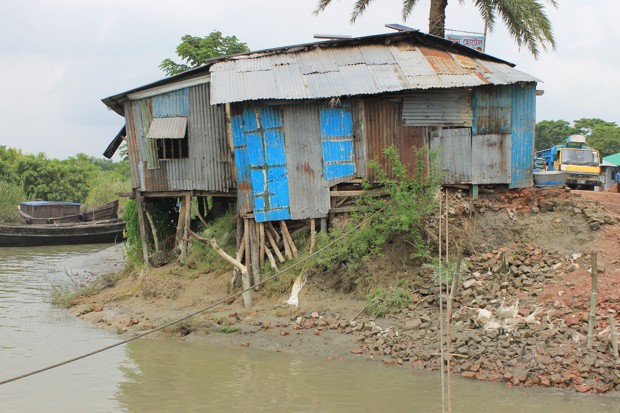 The role of climate migration in the COP21 agreement is precarious, much like this structure perched on the receding shoreline of Bhola.CityLab / Casey Williams

The global north, on the other hand, wants a framework of adaptation. What’s done is done, so let’s focus on making the most of the world we live in. Under that philosophy, richer nations would help subsidize the costs of poorer nations adapting to the challenges of climate change, but wouldn’t be compensating them for the losses. They also wouldn’t be taking responsibility for contributing the brunt of the carbon to the atmosphere.

“It has not so much to do with migration — it has more to do with much bigger issues of climate justice,” Kaelin says.

There might be something to the idea of focusing on adaptation. Evertsen says that in the environmental migration she studied in Bhola, speed was of the essence. It takes money to travel and set up a new home; if you wait until the flood or storm destroys your home, it’s a lot harder to move. In that sense, an adaptation approach that provides funding to relocate before a disaster could prove more helpful than a legal refugee status to apply for after you lose everything.

The fate of people displaced by climate change won’t be decided in Paris. In all likelihood, a binding agreement to reduce greenhouse gas emissions will do more good for the potential refugees of the future than hashing out an addition to the 1951 Convention. But assuming people will be displaced, regardless of the outcome, the community of nations will have to figure out some mechanism to handle cross-border migration. The West’s recent response to the more immediate and visible war in Syria has shown the dangers of waiting for a crisis to crescendo before figuring out how to respond.