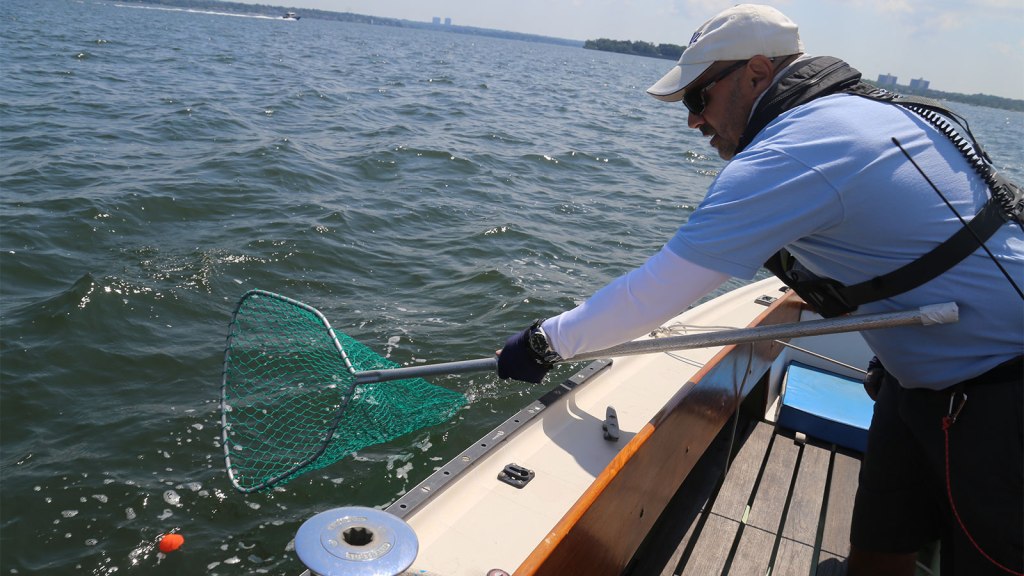 The Bronx’s City Island docks are a strange mixture of outer-borough New York and New England coast. There are crusty boatyards and pristine yacht clubs, seedy seafood joints and fancy oyster bars, “my she was yar” schooners and “I’m on a boat” party cruisers. But the love of the ocean has always had the ability to bring disparate-seeming forces together — including, in this case, climate activism and the American Sailing Association.

On a recent summer morning, I headed to the docks to watch Captain Dave Jenkins of Soul Sailing prepare a small sailboat. Life vests and nautical maps in hand, Jenkins — a charismatic middle-aged man decked out in an appropriate sailing ensemble (boat shoes included) — boarded a vessel which was moored at the Harlem Yacht Club. We had been going back and forth for months trying to find the right time to head out on the water, only to be forced to reschedule several times due to unfavorable weather conditions. First it was the cold, then the heat, then torrential rain — the kinds of extremes that climate scientists say we should expect more of in the near future.

But on that day, with the sun shining bright and a slight breeze in the air, Jenkins assured me conditions were “ideal for sailing.”

“This is my playground,” Jenkins said of the open water. But it’s not just his alone — the way he sees it, the water belongs to everyone. He takes his sailboat, the Betty Lou, out regularly, showing students how to explore the five boroughs by way of its many waterways. While many people think of sailing as an exclusive endeavor, Jenkins says there are ways to keep the sport accessible. For example, there are a lot of old sailboats out there that sell for cheap and don’t require expensive fuel compared to one of those pesky motorboats.

“There’s so much to do in the city, they forget about the sixth borough — the water,” Jenkins said.

Jenkins’ love of the water is infectious. But in order for future generations to continue to enjoy it, he knows seafarers like himself need to do more than attract new talent. They also need to keep the ocean as clean as possible. And so every time he takes the sailboat out to open water, whether he’s hanging out with friends or instructing students, he keeps an eye open for any plastic debris.

Jenkins says cleaning up trash while you are out on the water is something many sailors have been doing for a long time. But thanks to a new ocean cleanup program by the American Sailing Association, one of the world’s biggest coalitions of sailing enthusiasts, trainers, and charter companies, the habit is becoming formalized.

The group started the crusade, called Operation Plastic Pollution Purge, last year. The campaign, which, according to the American Sailing Association’s website, has exposed around 111 million people to the concept of ocean conservation, urges boaters to reduce or eliminate the number of plastic items they bring on their vessels and to collect and properly dispose of any trash they see while they’re out on open water. It’s an especially important value to instill in new sailing enthusiasts, and something organization says it is uniquely situated to do given its 300 schools and 7,000 instructors.

“It has to start with one person, and what better group of people than sailors,” Lenny Shabes, CEO and founder of the American Sailing Association, told Grist.

Granted, not all types of boats are great for the environment. Big cruise ships, for example, run off of diesel fuel and can actually end up being more harmful to the planet per mile even compared to air travel. But sailboats are largely wind-powered, and when decked out with solar panels like the one currently transporting 16-year-old Swedish climate activist Greta Thunberg to the U.N. Climate Summit in New York City, can provide a net-zero means of transportation even across long distances.

More than that, Shabes says sailing can benefit the planet because it can make people realize they have a special responsibility to the water. “It’s a very spiritual thing. There’s no propulsion involved, other than what the good earth gives you. The difference between living in New York City and going sailing in the Long Island Sound, which is one of the most beautiful places in the world to sail is immense. To see it become polluted because some yahoo doesn’t care and throws the plastic bottle overboard — it irks me.”

And between the planet’s warming waters and humanities’ growing trash problem, the oceans need all the love they can get. Scientists don’t know exactly how much plastic trash is in the ocean, but some estimates suggest that as much as 244,000 metric tons might bob on the surface. Another 8.5 million metric tons are though to settle on the ocean floor per year. The United Nations estimates that by the year 2050 there will be more plastic debris in our oceans than fish.

“It’s as if you took a New York City garbage truck and dumped it full of plastic into the ocean every minute of every day,” Jenkins said.

If that trash stays at sea, it could cluster up in trash hot spots, the most famous of which is a swirling mass of garbage twice the size of Texas. The patch is located somewhere between California and Hawaii called the Great Pacific Garbage Patch. There, currents deposit waste like abandoned fishing gear, bottles, and tiny pieces of pulverized plastics.

Back at the City Island docks, Jenkins and I were just about ready to set sail on our trash-finding venture. As the Betty Lou pulled out from the Bronx and into the open water, it felt like an escape from city life. To the east lay the Sound, Connecticut to the north and Long Island to the south. We headed toward the Long Island Sound.

Jenkins surveyed a nautical chart as we headed south and the ship neared the Throgs Neck Bridge. It wasn’t long before we spotted our first piece of refuse — a bright yellow bag floating on the waves. Jenkins quickly redirected the Betty Lou, grabbing a handy net. As we cruised by, he dipped it into the water and lifted it up to reveal a soggy bag of Funyons. After about three hours of sailing, we’d amassed a modest bag’s worth of trash. Jenkins said that if we’d gone sailing on a Monday after people were in surrounding beaches over the weekend, he would have expected even more prices of plastic surrounding the ship.

Of course, it will take more than a few sailing trips to solve the ocean’s plastic problem. That’s why many countries are either restricting or even wholesale banning single-use plastics. But Bonnie Monteleone, executive director of the Plastic Ocean Project, says these small-scale clean-ups can still do a lot of good. As part of a separate cleanup effort, she hired charter fishermen to pick up trash they see offshore. “Just that exposure of getting people to become aware of how much trash is out there — I call it “the magic eye,” Monteleone told Grist. “Once you do you can’t unsee it. I think any opportunity that will get people out on the water [for this kind of effort] will cast a wider net and get more people proactive at picking up what they see. “

And the stakes are high: The billions upon billions of items of plastic waste choking our oceans, lakes, and rivers and piling up on land is more than unsightly and harmful to plants and wildlife. According to Lauren Coiro, the American Sailing Association’s marine conservationist, plastic Pollution is a very real and growing threat to human health. “In terms of the health of marine life, it’s not good,” Coiro told Grist. “In terms of our own health, it’s not good.”

Indeed, the toxic chemicals leach out of plastic and can be found in the blood and tissue of nearly every one of us. Exposure to these substances is linked to cancers, birth defects, impaired immunity, endocrine disruption and a whole slew of other ailments. What’s worse, instead of breaking down, plastic breaks into smaller and smaller pieces called microplastics, making it even harder to clean up.

But on a macro level, ocean cleanups can still do their part to help rid the ocean of its plastic scourge. And who better to lead the way than people who are already on the waves? “Sailors are naturally a really easily motivated group of people,” Coiro says. “When we asked sailors to start talking about this and take leadership … a lot of sailors [were] happy to do it..”

At the end of our rendezvous on open water, Jenkins packed the sails away, a process that requires the utmost care to avoid twists, tears, and tangles. With the lines finally coiled and the sails covered, and Betty Lou was tucked in for the day — but perhaps not for long.

If weather conditions are favorable, Jenkins says he’ll go back out and do the same thing all over again tomorrow.