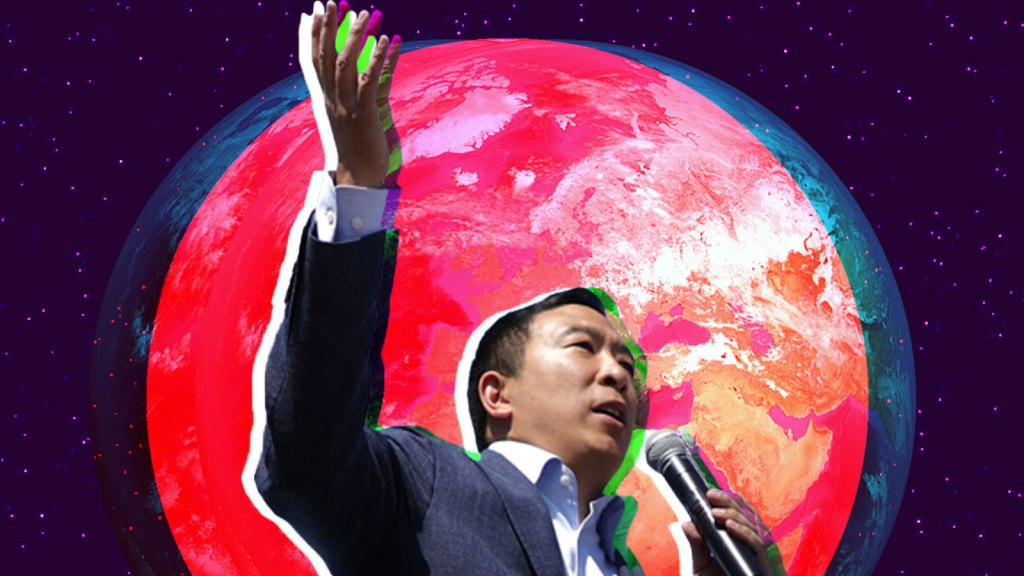 During the July debates, when CNN moderators asked Democratic presidential candidates about their plans to tackle the climate crisis, most of the responses were about what could be accomplished if we took swift action. Bernie Sanders talked up how he would ensure fossil fuel workers aren’t left behind in a lightning-quick shift to a green economy. Kirsten Gillibrand (who has since left the race) evoked JFK, comparing fighting the climate crisis with the race to put a man on the moon. Elizabeth Warren explained why the Green New Deal would boost the U.S. economy by allowing us to export green technology abroad.

And then there was tech entrepreneur Andrew Yang. “We are too late,” he said. “We are 10 years too late. We need to start moving our people to higher ground, and the best way to do that is to put economic resources into your hands so you can protect yourself and your families.”

At this comment, a lot of the internet — journalists included — basically lost its shit. “The game is not lost,” exclaimed the Atlantic’s Robinson Meyer. Earther’s Brian Kahn said Yang “has the most dangerous ideas about climate in the entire Democratic field.” New York Magazine’s Max Read interpreted Yang’s comment to mean, “The world is fucked, you’re on your own, take some money, head to higher ground.”

The controversy illuminated a contradiction at the heart of Yang’s campaign: His signature universal basic income proposal to give every American $1,000 each month suggests Yang is perfectly capable of selling a pie-in-the-sky idea. But when it comes to climate change, his optimism turns to doomsday prophecy. The title of Yang’s climate plan is “It’s Worse Than You Think – Lower Emissions, Higher Ground.” And despite what his critics assumed, Yang’s plan isn’t just to distribute a UBI and let people figure it out on their own — the plan includes $40 billion in subsidies and grants to help people relocate or elevate their homes to escape wildfires, rising seas, and floodwaters.

Though his message isn’t crafted to inspire, it is a message rooted in some degree of truth. Yang may be a bummer, but he’s the only Democratic candidate talking seriously about adaptation — something many experts say we need to do in addition to mitigating the effects of climate change to survive on a warming planet.

One of the main tenets of Yang’s climate plan is managed retreat, or moving people away from coastal areas as sea levels rise.

Talking about managed retreat has, for a long time, been somewhat taboo in environmentalist circles. The thinking is: We need to focus all our energy and brainpower on preventing the worst impacts of climate change. If we start talking about adapting to the results of warming temperatures and sea level rise, we’ll just be enabling status-quo behavior, such as allowing fossil fuel companies to continue on with their polluting. Conceding the need for adaptation, the thinking goes, means the conceding the game.

But Yang isn’t the only provocateur to publicly challenge the conventional wisdom on prevention vs. adaptation. A similar conversation played out when New York Magazine ran David Wallace-Wells’ “The Uninhabitable Earth,” a cover story describing the worst possible effects of climate change, in 2017. Wallace-Wells came in for a drubbing from scientists who accused him of exaggerating and critics who called his piece “climate disaster porn.” The same cycle played out again just this week in the aftermath of writer Jonathan Franzen’s New Yorker essay, “What If We Stopped Pretending?” which was largely condemned (including in Grist) for its largely unscientific, unfounded nihilism.

Yang’s detractors say their criticism is rooted in pragmatism. “Research suggests that worry and hope can motivate people to support climate action,” wrote Leah Stokes, a professor and researcher on climate politics at the University of California, Santa Barbara, in a Twitter thread dissecting Yang’s climate plan. “But fear does not. This is fear based messaging.” It’s true that most psychologists agree that positive messaging is more effective than negative messaging at persuading people to take climate-related action. Some research shows that emphasizing climate risks can backfire, paradoxically causing people to underestimate their personal likelihood of being affected.

Denial and despair are, of course, useful to nobody. But there’s a fine line between avoiding fear-based messaging and glossing over what our best climate models say is going to happen. Margaret Klein Salamon, a former clinical psychologist and founder and director of The Climate Mobilization, an advocacy group, told Grist that the mandate to stay positive when talking about climate change ultimately means only telling part of the truth.

“I don’t see how we could possibly achieve the scale of transformation we need if there’s not a shared understanding that this is an existential threat,” she said. “If people don’t think that, why would they change their minds? Why would they be part of a political movement?”

Yang certainly seems to understand that climate change is an existential threat that will require some drastic changes in how (and where) we live. In fact, he is the only 2020 presidential candidate who is willing to give voice to an unpleasant truth: Climate change cannot be stopped entirely, and it’s expected to accelerate rapidly in the coming years, no matter what we do. Managed retreat has already begun in many coastal areas, and adaptation strategies are a prerequisite for avoiding major losses. Figuring out how to adapt to rising sea levels and erratic weather will be necessary no matter how much the next president reduces fossil fuel emissions.

The message is sound. But for some critics, Yang is the wrong messenger. In her tweet criticizing Yang’s “fear-based messaging,” Stokes wrote: “I’m okay with journalists using this kind of tone. It’s very problematic from politicians, who are charged to help us solve this crisis.”

For better or for worse, the other candidates’ optimistic, can-do approach to climate is much more in line with what voters expect to hear from a commander in chief (our current one notwithstanding). Yang’s doom-and-gloom take on climate may be grounded in facts, but it’s distinctly unpresidential. But if we — and the ultimate Democratic nominee — dismiss Yang’s message entirely for that reason, it’s at our own peril.