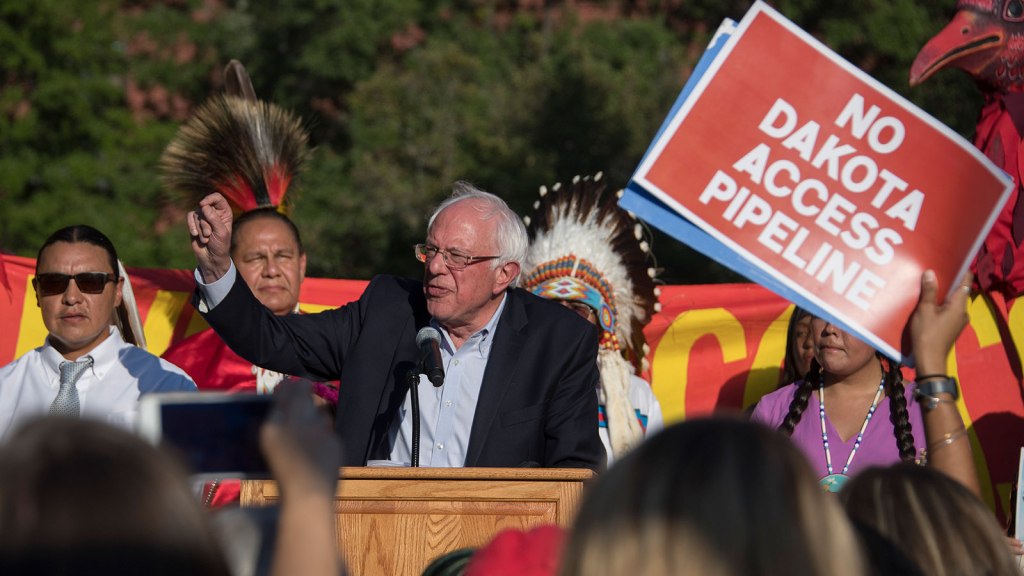 By and large, presidential candidates tend to stick to the same big, national issues, like the economy or healthcare. But next month, voters will get to hear a handful of hopefuls weigh on some less-covered topics: voter ID laws, harsh new punishments for pipeline protesters, and Standing Rock.

So far, five of the 24 official candidates vying for the Democratic nomination have confirmed they will participate in a forum devoted entirely to indigenous peoples’ concerns on August 19 and 20 in Sioux City, Iowa. The conversation will include four familiar faces for those who watched the first Democratic National Committee debate: Vermont Senator and 2016 almost-nominee Bernie Sanders, author and meme fodder Marianne Williamson, Obama-era Housing and Urban Development Secretary Julián “Do Your Homework” Castro, and former Maryland Congressman John Delaney. They will also be joined by Montana Governor Steve Bullock, a Democratic candidate who did not meet the qualifications for the first Democratic National Committee debate, and Independent candidate Mark Charles, a member of the Navajo Nation.

“I think if the presidential candidates are smart, they’re going to realize the actual voting power Native Americans have,” O.J. Semans, co-director of the Native American voting rights group Four Directions, which is hosting the event, told the Sioux City Journal.

Some 3 million to 5 million Native Americans live in the U.S., according to the National Congress of American Indians. And, as Semans points out, that’s an important voting block: “Right now, we have large populations in seven states that are battleground states.” Native American political influence has had a substantial impact on elections in some states. In North Dakota in 2012, for example, tribal voter turnout efforts were credited with the election of Democratic Senator Heidi Heitkamp, who won by a slim 3,000 vote margin.

Over the two-day event, candidates will take questions from panels of elected tribal officials, tribal members, and Native American youth. The forum will likely discuss a plethora of issues, among them sovereign rights of tribes, housing, and the protection of Native land.

In the past, D.C. lawmakers have been less than sympathetic to native-raised issues In 2016, for instance, the Standing Rock Sioux Tribe pushed back on the Dakota Access Pipeline, a more than 1,000-mile-long crude oil pipeline slated for construction near its reservation (and on its traditional sacred lands). The protests gained international attention after police state troops escalated efforts to remove unarmed demonstrators, using water cannons and roadblocks. Despite native objections, President Trump ordered the Army Corps of Engineers to proceed with the project, which was completed in the spring of 2017. (After Standing Rock, several states passed harsh anti-protester laws under which interfering with pipeline infrastructure could result in up to a decade in prison and $100,000 in fines.)

Another topic that’s likely to come up: voter suppression and disenfranchisement. In states like North Dakota and Wisconsin, Native Americans are dissuaded from going to the polls by voter ID laws that require identification with proof of address that it is difficult for many to obtain: many Native American nations are located in rural areas without formal addresses. What’s more, polling places are often situated far from those nations. Thankfully, in last year’s midterm elections, Native American rights advocates went to bat against the issue and championed unprecedented voter turnout.

Several other White House contenders are allegedly considering signing on to the forum. Representatives from the campaign of Senator Elizabeth Warren, who caught flack from Trump earlier this year for touting her so-called Native American ancestry, told ThinkProgress she is “exploring whether it will be possible for her to attend the forum.”