In December of 2016, a flatbed truck carrying 450 solar panels — enough to cover the roofs of an entire city block — pulled into the waste-transfer station in Berkeley, California. New, each panel would sell for hundreds of dollars. Used, well … you’d have to pay to get rid of them. Though they’re green superstars, displacing fossil fuels while in use, most used solar panels (even those with decent remaining functionality) are fated for a not-so-eco-friendly afterlife: an eternity in the dump.

Discarded photovoltaic panels pose a quandary for waste managers because they contain both low levels of toxic heavy metals, and valuable elements like silver and tellurium, so they probably shouldn’t just go into a landfill with ordinary refuse like diapers and styrofoam. And as residential panels surge in popularity, more cities are having to figure out what to do with solar trash.

“Local governments are freaked out. They are starting to get solar panels and they don’t know what to do with them,” said Dustin Mulvaney, an environmental studies professor at San Jose State who is working on answers to that question.

But in on that December day in Berkeley, the solar panels didn’t go to a landfill, or a hazardous waste facility, or even some photovoltaic recycling factory. Instead, a crew from the local salvage company Urban Ore intercepted them, hauling the load back to their property across town.

Urban Ore is not your typical secondhand store. While it does have your standard used couches, old cookware, and vintage apparel sections, customers can also choose from a wide selection of, well, homeowner junkyard items. In its cavernous warehouse, and in the surrounding field of blacktop, are rows of used toilets, now clean, of course, and arranged like porcelain soldiers in the back; buyers can nab clawfoot bathtubs, old front doors and windows, even oversized theater scenery.

Urban Ore’s best trashy treasures are often intercepted on their way to the landfill. Every day, the store sends three staff members to prowl the waste-transfer station looking for good finds. Armed with a box truck, and a forklift, they wait to pounce on whatever unwanted items they might sell. The crew grabs bikes, cabinets, sinks, and furniture. But until that fateful winter’s day, they’d never grabbed solar panels before — and they were a little nervous. If none of their customers ended up buying them, the store might have to fork over the fees to dispose of them as hazardous waste.

“It was a bit of a gamble, but we decided we wanted them,” said Max Wechsler, the Urban Ore operations manager.

Wechsler ran tests on the panels and they seemed to be working fine. He priced them at 60 cents per watt of electricity-producing capacity, and then watched as they sold. Some people would just buy one or two, enough to charge a battery for their RV, or provide electricity for their Burning Man campsite. Others bought 30 at a time, enough to cover their roof.

“We sold out and never had a single return,” Wechsler said.

From an electricity standpoint, solar panels are a key part of many proposed climate solutions. From a waste disposal standpoint, Mulvaney says they’re a tsunami about to crash into cities worldwide.

Part of the problem is that every panel will die, sooner or later. The rule of thumb is that the panels lose less than* 1 percent of their efficiency every year. “As the modules age, impurities creep into the crystals and some of the electrons generated by sunlight want to go to those impurities rather than through the electrical circuit,” he explained.

At least in theory, one set of solar panels could last someone for the rest of their life, but many people choose to ditch their panels after only a decade or two. When a homeowner removes old solar panels to fix their roof, for example, some of them will trade up for a newer, more efficient model. Lee-Tan Lu, an environmental science master’s student working with Mulvaney, found that, if people get rid of their photovoltaic panels around the time of their warranted lifespan, it “will result in an enormous amount of waste released into the environment, about 90 thousand tons by 2050 in the San Francisco Bay Area alone.” By that same time period, the nation will have generated around 7.5 million tons of solar waste, according to the International Renewable Energy Agency.

But Wechsler, the Urban Ore operations manager, says we could put a big dent in those numbers if, instead of using panels for 30 years and then throwing them away, we reused them. Even losing .5 percent efficiency per year, he points out, it a panel would still operating at 86 percent after 30 years. “I’m 32, and I’d say I’m operating at about 86 percent efficiency,” he joked. “I’d like to think I’m still worth something.”

Sitting in a (used, of course) chair in his office at Urban Ore on a blazing summer day, Wechsler sipped water from a wide-mouthed mason jar. He was clad in the mufti of a new class of artisan appearing around the United States: leather boots, dark wash jeans, a gray button-down shirt with the sleeves rolled past his elbows, and a vigorous but well-groomed beard.

We walked across the Urban Ore lot, past rows and rows of doors, to a red shipping container. Inside was the latest delivery of panels — a 4-foot line of heavy aluminum-edged modules leaning against each other. These days, Urban Ore gets most of the panels from a single technician, who is happy to have found a place where he can unload them for a small profit*, Wechsler said. Wechsler had priced at 50 cents per Watt (40 cents per Watt for five or more), about half of what you’d pay at a hardware store for new panels. 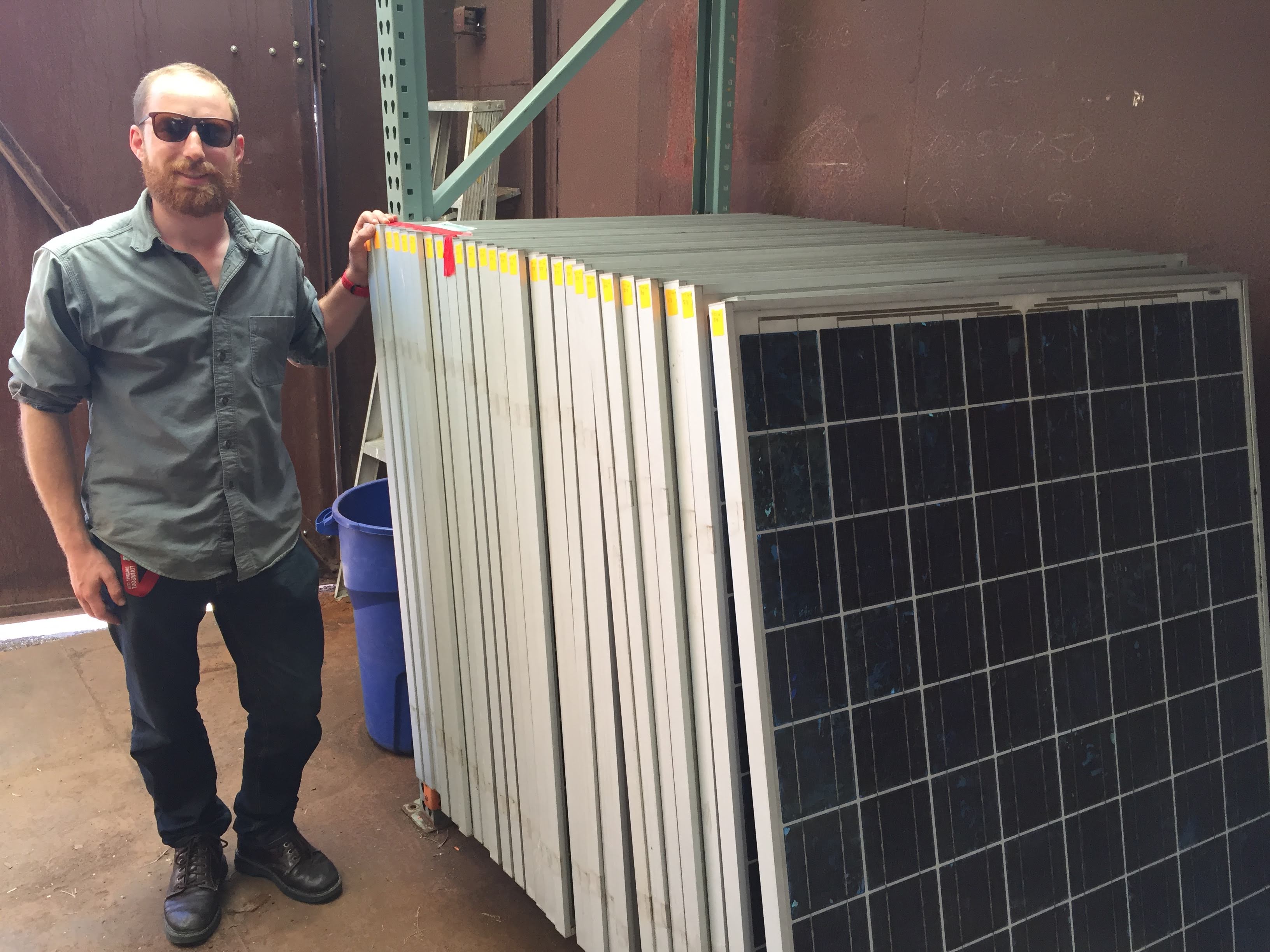 He mentioned that it had been a while since anyone had bought panels from Urban Ore, but when we went to look at the modules in the shipping container, there was a piece of red tape marking ten of them. They’d just been sold.

Wechsler smiled. “These modules still have a lot of life in them,” he said. “We’re thinking this is going to be our next big thing. I just hope there’s enough demand to match all the supply that’s going to be coming in.”

While at least some people are willing to take a gamble on used panels, I talked with several solar experts about reusing solar panels and many were a little skeptical. “Most used panels one would want are relatively young and still in use, and the exceptions likely have issues,” said Wyatt Metzger, a researcher at the National Renewable Energy Laboratory.

With every passing year, photovoltaic technology gets better and cheaper. And the panels themselves are a relatively small part of the total cost of installing a new system. NREL has found that solar companies are charging around $2.60 per watt to install rooftop solar systems, and between 63 and 91 cents of that goes to making and delivering the panels. So you are hiring someone to put in a turn-key system, it probably makes more sense to buy the latest and greatest.

On the other hand, a do-it-yourselfer can avoid a lot of the costs that the NREL includes in its calculation. If you are getting used panels from Urban Ore you don’t have to deal with the price tags that include the marketing, rent, and profits that keep solar companies in business.

Used panels could also have a strong market outside the country. At least one company he’s heard of is sending used panels to Africa, Wechsler said. Even if the panels aren’t as efficient, they could be useful to someone who wouldn’t otherwise have access based on price point. Europe is a couple steps ahead of the United States in reusing panels, and there, according to the International Renewable Energy Agency, a modest used panel market has already as a result of virtual internet platforms such as www.secondsol.de and www.pvXchange.com.

Of course, eventually, the panels will grow too inefficient for any use, and at that point, they may have to be thrown away or recycled. Mulvaney thinks that if we don’t recycle, we may create a shortage of a few key metals. Tellurium, for example, is already a relatively rare metal, and its primary use is to manufacture the film used on solar panels.

Still, the question of what to do with busted panels will be a lot easier to solve if secondary markets keep them in use for 60 years rather than 30. “Waste isn’t waste until it’s wasted,” Wechsler said.

Back at Urban Ore, it was unseasonably hot for the Bay Area as Wechsler and I staked out the solar panels — a reminder of the opportunity for, and urgency of, solar technology. As we walked back to the office at the front of the warehouse, a truck plastered with bumper stickers was turning around in the lot.

“Power to the freaks!” Wechsler shouted, reading one of the aphorisms off the vehicle.

The driver stuck a shaggy head out the window to see who was yelling at him. Once he spotted us, he flashed us a thumbs up, and drove away — another apparently satisfied scrounger.

*This article has been updated to clarify that according to most recent estimates, solar panels lose between 0.5 and 0.8 percent efficiency per year; and that Urban Ore pays a small amount for the solar panels they acquire.