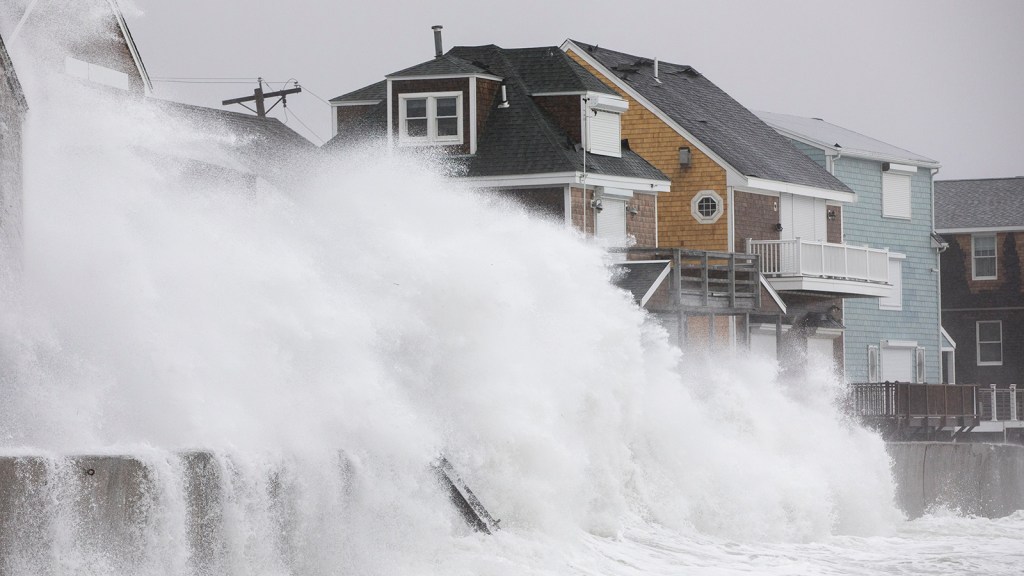 On Friday and Saturday, the winter storm now moving up the East Coast will unleash hurricane-force winds on Washington, blizzard conditions across parts of New York and New England, and inflict the worst coastal flood in Boston’s history.

By all accounts, this storm is a monster. It’s also the latest sign that New England’s long-feared coastal flooding problem is already here — and it’s time to admit climate change is its primary cause.

The storm’s strongest winds will point squarely toward the shore, smashing huge waves the size of three-story apartment buildings into coastal defenses, and roiling the sea as far away as South America. To make matters worse, it’s arriving in conjunction with a full moon, when tides are normally highest. The system is predicted to stall out for more than 24 hours just off the New England coastline — for an astonishing three straight tide cycles.

Although the storm is getting little attention in the national news, the National Weather Service and meteorologists across the Northeast are screaming at a fever pitch. Boston-area municipalities have taken heed, issuing evacuations, preparing dive-team equipment for water rescues, and deploying a temporary flood barrier designed as a climate change-resilience measure. Massachusetts Governor Charlie Baker has activated the National Guard to help with preparations.

Call it a nor’easter, a “bomb cyclone,” a superstorm — in an era of worsening extreme weather, fierce winter systems like this are arriving with startling frequency. And flooding is by far the most dangerous and destructive consequence. This week’s storm, like every weather event, is inseparable from the context of the warming climate. Nor’easters like this one are now a threat to public safety on par with hurricanes, and it’s time we start treating them that way.

This week’s storm is larger in size than Hurricane Sandy, with winds just as strong. National Weather Service in Boston called the storm’s gusts “about as extreme as it gets” and labeled the flooding it will spur a “life and death situation.” In a harrowing statement, the agency warns of massive power outages, the destruction of coastal homes, and some neighborhoods being “cut off for an extended time” from the rest of the metro area. It’s possible that sea walls and other semi-permanent coastal defenses could be breached, or beaches and dunes erased from the map — exposing vulnerable coastal communities and permanently altering the geography of New England.

Nor’easters draw their energy from clashing regions of warm and cold air, often producing massive circulations double the size of hurricanes. Hurricanes usually have much stronger winds at ground level, though, which is why they’re typically more destructive. But as seas have risen across the northeastern U.S. over the past century due to climate change, the flooding impact of what were once relatively routine winter storms has quickly grown.

While hurricanes are also expected to eventually grow stronger, there’s no convincing evidence they clearly have yet — although last year’s hurricane season is a worrying harbinger. Nor’easters are also expected to get worse due to climate change, as warmer air provides them with additional water vapor, fueling their ability to strengthen. Add to that, sea levels in Massachusetts have increased by about a foot over the past 100 years, and should rise by a further 3 to 9 feet by the end of this century.

Winter superstorms that bring high-level coastal flooding to northern locales like Boston are already occurring with alarming regularity. Only 34 hurricanes have passed within 200 miles of the city since 1851 — an average of one every five years. And only nine of these created a significant rise in the tides. Meanwhile more than 90 of the top 100 floods in Boston were spawned by nor’easters, and 13 of the top 20 have happened since 2000.

Though it’s one of the most severe examples in history, today’s storm is not the first one to hit the most densely populated part of the country with the power of a hurricane. It’s not even the first one this year — in January, another “bomb cyclone” floated rafts of ice into flooded Boston streets.

There are around three strong nor’easters every winter, 15 times as frequent as hurricanes — plenty of opportunity for repeat flooding disasters. A study earlier this year showed that record flooding could happen in New York City every five years starting just a few decades from now, largely because sea level rise has transformed nor’easters into coastline-devouring monsters.

Storms like these — technically called “extratropical cyclones,” because they form outside the tropics — don’t come with scary cone-shaped tracking maps like hurricanes or official names that can be blasted across social media. Still, they have quickly become the single biggest threat to coastal development across most of the northeast.

Coastal floods are one of the leading indicators that the world is warming. Given the path we’re on, the worst is yet to come.