BP says it's 80% in agreement with Extinction Rebellion. Huh? 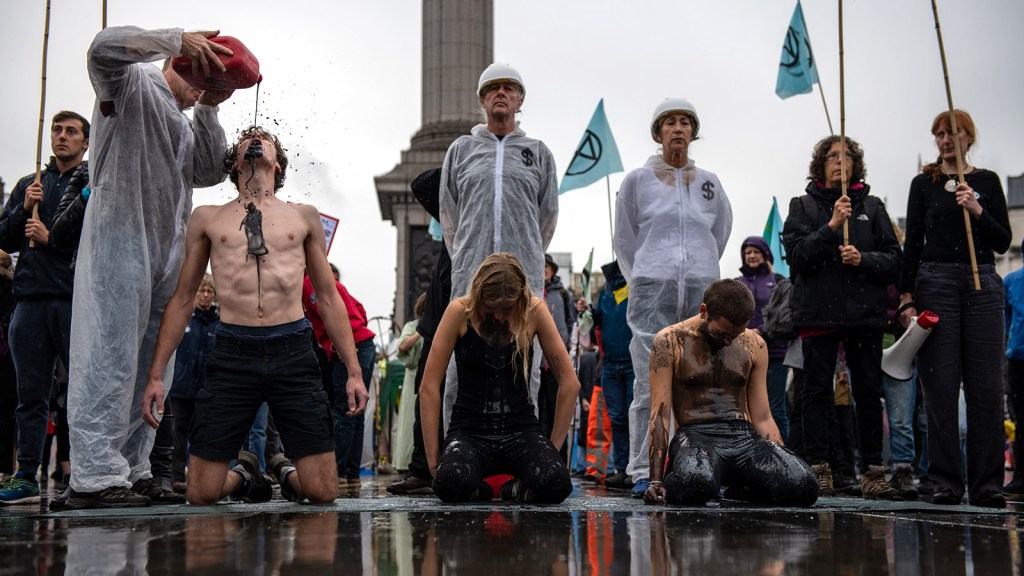 What do British Petroleum, one of the largest oil and gas companies in the world, and Extinction Rebellion, the international protest movement urging governments to take immediate action on climate change, have in common?

According to BP, a lot. BP Chief Financial Officer Brian Gilvary told the Times of London this week that there’s an “80 percent overlap” between BP’s ambitions and those of Extinction Rebellion, also known as XR. When asked what that overlap was, Gilvary said the company agrees with XR that the world needs to be moving a lot quicker to address climate change.

Extinction Rebellion was not convinced. A spokesperson from XR told the Times that “while BP speaks in one direction, they are still walking in the other. Extinction Rebellion asks that we tell the truth, not greenwash.” BP featured heavily in XR’s recent two weeks of protests around the world — notably in a grisly performance piece at the National Portrait Gallery in London where fake-oil-drenched protestors called on the arts organization to reject sponsorship from BP.

Gilvary’s dubious accounting is reflective of a shift in the fossil fuel industry’s strategy as it fights to stay relevant in an increasingly anti-carbon world. Incidentally, the Senate Democrats’ Committee on the Climate Crisis just held a hearing that shed light on how this new greenwashing tactic works.

At the hearing on Tuesday, called “Dark Money and Barriers to Climate Action,” a panel of experts recapped the well-known evidence that fossil fuel companies have funded think tanks, trade associations, and fake “grassroots” organizations to seed climate denialism in the halls of Congress and the minds of citizens.

But they also described a recent shift in how this all plays out. In the late 1990s and early 2000s, companies like Exxon Mobil blatantly published advertisements that cast doubt on the science of climate change, even though internal documents show they knew just how certain it was. Today, they’ve flipped the script. Public professions of climate denial have gone out of style in favor of concerned statements like Gilvary’s. But that doesn’t mean there’s been a change of tune behind closed doors.

Dylan Tanner, executive director of the London-based think tank InfluenceMap, described how in the past year Exxon Mobil and BP have promoted their voluntary methane reductions and publicly disagreed with proposed EPA rollbacks. Meanwhile, the American Petroleum Institute, of which Exxon and BP America are contributing members, successfully lobbied for rollbacks.

“ExxonMobil and BP have given tacit support to the API whilst using PR statements to distance themselves from any negative publicity surrounding the issue,” Tanner said. These companies could require the API to stop lobbying for policies that they supposedly disagree with, but they don’t. Like XR’s spokesperson said, they’re talking in one direction while walking in the other.

Unfortunately, we can’t know about all of the oil and gas industry’s backroom dealings, because some climate denier groups’ funding is untraceable. The panel of experts urged the climate committee to fight for more transparency for ostensibly philanthropic organizations like Donors Trust, which has funneled money to climate denier groups with little oversight. In other words, if big oil companies are serious about aligning themselves with climate activists, it’s time for them to open their books.