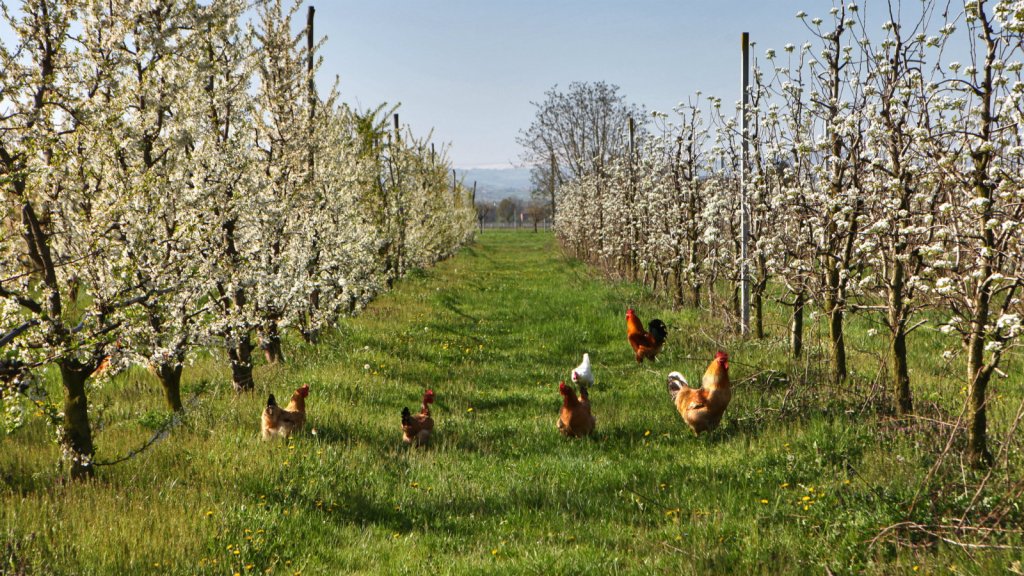 In a grand experiment, California switched on a fleet of high-tech greenhouse gas removal machines last month. Funded by the state’s cap-and-trade program, they’re designed to reverse climate change by sucking carbon dioxide out of the atmosphere. These wonderfully complex machines are more high-tech than anything humans have designed. They’re called plants.

Seriously, though: Plants breathe in carbon dioxide and breathe out oxygen. They break open the tough CO2 molecule and use the carbon to build their leaves and roots. In the process, they deposit carbon into the ground. For years people have excitedly discussed the possibility of stashing carbon in the soil while growing food. Now, for the first time, California is using cap-and-trade money to pay farmers to do it on a large scale. It’s called the California Healthy Soils Initiative.

In April, trucks full of fertilizer trundled into Doug Lo’s almond orchards near Gustine, California, and spread composted manure around his trees. He then planted clover to cover the ground between the trunks. In theory, these techniques will pull 1,088 tons of carbon out of the atmosphere every year. Lo’s is one of about fifty farms getting money from the state of California to pull greenhouse gas from the air. California is paying him $50,000 to try it out.

“We’re trying to sequester some carbon,” Lo said. “It should also help with the water-holding capacity of the soil, and the flowers in the cover crop should feed bees after the almond bloom is over.”

This is the first major utilization of farms as state-sponsored carbon-sucking factories. (To be fair, Oklahoma, of all places, has been experimenting with soil carbon since 2001, albeit on a smaller scale.) Agriculture and climate nerds — we wonkiest of wonks — have been anticipating this for the last decade as the scientific evidence accumulated.

In 2014 we wrote about the people pushing this research in California. And Grist told the story last year of how scientist Jonathan Sanderman put together key pieces of this puzzle after finding jars of old dirt, long forgotten in storage. And just recently, the New York Times Magazine ran a story summarizing the state of the science. But for years it’s felt like a lot of talk and not much action. That’s changing with the Healthy Soils Initiative, which makes money available for farmers like Lo, and monitors the results.

So how do you turn a farm into a carbon-sucking machine? Lo figured the money from the state would allow him to experiment without risk. He made a deal with a compost company to truck manure from dairies across California’s central valley then spread precisely 5.3 tons per acre under his almond trees as required by the state guidelines. An inspector from the California Department of Food and Agriculture showed up on the day the trucks arrived in April to make sure Lo was actually doing the work and not just doing the paperwork. Next, Lo planted clover and other cover crops in the rows between the trees.

A lot is riding on this, but it’s not a foregone conclusion that it will work. In theory, compost and cover crops should get carbon out of the sky and into the ground. But will it work in practice on Lo’s farm? With the farm’s particular soil structure, irrigation pattern, as well as the dirt’s microbiome? We don’t know how fast carbon will accumulate in his soil, or how long it will stay there.

When I asked Lo how confident he was that he was going to get exactly 1,088 tons of carbon into the ground he responded: “Well, that’s just what the soil scientists said. We’re going to see I guess!”

As of last Thursday the soil samples on Lo’s farm haven’t shown an increase in carbon content, but it takes about three years for compost to break down, he said. Other farmers and state officials will be watching this rollout of carbon-sucking farms closely. And if it works, and these farms manage to capture enough carbon, program could scale up massively. California’s Healthy Soils Initiative could serve as a model for other states.