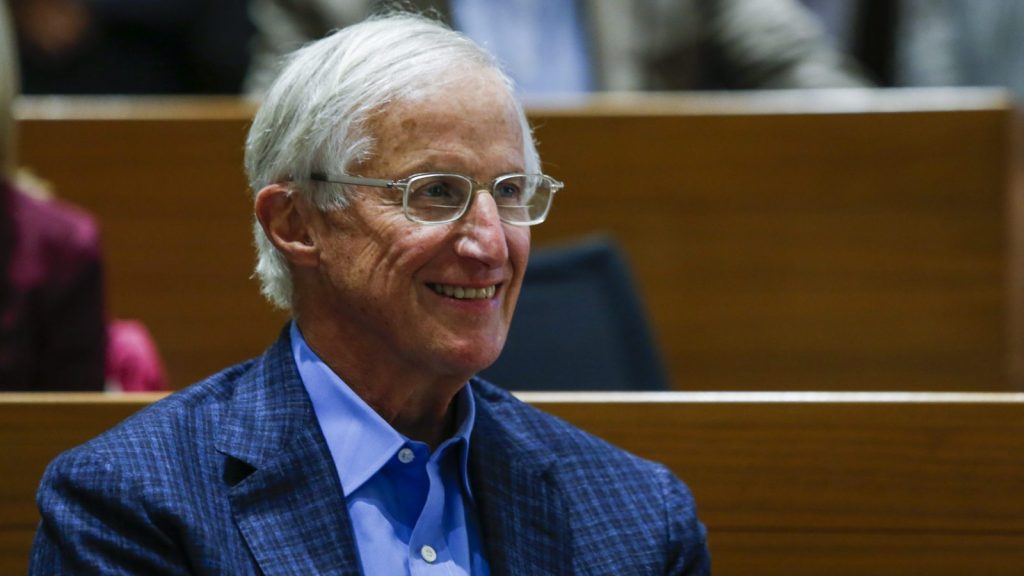 Apologies, future generations: The world has been totally slacking on carbon taxes. And the Nobel prize committee may be trying to give us a hint.

The panel awarded its latest economic prize this week to William Nordhaus, a professor at Yale and the father of climate change economics. He’s best known for creating a model that simulates how the climate and the economy coevolve. It’s now widely used to project the outcomes of climate policies like carbon taxes.

The Nobel committee lauded him for showing that “the most efficient remedy for the problems caused by greenhouse gas emissions would be a global scheme of carbon taxes that are uniformly imposed on all countries.” Nordhaus received the prize on Monday along with New York University economist Paul Romer.

“I wouldn’t say that it’s a coincidence that Nordhaus and Romer won this year,” says Christopher Knittel, a professor of applied economics at MIT. “They both work on sustainable growth. I think the committee probably understands we’re on a path toward unsustainable growth. Their choice underscores the need for policymakers to act.”

A day earlier, the world’s top scientists sent a similar message in a gigantic, comprehensive report outlining the various way we can try to keep the planet habitable. A carbon price “is central to prompt mitigation,” the report says, though “a complementary mix of stringent policies is required.”

It’s a timely reminder. Although there are some regional cap-and-trade programs up and running in California and the Northeast, there’s nothing resembling a carbon tax in the U.S. So here’s another coincidence: The closest thing yet, a “carbon fee,” has a chance of passing next month in Washington state — assuming the multi-million-dollar campaign by oil companies doesn’t convince voters it’s a bad idea.

Washington state’s Initiative 1631 would charge $15 per ton of carbon dioxide, ramping up by $2 per year until the state hits its climate goals. Researchers say an effective carbon price would need to be quite a bit steeper — something in the $40 to $50 range, according to Knittel.

And any effective carbon price would need to rise really fast. Limiting warming to 1.5 degrees C above pre-industrial levels would take a carbon price of at least $135 per ton by 2030 — and possibly as high as $5,500 per ton, according to the U.N. report. If that sounds astronomical, it’s just a fraction of the kind of carbon price we’d need by the end of this century: somewhere between $690 to $27,000 a ton (yes, that’s 27 with three whole zeroes!).

So … better late than never? Knittel says the real power of a state-level carbon tax policy is that it could serve as a demonstration for a nationwide policy. That could come in handy if, say, an administration that actually wanted to act on climate change ever came into office.

Carbon taxes may sound like the most boring, straightforward thing in the world, but they remain controversial (and not just in Trump Nation). Just look to Canada, where Ontario’s premier, Doug Ford, has launched a crusade against carbon taxes. “The carbon tax is the absolute worst tax for Canadian families, Canadian businesses, and the Canadian economy,” he tweeted last week. Ford launched a legal challenge against Canada’s federal carbon tax plan in September. People on the other side of the political spectrum have it out for carbon taxes, too.

“If I had the time and heart to comment on Nordhaus’ Nobel, it would be to simply say that Nordhaus was wrong, in ways that may have done as much damage as it’s possible for an economist to do,” wrote climate advocate Alex Steffen in a Twitter thread. “[P]utting the weight of economic authority behind carbon pricing as the only effective strategy for action, helped exclude bolder, and — it turns out — more realistic strategies for regulation, public planning and technological disruption.”

The U.N. scientists acknowledge the many barriers to getting effective carbon taxes passed. The report says carbon prices are a “necessary ‘lubricant’” (their words, not mine!) for climate action, though not enough on their own. That’s because of “a persistent ‘implementation gap’ between the aspirational carbon prices and those that can practically be enforced.”

“The policies are lagging very, very far — miles, miles, miles behind the science and what needs to be done,” Nordhaus said shortly after winning the Nobel. “It’s hard to be optimistic. And we’re actually going backward in the United States with the disastrous policies of the Trump administration.”

Knittel says carbon taxes still make sense, despite the high cost. “By delaying it, it means the right carbon tax was harder than it would have been,” he says. “It’s more costly to act now, but that doesn’t reduce the necessity to act.”