Washington state will likely vote on a carbon price in November. The oil industry's already fighting it. 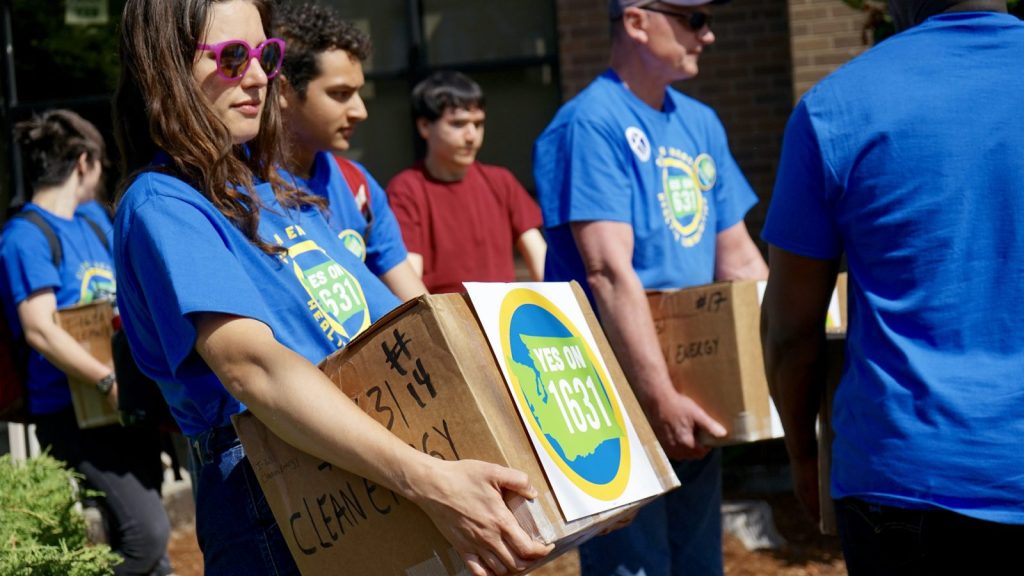 Washington state will likely vote on a carbon price in November. The oil industry’s already fighting it.

A bunch of heavy boxes arrived in the Washington state capital on Monday morning. They were filled with thousands of petitions in support of the proposed “Protect Washington Act” — a first-of-its-kind “carbon fee.”

Initiative 1631 has collected nearly 380,000 signatures from Washington voters — 120,000 more than necessary for it to appear on the ballot this fall. If voters pass the measure in November, Washington would be the first state in the country to adopt anything like a carbon tax.

“We’re all set,” says Nick Abraham, communications director at the Yes on 1631 campaign. “It’ll take a week to two weeks to certify and verify all the signatures, and then we are officially on the ballot.”

375,000 signatures being turned in for clean air initiative 1631. #komonews pic.twitter.com/1XUi9MZAlv

It’s one of three carbon pricing efforts to watch in the United States this year. In Washington, D.C., Councilmember Mary Cheh is expected to introduce a “carbon fee” bill to the district’s progressive city council this month. The Massachusetts state legislature is also mulling over a (somewhat vague) carbon price.

Washington state’s proposal would charge industrial emitters $15 per metric ton on carbon emissions starting in 2020, ramping up by $2 per year until Washington state meets its climate goals. The revenue raised would go toward investing in clean energy, protecting clean water and forests, and helping to make sure the communities that suffer the most from carbon emissions prepare for the effects of wildfires and sea-level rise.

Surprise, surprise — major oil and gas companies are already trying to fight it. The Western States Petroleum Association recently formed the “No on 1631” political action committee. The Seattle Times reports that the PAC has the support of the big guys, like BP, Shell, Chevron, Phillips 66.

So far, opponents to the carbon fee are arguing that prices will rise at the gas pump, hitting average people where it hurts. Mark Funk, a spokesperson for No on 1631, told the Seattle Times that the fee would “place the burden for initiative squarely on middle-income and lower-income people.”

The PAC has already paid more than $130,000 in fees to a national consulting firm that helps wage battles over ballot measures, Winner & Mandabach Campaigns. (The company’s website boasts that it has a 90 percent success rate.)

The carbon fee initiative has something going for it, though. It’s backed by more than 200 groups across Washington state, from labor groups and faith communities to tribal nations.

“This is the largest and most diverse coalition in the political history of the state,” says Aiko Schaefer, director of Front and Centered — an alliance of organizations advocating for low-income residents and people of color that played a key role in drafting the initiative.

The Yes on 1631 campaign is going to be knocking on doors and making phone calls, Abraham says, working to educate people all over the state about climate change and what the initiative could do for their local communities. It’s also focusing on mobilizing voters.

“Polls show that people of color care deeply about these issues,” Schaefer says. “Our job is to show them that they have an opportunity to act on that concern this November.”

Polls have shown that both Latinos and African Americans want climate action more than the population at large. More than 80 percent of Latinos, for instance, support a carbon tax on fossil fuel companies, according to a 2017 survey from the Yale Program on Climate Change Communication.

Just two years ago, Washington voters rejected a revenue-neutral carbon tax. Kyle Murphy, executive director of Carbon Washington (the group behind that 2016 attempt) says his group supports the new campaign — and he has some advice.

Murphy says grassroots organizing is the best way to counter the oil and gas industry’s message. “People will always believe their neighbors, the local firefighter, or the local clergyman over ads on TV from the oil industry,” Murphy says. “It’s gotta be normal people, regular people out there fighting for this.”

The initiative also has to find a way to reach voters in the middle of the political spectrum, he says: “We need some sliver of Republicans and moderates to join Democrats in passing something here.”

Public opinion polls say that almost 70 percent of Washington voters would support a measure to regulate carbon pollution; that includes more than half of Republicans. One of the big challenges for the I-1631 campaign, Murphy says, is convincing people that this initiative is the one that they want.

That, and of course, the fossil fuel industry. Schaefer says that she knows they will do everything they can to fight the initiative. But she still feels confident.