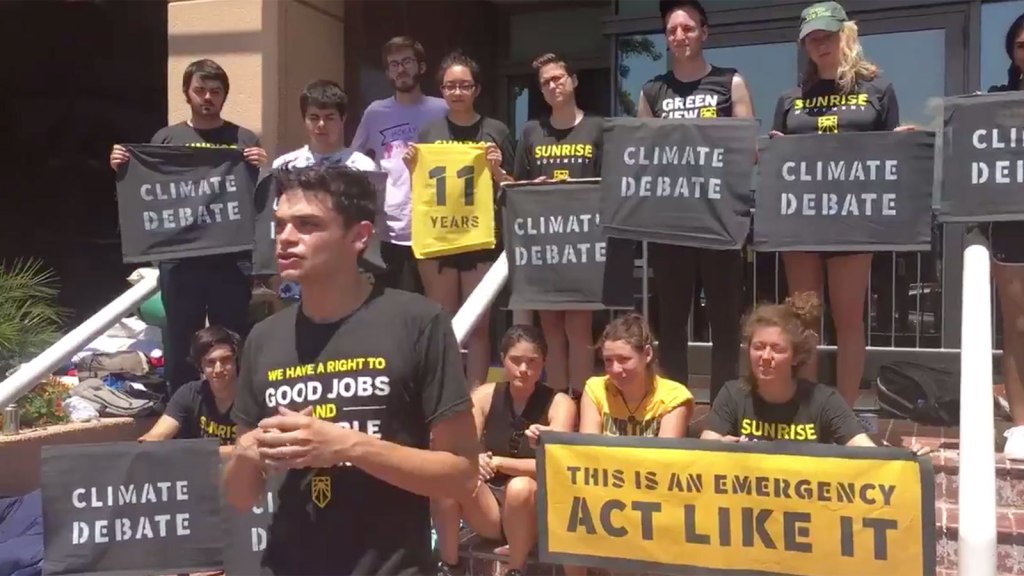 Ten candidates will take the stage at the first official Democratic National Committee debate tonight in Miami, Florida. But a question already looms over the festivities: Should the DNC host a climate-themed debate?

A swath of Democratic candidates, led by self-proclaimed climate candidate Jay Inslee, have come out in favor of such a debate. But last month, committee head Tom Perez tried threw a wet blanket on the idea. Not only will the DNC not host a climate debate, candidates who participate in a non-DNC-sanctioned debate will be disqualified from future debates.

Perez’s statement might’ve rattled some of the candidates, but climate activists aren’t taking no for an answer.

On Tuesday, 100 Sunrise protesters started protesting on the steps of the DNC headquarters in Washington, D.C. And dozens of activists stayed the night and were still protesting as of Wednesday afternoon.

They plan to host a debate watch party on the DNC steps tonight; it’s unclear at this point whether the group will stay put to protest the second debate on Thursday night.

This strategy — taking the fight for a climate debate directly to the DNC headquarters — is a change of plans for the group in their enduring quest to put climate change at the center of American politics. Originally, the Sunrise Movement had planned to mobilize thousands of volunteers across the country to attend the second Democratic debate in Detroit in July. But after a slew of high-profile candidates released ambitious climate plans, and Perez handed down his decree, the group shifted gears and decided to build up grassroots support for climate action in key regions across the U.S. instead.

What can we expect from the Sunrise Movement now that a mass-demonstration in Detroit isn’t on the table? “We need massive mobilization and disruption in every corner of the country unlike anything we’ve seen in our lifetimes,” Sunrise Movement Executive Director Varshini Prakash said in an email to supporters. Looks like the climate activists are here for the long haul.