Watch out, Big Oil. Jay Inslee's back at it again with a greenhouse gas fee. 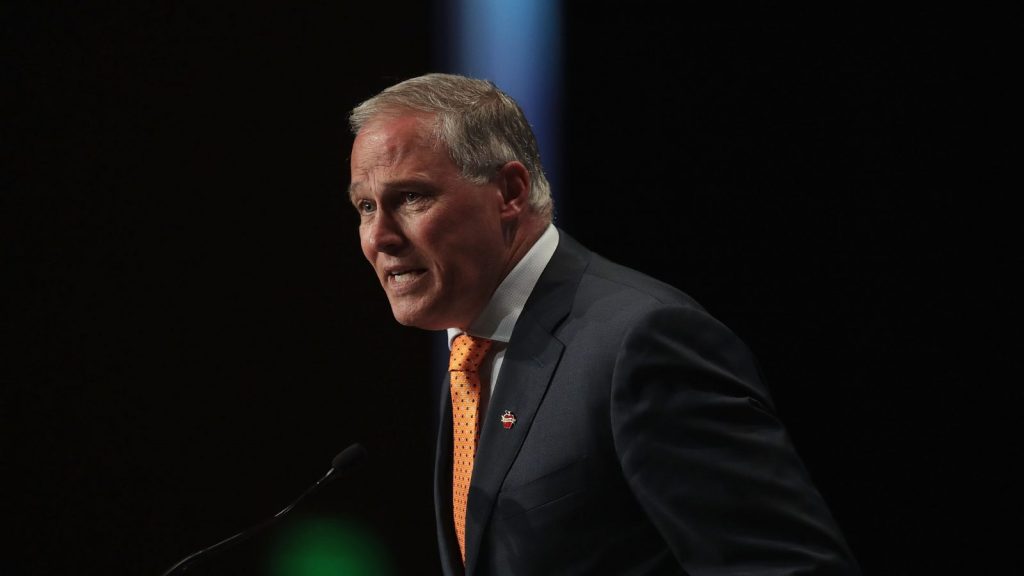 Watch out, Big Oil. Jay Inslee’s back at it again with a greenhouse gas fee.

Adding to his growing stack of policies aimed at averting the climate crisis, Washington Governor Jay Inslee, one of the 23 Democrats running for president, announced Monday the fourth part of his Climate Mission. No other candidate has released as many proposals centered on warming — but then again, no other candidate is trying to win the right to face Donald Trump on a platform solely centered on it.

Inslee’s Freedom from Fossil Fuels plan seeks to establish a new national energy strategy — and it provides a blueprint for kneecapping the fossil fuel industry. It’s comprised of 16 policy initiatives grouped under ambitious priorities like phasing out fossil fuel production, ending the $20 billion in annual fossil fuel subsidies, and beefing up corporate transparency. This is the most fleshed out candidate strategy for how the federal government can ease the United States off of fossil fuels and onto renewables.

Inslee calls these goals ambitious but achievable, and as with many of his climate proposals, notes that they’re “based on successes in Washington state and other communities all across America.” Inslee has a slew of recent achievements he can point to as evidence that he’s moving the needle: a 100 percent renewable energy by 2030 mandate, a state-wide ban on fracking, and a building efficiency bill, among other things.

But not all of the climate initiatives the governor has either offered or backed have been successful in Washington state. And one of them, a carbon price, has failed three times in various forms. Which is why the inclusion of a “climate pollution fee” in the Freedom from Fossil Fuels plan is curious. After all, it hearkens back to Inslee’s highest-profile failures in this arena.

When Grist asked the governor about his state’s trouble pricing carbon in April, he appeared to be cooling on the whole idea. “I would always look for new solutions if an old solution wasn’t working,” he said. “It’s called basically not being braindead.” Well, Inslee managed to stave off his hankering for pricing carbon for his first three policy rollouts. But he ultimately couldn’t quit the idea.

Inslee’s perseverance might be a good thing. Some environmentalists, like OG climate hawk James Hansen, have argued that a carbon tax is essential. And a slew of oil companies, CEOs of major corporations, and Republican economists agree.

So let’s take a closer look at this “fee” as the governor likes to call it.

The Democrat says he would work with Congress to set the price, which would start low and rise “steadily and aggressively over time.” (For reference, the latest ballot initiative in Washington state, which failed to pass last year, began at $15 per ton of carbon.) The fee would only apply to certain economic sectors, though Inslee doesn’t say which sectors will get tapped. And it appears that the money generated by the fee would go towards things like transitioning to a green economy, supporting front-line and low-income communities struggling with the aftermath of climate disaster, and spurring economic development.

A new twist in Inslee’s plan is that carbon dioxide isn’t the only pollutant regulated by this proposal. Methane, F-gases (synthetic gases used as refrigerants, among other things, that can stay in the atmosphere for centuries) and other greenhouse gases will also get a fee, priced by the risks each gas poses. And lest we forget that American’s aren’t only consuming products produced by U.S. companies, Inslee’s plan also proposes a “carbon duty,” to be imposed on imports of products manufactured or grown in countries that don’t adhere to the new and beefed up Paris agreement his third policy rollout proposed.

It’s an ambitious proposal, particularly taking into account the fact that pricing carbon is a tough sell — especially when the fossil fuel industry marshalls tens of millions of dollars to thwart these efforts, as it did in Inslee’s state last year. In 2018, a congressional Republican-led resolution to “condemn” carbon taxes passed with flying colors. And GOP legislators in Oregon literally ran away from the capitol in Salem when they were faced with voting on a proposed cap-and-trade bill that the Democratic majority was poised to pass.

Ultimately, Inslee is betting that the fourth time’s the charm when it comes to getting his constituents (or a legislative branch) on board with a carbon price. And while it seems like a long shot, it’s certainly not as big a long shot as Inslee himself — climate bona fides and all — still appears to be. An Economist/YouGov poll released last week has the governor and climate candidate polling below 1 percent in the jam-packed Democratic field.