Climate change means wild weather. Does that include snowstorms? 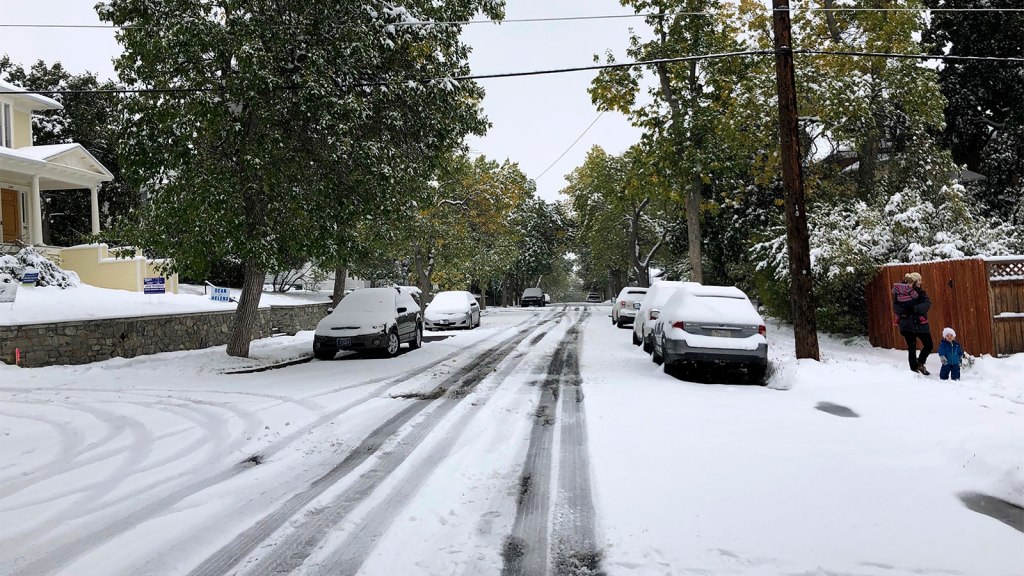 Climate change means wild weather. Does that include snowstorms?

If it seems like just last week that summer ended, you are correct — so why does the first day of October look like the dead of winter in the Northern Rockies? Over the weekend, Montana Governor Steve Bullock issued a state of emergency after an unusually intense “winter” storm dropped 48 inches of snow on some parts of the state.

This year has already included a slew of record-setting weather events in the Northern Hemisphere, all courtesy of climate change. Heatwaves across Europe and the Arctic made this the hottest summer ever recorded, the midwestern U.S. is still recovering from terrible floods, and we’re currently in the middle of an unusually intense hurricane season.

So where does Montana’s pre-Halloween winter wonderland fit into all that? If you’re reading this, you probably know that weather and climate are not the same thing, and extreme winter weather doesn’t refute the existence of climate change. (Seriously, y’all, it’s 2019 — don’t be that senator who brought a snowball into Congress to disprove global warming.)

But could the Montana storm have been caused or exacerbated by climate change? Yes. Meteorologists and atmospheric scientists caution that more research is required to know exactly how big a role climate change played in this weekend’s storm, specifically. But it’s possible, and even likely, that climate change contributed to, and intensified, the conditions that made a storm this big possible.

The first mechanism by which climate change could have affected the storm is pretty basic: Warming temperatures lead to evaporating water, which leads to a wetter atmosphere, which leads to more precipitation.

“[A]ll storms are influenced to some degree by climate change because the environment is warmer and moister than it used to be,” said Kevin Trenberth, a scientist at the National Center for Atmospheric Research. Since weather events are determined by factors specific to each situation, Trenberth didn’t think it was accurate to say the storm’s strength was entirely due to climate change — however, “the potential for bigger snowfalls in spring and fall is one of the signatures of climate change.” (Heavy snowfall in Montana this early in the fall is unusual, but not entirely unprecedented — the first snow of the season in 1992 in Great Falls was on August 22.)

There might be another, slightly more convoluted way climate change is affecting the weather that basically boils down to this: Rising Arctic temperatures are messing with the jet stream.

Jet streams are currents of wind way up in the atmosphere (at the altitude planes fly, hence the name) flowing west to east along the boundaries between hot and cold air. There’s one above the northern U.S., and it’s a key player in determining a lot of the region’s weather.

Jennifer Francis, a scientist at the Woods Hole Research Center, studies how Arctic warming affects the weather in the rest of the northern hemisphere. She said a “contorted jet-stream configuration” was “a less direct connection” between climate change the storm — “and much more controversial, but a topic of active research.”

It’s normal for jet streams to have some north-south fluctuation. But with the melting of cold-retaining sea ice, the Arctic is warming faster than the rest of the hemisphere, which researchers like Francis think is making the jet stream slower-moving and wavier as the difference in temperature between the Arctic and land further south decreases.

Francis explained that “unusually warm ocean waters off the west coast and around Alaska” — the result of melting sea ice — helped caused the jet stream to dip so far south, setting up the conditions for this weekend’s wet, heavy storm.

“An early snowstorm like this could have occurred through random chance, but there’s no question (in my mind) that climate change has made it worse,” Francis said.

Scientists have long warned that climate change will bring more frequent, wetter, and slower-moving storms. If this weekend’s storm shows us anything, it’s that that doesn’t just mean hurricanes. “I’d say the dice are loaded in favor of more unusual weather events this winter,” said Francis, “but it’s hard to say who will be affected the most.”