Coal climbs back into the conversation at U.N. climate talks 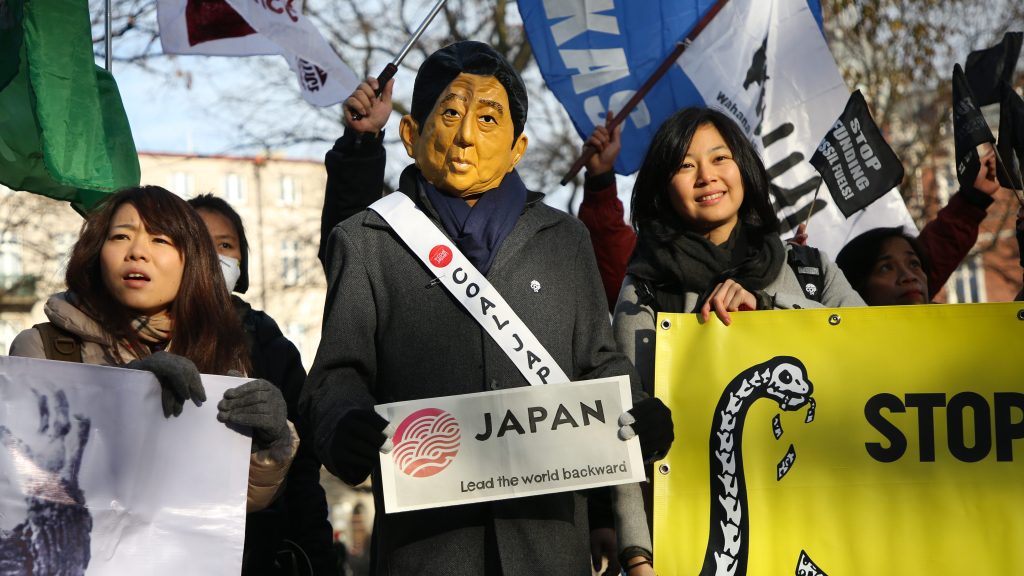 Activists attend the March for Climate at COP24 in Katowice, Poland. Beata Zawrzel / NurPhoto via Getty Images
back in black

Coal climbs back into the conversation at U.N. climate talks

KATOWICE, POLAND — Coal has received a surprising amount of attention at this year’s round of U.N. climate talks. But instead of focusing on how to keep it in the ground, discussions have centered on how to dig more out.

All this talk of coal is jarring, given that this is meant to be a conference about solving climate change. Earlier this year, the U.N.’s Intergovernmental Panel on Climate Change delivered a crushing verdict on the future of coal: If the world is to avoid more than 1.5 degrees Celsius (2.4 degrees Fahrenheit) of average global temperature rise — at which point we could see meaningful increases in heat waves, droughts, sea-level rise, and more — then the use of this fuel must drop to almost zero. Countries are supposedly gathered here in Katowice, Poland, to figure out how to not cross that threshold, so the high-profile intrusion of the coal industry has been unwelcome and worrying.

“It seems like the conversation around coal, with respect to climate change, has really been set back a few years at this COP,” says Jesse Bragg, media director Corporate Accountability, a non-profit that polices transnational corporations. “In two weeks’ time, they’ve managed to mainstream coal again in the conversation.”

The U.S., Poland, Australia, and Japan are among the countries that have cozied up to fossil fuel companies in Katowice, in some cases inviting them into their pavilions to extol the virtues of coal to anyone who’ll listen. To varying degrees, representatives of these governments have taken on the role of cheerleaders for the industry themselves. Note: These are the same people providing the political guidance to the diplomats who are negotiating climate deals.

The presence of the coal industry at the U.N. climate negotiations is nothing new. I attended my first conference, COP19, five years ago. It was a few hours north in Warsaw, and the spectre of coal loomed large. To activists’ outrage, the World Coal Association, a lobbying group, was holding a sideline summit that wasn’t part of the main conference. I remember heavy security and activists unfurling a banner from the roof of the building where the event took place.

In the last five years though, something has changed – and that has permitted coal interests to worm their way into the heart of the talks.

While negotiators were trying to create a global regime that could all but ban coal, Poland hosted an event featuring the coal company – and COP sponsor – JSW. It took place at the conference center, and included a keynote speech by Grzegorz Tobiszowski, Poland’s deputy minister of energy. “We must maintain a coal-based economy,” he said. “There is still a place for coal. We will reduce emissions, we will go forward, but pragmatically.”

Wells Griffith, President Trump’s advisor on climate change, took an even more confident tone as he celebrated America’s coal resources, speaking on Monday to a momentarily-packed room, before activists staged a walk-out. “To achieve economic growth and eradicate poverty, all energy uses are important, and they will be utilized unapologetically,” he said. “We strongly believe that no country should have to sacrifice their economic prosperity or energy security in pursuit of environmental sustainability.”

He was joined on a panel by Patrick Suckling, Australia’s ambassador for the environment, and head of his country’s delegation here in Katowice. Suckling’s appearance led to concerns that other right-leaning governments have been emboldened by the bravado of the Trump administration. (Interestingly, Suckling appeared at the event with a U.S. flag on his nameplate.)

Australia’s position may have arisen thanks to its own conservative, pro-coal government, but the same was true at the Warsaw climate conference five years ago, says Richie Merzian, climate and energy director at The Australia Institute, a progressive think tank. In 2013, Australia was led by its then Prime Minister Tony Abbott, a far-right politician who had described carbon pricing as “socialism masquerading as environmentalism.” Despite such proclamations, the country adopted a much meeker attitude when push came to shove.

“Australia kept a lower profile, didn’t do anything as antagonistic as get involved in a prolific pro-coal event, and when isolated on positions – like blocking loss and damage – eventually caved in,” Merzian says. “The big difference was Obama.”

Japan also held an event this week on carbon capture and storage, which the coal industry has embraced as a way to keep power plants in business while meeting climate targets. However, the technology has yet to make the necessary commercial breakthrough that would allow it to be deployed at scale, and environmental groups have rejected it as an expensive distraction in the fight against coal. Earlier this week, Al Gore dismissed carbon capture as “nonsense”.

The real question, perhaps, is whether this assembly of coal aficionados and the growing influence of a U.S. that has already announced its withdrawal from the Paris Agreement has swayed the negotiations themselves — or on the climate “rulebook” that diplomats have been crafting here in Katowice.

Observers believe that it has. They pointed to greater advances being made in areas like carbon markets, which are backed by corporations like Shell, while progress on climate finance for poorer nations has been slow.

On the individual country level, Merzian cited Australia’s silence on topics like the 1.5-degrees-C goal and some of the details on how it would meet its Paris goals — including the likely use of “dodgy” credits to count its emissions — which caused it to break ranks with some of its traditional allies, including New Zealand. Both Australia and the U.S. have also backed out of a so-called High Ambition Coalition, a collection of nations pushing for more urgent action that includes the European Union, the Marshall Islands and Canada.

It’s a reminder that the UN climate process is, to some extent, at the mercy of national governments, their policies, and their presidents. It has been 24 years since the first U.N. climate conference, and it’s clear that the Paris Agreement did not bring about the game change many had hoped for: Here in Katowice, coal is still king.