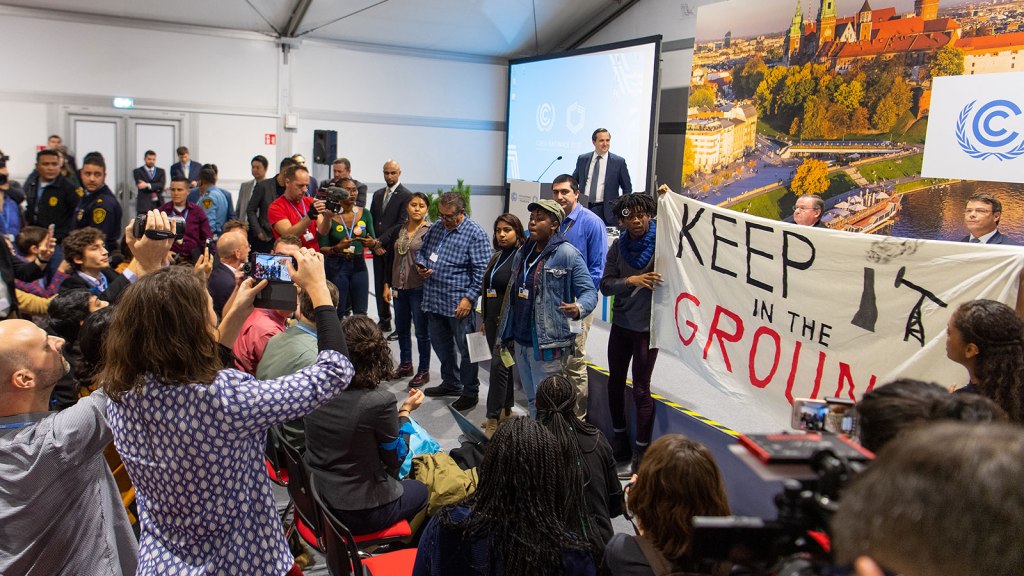 KATOWICE, POLAND – In the middle of the Trump administration’s event to promote fossil fuels at the United Nations climate conference on Monday, the audience erupted into laughter. The laughter was the beginning of a protest, organized by a group of youth and indigenous organizations from the United States, a raucous response to yet another attempt by the Trump administration to tout fossil-fuels.

“Keep it in the ground!” protestors shouted, crowding the stage and blocking the panel — led by Wells Griffith, President Trump’s energy adviser — from view.

“My government has betrayed me,” said Vic Barrett, a 19-year-old protestor who is also one of the plaintiffs in the landmark climate lawsuit against the federal government. “They are perpetuating the global climate crisis.”

While Griffith and the rest of the men on the panel smirked and shifted awkwardly, a succession of young activists gave speeches, then marched out of the room, shouting “Shame on you.”

This was one of numerous protests launched by young activists over the past week. Along with the official delegations from almost 200 countries, young people from all around the globe have converged on Katowice to share strategies and plans for action.

“The reason that we’re out here is to encourage other youth across the world to take action and really care,” said Michael Charles, a member of the Diné tribe and the Navajo Nation.

Their lobbying, cajoling, and colorful, enthusiastic protests are in stark contrast to the painfully slow process of international negotiation. In many rooms of the Katowice’s gigantic Spodek conference center, suited delegates are grappling over hundreds of sometimes minute disagreements in the text of the new Paris “rulebook.”

These heads of state, diplomats, and dignitaries are trying to hash out their differences over what has been called “Paris 2.0.” The rulebook that they develop will guide how governments implement the landmark Paris agreement. The problem is, they rarely agree. They’re divided on questions of who will pay for what and how to measure and track emissions reductions. And they are still trying to address the terrifying gap between rapidly increasing emissions and slowly advancing efforts to curb them.

But the young attendees at COP 24 keep pushing forward and learning from one another. “I come from a country that does not really acknowledge climate change,” a medical student from Egypt told Grist. “It’s not a priority for us. So it’s a very unique experience to see all the negotiations, all the youth activists, and learn about the efforts they are doing in their home countries.”

In Sweden, a teenager named Greta Thunberg is going on strike from school every Friday. In Australia, thousands of students are protesting government inaction on climate change and the construction of a new coal mine in central Queensland.

Here in Katowice, young people have to walk a fine line between either supporting or disrupting the delegations of their home country. Some activists are at COP24 to lobby negotiators on specific policies, like including human rights in the agreement and providing increased adaptation funding for developing countries.

But they’re aware government negotiators may not respond to their lobbying. “They do like to talk to us, and they are very open — but we don’t actually know how much they take our voices into consideration,” said João Henrique Alves Cerqueira, a young activist from Brazil.

Even when government negotiators are open and available, they are restrained by political pressures. “There’s an acknowledgement that what they do is not national policy,” said Eilidh Robb of U.K. Youth Climate Coalition, referring to negotiators from the U.K. “And they negotiate currently in the EU block – so to an extent we’re limited in what we can push, because they’re limited by an entire continent of voices and opinions.”

When working with delegations fails or falls short, young people turn to protest. Loudly. Almost every day in the hallways of Spodek, amid suited politicians and dignitaries, activists sing and chant their way to a better future. Last week, a group of young people presented the People’s Demands for Climate Justice, calling for an end to fossil-fuel extraction and an increase in financial support for developing countries. Other protests have pointed to the health consequences of climate change and criticized the role of big corporations in negotiations.

Poland’s security forces have cracked down on demonstrations, setting special rules banning spontaneous protests during the conference. Activism within the conference center is tightly controlled — some groups were told that even taking a photo with matching shirts was in violation of policy.

On Saturday, when thousands of conference attendees and environmentalists from across Poland and the rest of the continent staged a climate march in Katowice, they were met by heavily armed police officers in full riot gear. “What do we want? Climate justice! When do we want it? Now!” marchers chanted, as the officers paced the sidelines.

Meanwhile, inside the conference center, negotiators fought over whether to  “welcome” or “note” the recent, devastating IPCC report. When the U.S. and Russia (joined by Saudi Arabia and Kuwait) refused to “welcome” the report, the text was dropped entirely.

It felt like two different conferences — one old and one new, a generation with power and a generation struggling to take any action possible. “Wake up! Wake up!” marchers shouted, waving flags and banners. “It’s time to save our home.”