Cory Booker talks about the need to tackle 'corporate villainy' 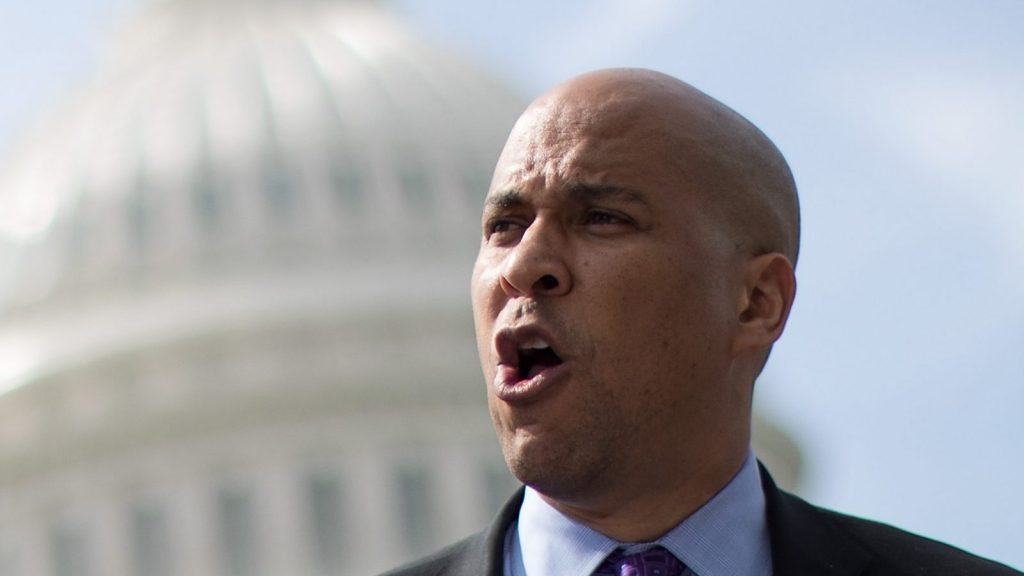 Cory Booker talks about the need to tackle ‘corporate villainy’

On Oct. 23, Senator Cory Booker, one of the members of Congress most capable of harnessing bipartisan cooperation, introduced the Environmental Justice Act of 2017, which was devoid of one Republican sponsor. If passed, the bill would force the federal government to strengthen legal protections for communities of color and low-income people. However, as Charles Pierce wrote in Esquire.com, while this bill is necessary, it “doesn’t have a snowball’s chance in the Salton Sea of ever making it to the floor, let alone getting a vote.” SkoposLabs gives the bill a 4 percent chance of enactment. Representative John Lewis has been trying to pass an environmental justice law since 1992, but to no avail. To understand why Booker won’t give up on legislation that has such a lengthy record of failure, it’s important to understand something about the history of environmental justice federal policy.

It was this week 25 years ago when the head of the U.S. Environmental Protection Agency, Bill Reilly, a Republican, heeded the advice of a task force he assembled on environmental pollution in communities of color and announced that he was opening the Office of Environmental Equity. This was under a Republican president, George H. W. Bush, back when Republicans were into this kind of thing. Bush didn’t give the office any money to work with, though. It was a gesture to show that that the federal government took seriously the environmental grievances of activists from these communities.

This racial equity experiment later became the Office of Environmental Justice, and President Bill Clinton expanded its resources and its mission: In 1994, Clinton signed Executive Order 12898, which stated that every federal department and agency, not just the EPA, must consider the potential harmful impacts of proposed projects on disadvantaged communities in their decision-making processes. This helped open up pathways for environmental justice advocates to sue to stop permits and sitings of polluting entities such as waste incinerators, toxic landfills, and smelting plants.

New Jersey was an incubator of this emerging genre of law, which drew upon the Civil Rights Act, the National Environmental Protection Act, and language from Executive Order 12898 to make its case. Attorney Luke Cole was a pioneer in this field of law and scored a pivotal court victory in Camden, New Jersey, in 2001 that stopped the building of a cement plant in a black neighborhood that was already plagued with polluting facilities. This would have been a major precedent-setting win, except that a few days later, the U.S. Supreme Court ruled in Alexander v. Sandoval that private parties had no right to sue in cases where no intentional racial discrimination had been found. This effectively scaled back the work of lawyers like Cole, who were trying to make the case that federal waste and permitting policies were having a harmful disparate impact on black, Latino, and Native American communities.

This also meant that only the EPA was authorized to conduct investigations and make determinations as to whether companies were clustering their polluting activities in black and brown communities, but this was not the agency’s forté. Hence, the agency dragged its feet for years on these investigations, assembling a backlog of hundreds of environmental justice complaints in the process, of which it made just one final determination of racial discrimination earlier this year after the Center for Public Integrity exposed its failures.

Which is why Booker’s law is important: One thing that it does is restore the private citizen’s right to sue over these matters, so they don’t have to wait for the EPA. Waiting for Scott Pruitt and Donald Trump to enforce environmental justice protections is out of the question.

But Booker is not new to this fight. He has been working to strengthen environmental justice policies since he served as mayor of Newark, under somewhat hostile conditions as well. While his latest legislation is national in scope, the impacts would be felt most acutely, if passed, in cities and communities. Imagine if there had been a policy that required Michigan to consider all possible harms to historically disadvantaged black families in Flint before it made that fateful decision to switch out its water source. Actually, one already existed, with that requirement. But it is only an executive order, which exposes the limitations of that policy medium. Booker’s law would force government officials to make these considerations to protect cities like Flint that are already vulnerable to environmental crises.

Citylab spoke with Booker to discuss the scope of his law and what he hopes it will accomplish.

Q.There have been many attempts to pass environmental justice laws over the past couple of decades. Can you talk about what makes this particular moment important to introduce this legislation?

A.We now have a lot more longitudinal data about some of the challenges and crises that are being caused by these environmentally toxic places. We now know from a Princeton study that Superfund sites are causing significantly higher rates of birth defects. As our science is getting better, we now know that there’s no excusing the lack of moral urgency to do something about this environmental crisis. We see Flint, Michigan, for example, and the attention it’s gotten, but what most Americans don’t seem to realize is that this lead problem is not confined to just Flint. There are over 3,000 jurisdictions that have twice the lead levels in people’s blood than Flint does. And so we’re just now seeing more people being exposed to the truth about environmental injustice in our country and how it’s disproportionately affecting low-income communities and communities of color.

Q.One primary component of your bill is that it restores private citizen’s right to sue for environmental justice relief. Explain why that’s so important.

A.There is a tremendous amount of corporate villainy going on in our country, where corporations are doing things that they know are causing harm, and they wouldn’t do this where their children live or where their children are growing up. Communities often don’t have the tools necessary to fight back against grievous harms being caused them. So to give a cause of action for folks who can demonstrate the harm that’s being caused, it’s critically important that you allow people to have more tools with which to defend themselves and defend their communities.

Q.There was a private right to sue at one point. What do you think changed?

A.There has been a concerted erosion of people’s abilities to take legal action, and that’s what I find so unconscionable: In a country where there’s the idea of equal justice under the law, we’ve seen that perverted such that people can’t defend themselves in the courts. The courts have been traditionally the way that people found justice, whether it’s educational justice, in Brown vs. Board of Education, or whether it’s against discrimination in general. The courts have often been the great equalizer. But when you take away communities’ rights to take private action you really skew the scales of justice in favor of the powerful interests.

Q.Some people will say that we already have an environmental justice executive order, so why do we need a law?

A.We talked with grassroots environmental justice advocacy groups all across the country, and one of the biggest concerns that folks had was that with many of these executive orders, we are now seeing that with the stroke of a pen these executive orders can be taken back by a president. And unless we codify them legislatively, they’re always going to be vulnerable under a president who is influenced by moneyed powers, and who is not concerned about justice for disadvantaged, low-income, and minority communities.

Q.You’ve been going around the country touring environmental justice communities, and one of the places you visited was Africatown, near Mobile, Alabama. What did you learn there?

A.I was just moved by these grassroots communities who were meeting in churches and community centers, and how active and engaged they are, but also feeling like they’re up against titans and Goliaths. What we saw in these communities was shocking to the eye. You see how the cumulative effect of factories and industrial activities and waste dumps are disproportionately stacked against their communities. So, here you have this historic town, Africatown, a very important community that is now being poisoned by the cumulative impacts of industrial activities in their area and they’re trying to fight back because of the health challenges they are facing. These are families who owned this land going back generations. It was the way that wealth was passed on. Now their land is being stolen from them by these corporations that are driving down the value of their land by creating environmental conditions in which nobody will want to buy a home in that community.

Q.This bill likely will not speed through Congress. What can cities do in the meantime to ensure environmental justice protections?

A.We did a lot of things in Newark to try to take our environmental realities into our own hands. There are commonsense things like we were planting lots of trees, restoring some of the tree canopy from generations ago in Newark, and we know that trees help clean the air and have a lot of other benefits. We did a lot to try to stop the runoff from roads and paid attention to people who tried to permit pollution in urban communities as opposed to suburban communities. Newark was taking enough of the region’s environmental polluting entities—we had airports, the highways intersecting around Newark, incinerators, waste treatment plants all in the city. We understood that we needed to focus on the cumulative impact of all of these things and tried to stop more of these facilities from coming into our community. We had to fight really hard to get the federal government to prioritize the Superfund sites in Newark to be cleaned up.

So, in short, I would say you have to, number one, get more aware of the environmental crisis that might exist in your city. You need to get a comprehensive strategy to deal with it. You have to be willing to fight powerful entities to get them to be more responsible. But cities have to be aware of this because there are too many children in America, in urban places that are growing up sick as a result of years of environmental malfeasance.

Q.Trump and Pruitt do not share your concerns about environmental protection. Are you concerned that they would undermine any authority this bill carries should it pass?

A.I’m more than concerned. One thing I tried to show in my travels so far is that this is not just an urban issue. It’s also a rural issue. And whether it’s pesticides put on crops affecting farmworkers, or mine runoff, or how they dispose of their toxic materials, we are living in a nation where more and more, we need a vigilant federal government to protect people. But the EPA is now controlled by people who are more in line with industry’s desires than they are with protecting families and communities from these toxins. The environmental justice issues in this country are not going to get better, they will get far worse under a president like this who has shown no desire to hold corporations and powerful interests in our country accountable.