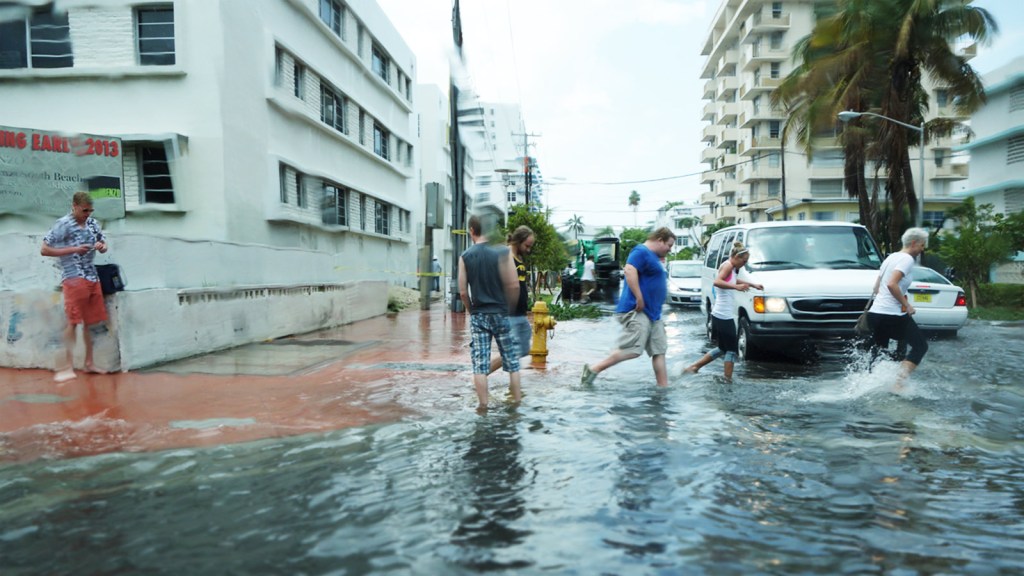 Elizabeth Kolbert wrote about visiting Miami Beach in a recent issue of The New Yorker. What she saw there was frightening: city streets that regularly flood with the high tide, with residents marooned on stoops and porches watching their trash cans bob in the street. “For the past several years,” Kolbert wrote, “the daily high-water mark in the Miami area has been racing up at the rate of almost an inch a year, nearly ten times the rate of average global sea-level rise …. Talking about climate change in the Everglades this past Earth Day, President Obama said, ‘Nowhere is it going to have a bigger impact than here in South Florida.'”

South Florida, unfortunately, is also saddled with a state government that is unwilling to address climate change. Tristram Korten from the Florida Center for Investigative Reporting (FCIR) looked at how the state’s leaders have dealt with this monster in their midst, and it’s an excellent — though terrifying — example of how bad leadership in the face of climate change can damage both the land and the people: Today, Florida is well-known for its ineffectual approach to climate change and sea level rise, but things could have gone much differently. Korten writes that in 2005, then-state attorney general and gubernatorial candidate Charlie Crist sat down with presidential candidate John McCain, who told him that he needed to start paying attention to climate change, that it was a big deal:

That brief conversation in Miami would result in Florida becoming, however briefly, a pioneer in grappling with the effects of climate change — such as flooding and freshwater drinking supplies contaminated with saltwater. After Crist was elected governor, he convened a summit, appointed a task force and helped usher in new laws intended to address a future of climate change and rising sea levels. Crist and the Florida Legislature set goals to reduce emissions back to 1990 levels.

The effort didn’t last, and in a short amount of time, the U.S. state with the most to lose from a warming planet became a global laughingstock and a symbol of the polarized debate surrounding climate change.

After just one term as governor, Crist ran for senate as an independent in 2011, and lost to Mark Rubio, who is currently seeking the GOP nomination for president. Republican businessman and Tea Party favorite Rick Scott replaced Crist as governor, and the Florida climate policies passed under Crist were quickly rolled back. “In 2011,” writes Korten, “Sen. Alan Hays, a Republican from Umatilla, sponsored legislation to repeal the cap-and-trade program in the law. A Climate Change Commission charged with implementing the new laws was disbanded and its powers transferred to the Department of Agriculture, where it is now called the Office of Energy.”

Perhaps most notoriously, Scott actually banned officials from discussing climate change after taking office, and when the FCIR analyzed the Office of Energy’s website, it found that “in 2010, the year before Scott was inaugurated, there were 209 references to climate change in documents on the website. By March of this year, there were zero new references.”

With no state leadership on climate change, local governments have had to take action. Four South Florida counties — Broward, Miami-Dade, Monroe, and Palm Beach — came together in 2010 to form the bipartisan Southeast Florida Regional Climate Change Compact to “coordinate mitigation and adaptation activities across county lines,” according to their website. Practically, the group works on sea-level projections, protecting public infrastructure, setting goals for community-wide greenhouse gas reduction, and monitoring other threats from climate change like increased disease, drought, and flooding, writes Korten. The four-county partnership is one of seven regional climate change organizations in the U.S., and “Florida is in many respects the most advanced, most well known and admired,” Steve Adams of the Institute for Sustainable Communities told the FCIR.

But it’s not enough. Without state, national, and global action on climate change, Florida will continue to disappear. And with Scott and Rubio in office, action seems unlikely. “When the governor of the state is a full-out climate denier, the irony is just excruciatingly painful,” Al Gore told Kolbert. And it’s the people of Florida — to say nothing of the species they share the land with — who will pay the price.