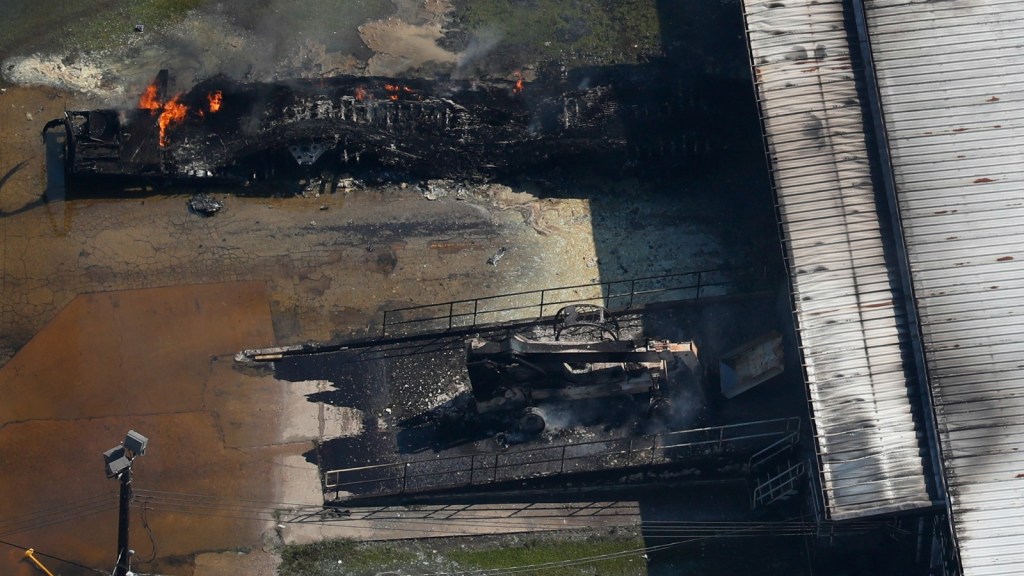 The owner of a flooded-out chemical plant in Crosby, Texas, said early Thursday it received reports of explosions at the plant.

Arkema Inc. said the Harris County Emergency Operations Center notified the company at 2 a.m. Thursday of explosions and black smoke coming from its Crosby plant, which was inundated by Hurricane Harvey’s floodwaters.

But the Harris County sheriff Thursday morning described the incident as a chemical reaction, not an explosion.

The development comes a day after Arkema, whose chemicals are used in making plastics, warned that the organic peroxides used in the site’s manufacturing process had begun to heat up after the plant lost its primary source of power and backup power from generators. Without electricity to power refrigeration, the chemicals — stored in 18-wheeler box vans throughout the plant — were expected to degrade, possibly leading to some type of explosion or fire.

The plant has nine vans, each with 36,000 pounds of organic peroxide stored in cardboard containers. Containers in one of the vans popped and caught fire, producing smoke that wafted 30 to 40 feet into the air, local officials told reporters early Thursday.

Arkema expects each of the vans will eventually ignite as they lose power and refrigeration.

“Please do not return to the area within the evacuation zone until local emergency response authorities announce it is safe to do so,” the company’s statement said.

Assistant Chief Bob Royall, with the Harris County Fire Marshal, told reporters the chemicals inside each van that loses refrigeration “will burn with intensity until the fuel is consumed, and then they will die down again.”

The byproduct of the fires would be typical “black smoke with carbon particles in it,” Royall said.

His office and the Harris County Sheriff’s Office downplayed environmental and public health risks from the plant, going as far as suggesting that “explosion” was not the proper terminology for the chemical reactions in the vans.

“They were different organic peroxides of different grades that were released, and it created a pop in the containers where they were being stored,” Sheriff Ed Gonzalez told reporters. “It wasn’t an explosion, I want to be very clear.”

“We just don’t believe there’s any further threat, even to the broader community. Even if somebody stayed behind in the active zone,” Gonzalez added. “We just want to manage the narrative a little bit, to make sure people don’t get in a panic if there doesn’t have to be.”

At a press conference in Washington, D.C., Federal Emergency Management Agency Administrator Brock Long called the plume wafting from the plant “incredibly dangerous.” But the U.S. Environmental Protection Agency said in a news release Thursday that “there are no concentrations of concern for toxic materials reported at this time.” The agency said it was reviewing data from an aircraft that surveyed the scene shortly after the explosions.

“We will consider using any authority we have to further address the situation to protect human health and the environment,” EPA Administrator Scott Pruitt said.

The county has been consulting with Arkema and outside experts since early Tuesday about how best to handle the chemical reactions.

“We’ve developed what we consider a very safe plan,” said Royall, the Harris County fire marshal. “Everything is going exactly as we expected.”

“If you want to call it an explosion, there’s a technical definition, and I’m not going to get into that,” he told reporters.

Fifteen sheriff’s deputies at the scene were taken to the hospital Thursday morning after reporting that smoke had irritated their eyes and throats. All have been released, the sheriff’s office tweeted at 9:20 a.m.

While the company has downplayed the potential impacts of the explosion — Arkema CEO Rich Rowe said Wednesday that any sustained environmental impact would be “minimal” — environmental experts expressed concern about fallout from the explosion.

Carman said the smoke indicates the presence of polycyclic aromatic hydrocarbons, a known carcinogen. Depending on the wind, these chemicals could spread quickly to the surrounding area, he said.

Still, it’s difficult to predict the exact impact of the fumes given the minimal information that Arkema has released, according to Bakeyah Nelson, executive director of Air Alliance Houston. In a conference call with reporters Wednesday, Rowe refused to release the company’s federally mandated risk management plan or the plant’s chemical inventory.

“Without that information, it’s difficult to really assess the situation,” Nelson said. “Them releasing that to the community is really the key to being able to understand.”

The Texas Commission on Environmental Quality said it was among several local, state, and federal agencies monitoring the plant.

“Of immediate concern for residents around the plant is smoke,” the agency said in a press release Thursday. “The smoke from the fire is especially acrid and irritating. Those with heart problems or respiratory conditions, such as asthma or emphysema, may be particularly sensitive.”

The Texas Tribune is a nonprofit, nonpartisan media organization that informs Texans — and engages with them — about public policy, politics, government, and statewide issues.