Florence is the worst flood in East Coast history. Here’s how locals describe it. 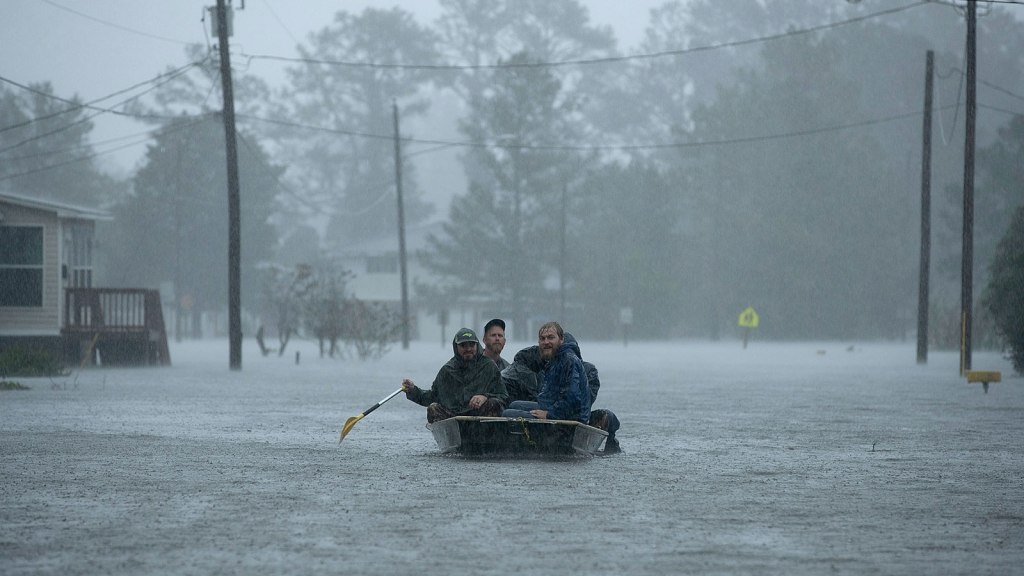 Florence is the worst flood in East Coast history. Here’s how locals describe it.

Many of the dire predictions came true. In the past few days, Hurricane Florence has become the worst rainstorm in history for North Carolina, as well as the entire East Coast.

The images streaming in from the thousands of square miles of flooded cities and farmlands across the Carolinas are heartbreaking. From the washed-out beach homes of the Outer Banks to the raging mountain streams in the foothills of the Appalachians, nearly the entire region is underwater. All that rain means dozens of lives have been lost, and hundreds of thousands have been displaced.

Florence’s rainfall data is astonishing. The four-day accumulation of nearly 36 inches, which was measured in Elizabethtown, North Carolina, is far, far above the previous rain record for a hurricane anywhere on the East Coast. It broke the North Carolina record by nearly a foot. That much rain is more than what scientists estimate a 1,000-year level, 60-day rainstorm would drop in the region, given a stable climate: slightly more than 35 inches. Put another way, there’s a 0.1 percent chance every year that in a 60-day period the rainfall in Elizabethtown would be at least 35 inches. North Carolina took on all of that water in just four days.

And as ocean waters warm and the atmosphere changes, it’s becoming increasingly clear that this storm is not just a fluke; there are more Florences in our future.

The region the storm hit hardest is one of the poorest parts of the state, where virtually no one has flood insurance. As bad as it is, the waters in rivers and streams statewide are still rising.

Grist corresponded with 10 Carolinians who grappled with Florence. Here are their stories, edited and condensed for clarity:

There are two types of people here: The ones who panic and empty the grocery shelves, and the ones who don’t trust “the news”, and don’t prepare at all. It could have been a lot worse here, but that kind of split between people has been interesting to watch. Even the weather is dividing people now.

There were people who would not take the warnings seriously enough. Knowing you gotta leave people behind is an odd feeling.

We’re not allowed to talk to media. It’s against company policy. Many wanted to evacuate, but we deliver fuel. Management pushes gasoline drivers to fill gas stations. Roads are being washed over, sink holes created, towns flooded, but corporate wants the stations pumping.

I stayed. Where I was, near the landfall, was heavy rain and flooding. The highways were loaded with people trying to evacuate. Plus the gas stations were all full; the one in front of my house closed down early. The day before the storm, there was so much, I thought, “I might as well stay.” So, you just stay and hope for best. The flooding didn’t make it to my house directly, but the streets were extremely wet.

It’s still raining so I’m conflicted on when I’ll be able to drive again. Power has been out for about two or three days. A lot of people around here are worried about their safety while trying to make it out to work in the days after the storm. I know some people that are hesitant about going back to work. I’m just hoping midway through the week it clears up. They aren’t firing anyone for not showing up this week, I know for sure.

The thing that stands out the most to me is just how fast the water level in the river rose. We went to bed (around midnight) and there was hardly any water in the culvert [a water conduit under a road]. When we woke up the next morning, water was halfway up the foundation. Tons of homes in our neighborhood were flooded, and they flooded so quickly that the Coast Guard had to come in and rescue two families.

Evacuating was absolutely the right decision for my family. I wish more people would have evacuated as well. But I can tell you, I was glued to the TV and my phone for three days during Hurricane Florence. Not being able to check on your house is one thing, but not knowing [about] your loved ones that decided to stay was another thing.

It’s just so sad to see all of these people’s homes being damaged, people losing their lives, but the support that all of eastern North Carolina has shown has been amazing. People that I don’t know have offered help and even offered up their home for us to stay.

I never envisioned that a storm could hit Wilmington this hard. You see it on TV, but you don’t really expect it to happen to you.

The night the storm came, out power went out at around 1, while I was watching TV, and I decided to go to bed. I slept very well (which I usually don’t).

In the morning I looked out the window, but it was all fogged up. I go downstairs and hear the dog whining, so I got her leash and start walking to the door that leads to garage. I pressed the button to open the garage but I forgot the power was out so I exited through the door that leads into the garage.

We haven’t had power for three days, and my mom was called into work today. She has to stay there overnight for a week

Our house is so hot. My grandmother came to stay with us because her running water went out. Today we had a crew of guys who came to cut down the fallen trees. Their bulldozer ended up damaging our water line, so our water went out. So we’re left with no water or power.

One small leak in my roof managed to drip four five-gallon buckets worth of water since yesterday evening. It was an absurd amount of rain.

The mood around town has seemed pretty relieved. Everyone was worried for another Hugo. But our town ended up actually sending supplies to a nearby town because we weren’t impacted nearly as bad as expected.

Not being able to communicate with my dad and brother scares the hell out of me. Seeing pictures of my home being torn apart by a storm breaks my heart. Nobody thinks this kind of thing happens to their home until it does. I go to UNC-Wilmington, we have no clue when we can go back or if they’ll suspend the semester.

It’s hard to keep in touch, just saying goodbye to my dad was pretty hard. I did everything I could to try and make him leave, he refused, that was very stressful for me, people don’t understand the real effect a hurricane has and how scary it actually is.

I’m from Wilmington, work as an EMT, and can’t get back because of the flooding. My brothers and sisters are exhausted waiting for backup, and I’m in Arkansas with my wife’s family.

I’m trying my best to get back home. I have multiple people looking for a route into town for me. There is an organization ([led by] a friend of an Army buddy) that has helped me, as well as another friend that is a pilot that has a ticket for me in Memphis going to Raleigh as soon as I can get there. When I know for a fact the roads are clear, I’m flying out and driving down to my city. My family are here and safe in Arkansas, and that’s my number one priority. So now it’s time to get back to my city and help in any way I can.

I arrived in Rutherfordton last week from Lakeport, California, after being evacuated from the Mendocino Complex [Fire] and watching my county burn. I served in the Emergency Operations Center for [this summer’s] Valley Fire, and I was done with fires.

My friends moved to North Carolina from Florida a few years earlier and [told] me to head East. After 10 days on the road, I arrived to hurricane prep. While Rutherfordton has so far only been minimally impacted, it does have me wondering if I made the right decision — or if there are any right decisions to make on where to live anymore.