Long before an aspen tree fell on a power line in New Mexico’s Jemez Mountains in June 2011, triggering the biggest wildfire in the state’s history, fire managers knew that New Mexico’s forests were vulnerable. Climate change-induced drought and higher temperatures had dried out the trees and soil. And after more than a century of fire suppression, areas that supported 40 trees per acre in the pre-European era now were blanketed with up to a hundred times as many. This profusion of trees — as many as one per square yard — weakened all of them, and rendered them defenseless against megafires.

Even so, the fire managers weren’t prepared for the astonishing power of the 2011 conflagration, known as the Las Conchas Fire. During its first 14 hours, it sent walls of flame hundreds of feet high as it consumed nearly an acre of forest per second and threatened the city of Los Alamos. By the time it was extinguished five weeks later, it had burned an area nearly three times as big as the state’s largest fire before it, and left behind nearly 100 square miles so severely burned that even seeds to regenerate the forest were destroyed.

But the fire’s full impact didn’t register until nearly two months later, when a thunderstorm in the Jemez Mountains washed tons of ash and debris into the Rio Grande River, the water source for half of New Mexico’s population and for a major agricultural area. Only an inch of rain fell, but the debris flows the storm generated turned the river black and dumped ash, sediment, and tree and shrub remnants into a major reservoir⁠, requiring a costly cleanup.

To ward off damage to equipment, water treatment plants in Albuquerque and Santa Fe closed for 40 days and 20 days respectively while they drew down precious stores of groundwater. Farmers found that the polluted water clogged the nozzles of their drip irrigation systems, rendering them useless. Even worse, the most severely burned portions of the watershed continued discharging debris and sediment into water channels long afterward; a heavy rainstorm two years later generated enough sediment to entirely plug the Rio Grande. 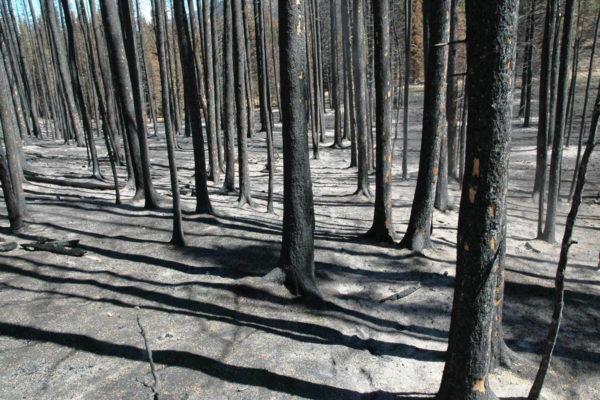 What has unfolded in New Mexico is far from unique. In the last two decades, megafires in similarly dry and overgrown watersheds have ended up contaminating downstream water supplies in numerous areas throughout the western United States, including Phoenix; Denver; Flagstaff, Arizona; and Fort Collins, Colorado. Downstream water managers serving millions of urban residents have learned that the security of their water supplies is tied to the health of upland watersheds that may be hundreds of miles away.

“There’s been a real change in consciousness among urban water providers and water utilities,” said Gregg Garfin, director of the University of Arizona’s Southwest Climate Adaptation Science Center. “They’ve come to realize that management of watersheds and fire ecology issues is just as important as the direct impacts of drought on water availability.”

This development is part of a broader nationwide shift in forest management over the last generation, as degraded forests in watersheds and the resulting rise of megafires and pest infestation have helped generate a shift away from focusing on forests chiefly as sources of commercial timber and instead toward “ecosystem-based management,” in which forests’ natural processes are reinforced to reap benefits like clean water. Indeed, in some areas forest restoration has been shown to increase the amount of water flowing into reservoirs. The shift toward ecosystem management has occurred even in such regions as the U.S. Northeast and Mid-Atlantic states, where wildfires are uncommon, but where other watershed menaces, including development and toxic agricultural runoff, have led to contamination of downstream water bodies such as the Chesapeake Bay, Delaware Bay, and the Hudson River.

In the western U.S., watershed restoration chiefly consists of two steps: thinning of trees and shrubs, and prescribed burns. In the eastern U.S., it involves a bigger set of tools, including planting native trees, reducing the area of impervious surfaces, and slowing the speed of stormwater so that more water percolates into soil and aquifers. All these measures are designed to improve water quality.

Both the U.S. Congress and the U.S. Forest Service have supported the shift, providing programs and funding for watershed restoration in much of the nation. But forest restoration is expensive: It costs anywhere from $600 ⁠to $1,500 per acre, depending on the degree of steepness of the terrain (sometimes helicopters are required to remove logs in mountainous areas) and the harvested logs’ commercial value (usually low to zero). Budget constraints exacerbated by the soaring cost of fighting rapidly proliferating wildfires have meant that government agencies can fund restoration of only a tiny fraction of the nation’s roughly 150 million acres of forest that need it. The result is that while numerous pilot projects have shown the efficacy of restoration, agencies rarely have enough money to treat entire watersheds. 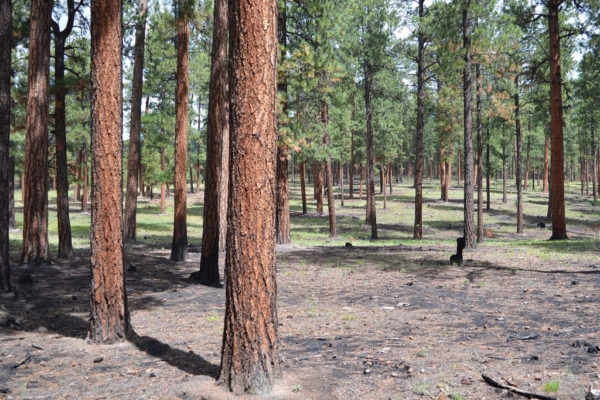 Today, 108,000 acres of burned forest in central and northern New Mexico have been restored through strategic thinning and prescribed burns.

Faced with this dilemma after the Las Conchas fire, residents in the Rio Grande watershed pioneered a path forward. Guided by The Nature Conservancy, the most active U.S. environmental organization in watershed restoration, in 2014 they launched a public-private partnership, the Rio Grande Water Fund, whose 73 contributing members⁠ include government agencies at all levels, foundations and other NGOs, local water utilities, and local businesses and residents. Together they raised enough money for a 20-year program to restore 600,000 forest acres — enough to support the resilience of the entire central and northern New Mexico portion of the Rio Grande watershed. They have already restored 108,000 acres, and are racing to complete the job before another megafire occurs.

The Rio Grande Water Fund’s public-private partnership model has become official federal policy. Last August, the U.S. Forest Service published a landmark report called “Toward Shared Stewardship Across Landscapes” that outlined the agency’s intention to convene watershed stakeholders of all kinds to plan and fund watershed restoration. “Because fire crosses back and forth across land ownership boundaries, the risk is shared,” the report said. “Accordingly, land managers cannot achieve the fire-related outcomes people want … without shared stewardship of the wildland fire environment.”

The benefits of watershed restoration extend far beyond water security. Most obviously, healthy forests deter megafires. Laura McCarthy, the Rio Grande Water Fund’s executive director, says that in three instances since restoration work began in New Mexico, wildfires that ran up against restored zones immediately died down. Healthy forests can tolerate low-intensity fires: They possess diverse understories of grasses, sedges, and forbs, and rich, microbe-laden soil, all of which supports wildlife, from insects to mammals. Watershed restoration can double the amount of carbon stored in the soil, which means that it’s a vital tool in fighting climate change. And watershed restoration creates jobs: In the case of the Rio Grande Water Fund, many of those jobs go to youths in traditional Hispanic and Native American communities where unemployment rates are 30 percent or higher.

In some regions, forest restoration even increases water supplies. Roger Bales, a hydrologist at the University of California, Merced, has shown that because watershed restoration requires the removal of vast numbers of young trees, loss of water into the atmosphere through evapotranspiration in those trees is eliminated. The water instead flows downward, into the soil, often on its way to the watershed’s rivers and reservoirs. Bales’ experiments in California’s Sierra Nevada show that restoration can increase water supplies in downstream reservoirs by 9 to 16 percent. That makes restoration a more cost effective (and vastly less destructive) water supply method in California than building dams. Restoration is also cheaper than fighting the megafires that are otherwise inevitable in the overgrown forests: Last year’s Camp Fire in Northern California alone caused $11 billion to $13 billion in damage.

Thinning of trees and shrubs is a labor-intensive (and, therefore, job-creating) process that may result in the removal of half or more of a degraded forest’s biomass in an effort to return the area to something like its pre-European ratio of trees to acreage. But unless it is followed by prescribed burns, undesirable trees and shrubs grow back. In that case, said Don Falk, a leading fire researcher at the University of Arizona, “You’re either committed to a perpetual Sisyphean cycle of thinning,” every 10 or 15 years, “or you’ve got to let fire back into the system.” Fire is an integral part of the functioning of many ecosystems: Blazes of less-than-megafire scale germinate seeds, keep native species in balance while warding off invasive species, and stimulate microbial activity that produces soil nutrients.

Prescribed burns are designed to do the job that naturally ignited fires once did, but they face certain obstacles. The seasonal window of opportunity for controlled burns is limited to a few months of the year, and conditions must be just right: high humidity, dry but not desiccated fuels, and some wind to disperse smoke high into the atmosphere, but not enough to risk losing control of the fire. 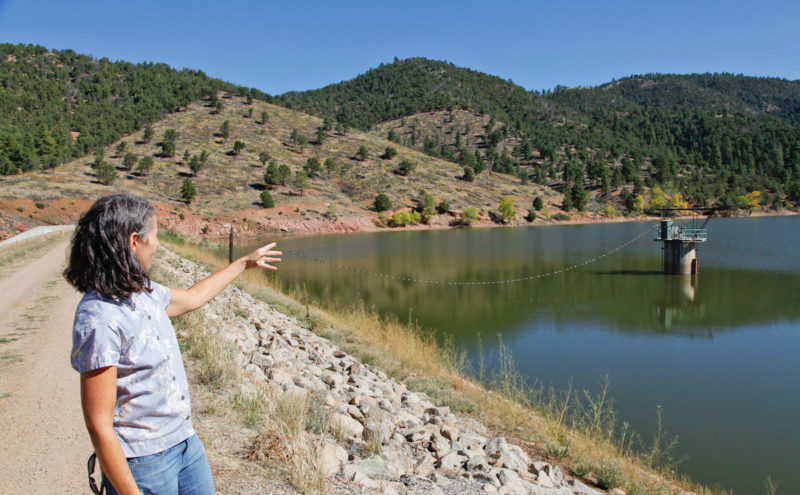 Laura McCarthy of the Rio Grande Water Fund points to a hillside near a Santa Fe, New Mexico reservoir where forest density has been reduced to fire-safe levels.

And even if conditions are perfect, firefighters trained in prescribed burn techniques may not be available. That’s because the lengthening of the fire season due to climate change has forced firefighters to spend more time away from home, trying to extinguish megafires throughout the West. To solve this problem, the Rio Grande Water Fund created a mobile team of prescribed-burn professionals who stay in the Rio Grande watershed.

When an unplanned fire occurs, fire managers must decide quickly whether an outbreak is modestly sized and unthreatening, in which case it should be allowed to burn as part of the desired reintroduction of fire into the watershed, or whether it’s a budding megafire, which must quickly be suppressed. A fire manager who lets a fire burn can face lawsuits or job loss if it goes out of control; for this reason, managers typically err on the side of fire suppression, sometimes setting back the cause of restoration.

As climate change intensifies, degraded watersheds will become more and more vulnerable to megafires, likely setting in motion a disastrous positive feedback loop: Megafires substantially increase greenhouse gas emissions, which heat the atmosphere and spawn more megafires. For this reason alone, watershed restoration is as urgent as any other kind of climate change remediation. Falk, the University of Arizona fire researcher, estimates that to have a chance of breaking this cycle, the area of watershed being restored in the U.S. must quickly increase by at least 10 times.

“Just as it’s imperative for us to begin addressing the underlying drivers of climate change at a much higher pace than we’ve been doing until now, in the same way we have to accelerate the work of restoring ecosystems,” he said. “These aren’t decisions we can sit around and ponder in an armchair for decades. We have to start acting now.”