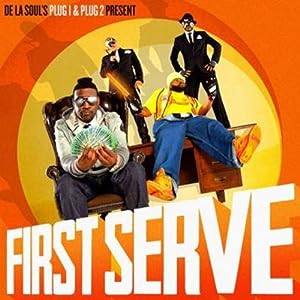 The first hip-hop album I ever got into was Low End Theory by Tribe Called Quest, back in 1992, when I was a sophomore in college. (Yes, that’s rather late to discover rap, but what can I say? I was raised in Middle Tennessee. Diverse it was not.) That was a damn good place to start — it’s one of the best rap albums of all time and still my favorite.

That got me into a bunch of similar groups like the Jungle Brothers and De La Soul. I don’t know if any of the subsequent versions — Jurassic 5, Arrested Development, Digable Planets, early Black Eyed Peas — ever reached De La levels of quality, but I enjoyed them.

(Yes, I am fully aware that all this stuff falls squarely under the rubric of Rap White People Like. Guilty as charged, I guess. I’m too old to be trying to establish street cred.)

There used to be a lot of that kind of hip-hop — bouncy, catchy, generally upbeat and positive. My question: what happened to it? Where’d it go? Hip-hop these days seems to be either vapid or “hard.” I have great respect for the latter, but it’s not really my cup of tea. You’d think someone would be carrying the Tribe/De La torch. Surely there’s still an audience for it.

But if there’s anything like that out there right now, I don’t know of it. I’ve asked this question of people many times and had many groups suggested to me, but none really fit the bill.

Anyway! Until I find something better, I’ll have to be satisfied with First Serve, a side project of Dave and Posdnous of De La Soul. It’s a concept album of sorts. On it, they play two young rappers breaking into the industry for the first time. The story part is meh, and Jesus do I hate “interludes,” but the music, even if it falls short of the De La glory days, is fun. Here’s a boppy little song called “Must B the Music.”