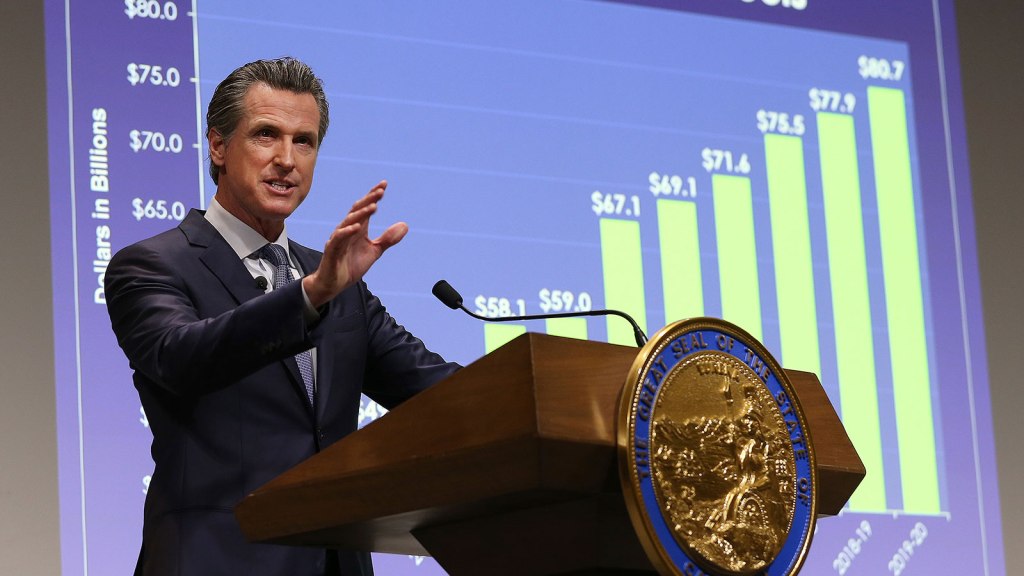 California’s new governor started his term with gusto this month, presenting a set of policy proposals that should improve the state’s chances of hitting its ambitious climate targets. Governor Gavin Newsom’s ideas for squelching out tailpipe emissions and absorbing carbon in farmlands has observers feeling a little more hopeful that California can zero out its greenhouse gas emissions by 2045 as ordered by the previous governor, Jerry Brown.

At one of his first press conferences as governor last week, Newsom seemed to revel in the wonky details as he laid out his proposed $209 billion budget. He strode back and forth in front of reporters, talking into a lapel mic and flicking up images of pie charts and bar graphs on a screen behind him for nearly two hours.

“I, unlike the previous administration, may spend a little bit more time on this than you want. Just warning you. Full disclosure. This is something I really enjoy,” Newsom said.

One of those wonky details about housing and transportation could make a big difference in the state’s climate efforts, said Ethan Elkind, a professor of environmental law at the University of California, Berkeley. Because cars and trucks are the biggest source of carbon emissions in the state, “the big challenge in California is reducing the amount of driving people have to do,” Elkind said. “That’s a direct function of where we build houses in relation to jobs and transit.”

But instead of building more houses in cities, near offices and public transit, various laws and incentives in California have encouraged real-estate developers to build houses in farmland and forests. For years, governors have told city governments they need to allow more housing, but these exhortations haven’t gone much beyond finger wagging.

Newsom, on the other hand, is backing up his words with a threat that mayors can’t ignore. The state funnels billions of gas-tax dollars to local governments so they can pave roads and pay bus drivers. Newsom wants to cut off that cash to the cities that thwart the construction of new apartments near office towers and train stations.

“If you don’t reach those goals we’re going to take [gas tax] money away from you,” Newsom warned. “To me, transportation is housing, housing is transportation. You’re not hitting the goals? I don’t know why you get the money.”

That shows some real backbone, Elkind said. “For the first time we’re seeing a governor being serious about withholding money from cities that aren’t meeting their housing obligations,” he said.

Newsom made another noteworthy divergence from previous climate policy on agriculture. California has been experimenting with techniques to get farmland to soak up carbon from the air; it’s called the Healthy Soils Initiative, which we wrote about here. That idea, Newsom said, is a “passion of mine.” After starting the program in 2017, the legislature cut funding, but Newsom wants to restore it.

“It’s the first well-funded healthy soils program, and now Newsom wants to put more money toward that than ever,”said Renata Brillinger, executive director of the nonprofit California Climate and Action Network. “So that’s moving in the right direction,”

Newsom wants to put $18 million a year into these soil conservation practices, enough to spread them across 500,000 acres by 2030. If these techniques work and the absorbed carbon remains in the ground (big “ifs” since the science is new) that would pull 5.3 million tons of carbon out of the air, Newsom said

While Brillanger applauded the funding for the Healthy Soils Initiative in Newsom’s budget, she lamented the lack of dedicated money for water conservation on farms,and for cutting methane emissions from manure.

Newsom’s big plans are just proposals at this point. He’ll need the help of the California legislature to make them a reality. A governor’s interests tend to drive legislative priorities, and experts seem to think this particular governor’s proposals could buttress California’s position as a climate leader.