Glacier National Park is on fire -- and yes, warming is making things worse 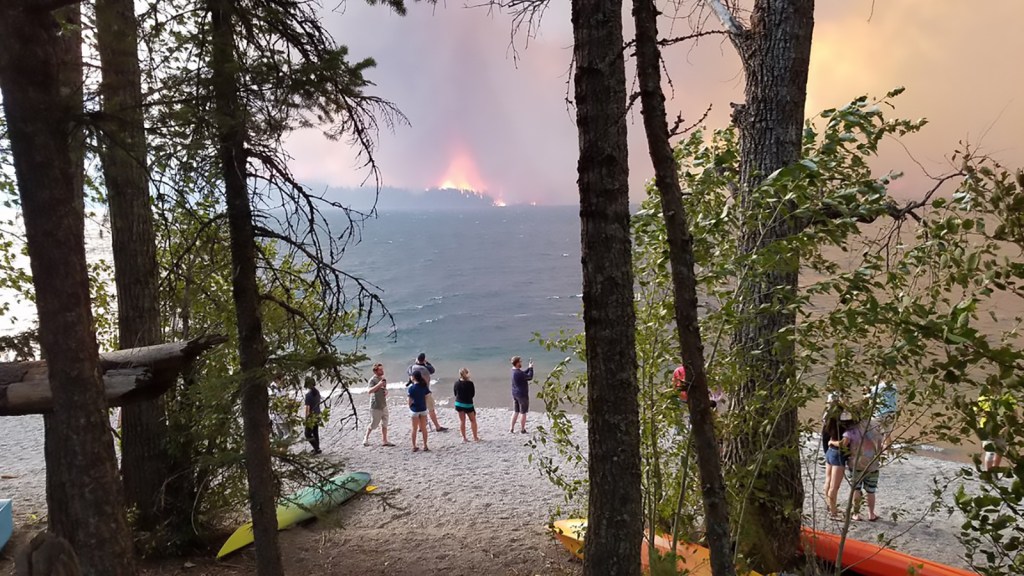 Glacier National Park is on fire — and yes, warming is making things worse

This summer has felt like a global warming turning point.

Now, another milestone: Saturday was the hottest day in the history of Glacier National Park, and its first recorded time reaching 100 degrees F.

On the same day, lightning started three fires in the Montana park, which has since been partly evacuated and closed.

On Sunday, hot and dry winds helped the biggest fire expand rapidly. Authorities have taken extreme measures, including deploying smokejumpers and dispatching firefighters by foot to reach the parts of the fire in rough terrain. So far, according to the National Park Service, these efforts have not been effective to slow the fire’s spread.

Howe Ridge Fire this evening about 11:30pm from the beach at Apgar. Check the park website for current road and trail closures associated with the fire. https://t.co/bTuF8eR6PA pic.twitter.com/yfAvt1Is6r

Right now, every state west of the Mississippi is at least partly in drought, including Montana. Missoula, the closest major city to Glacier National Park, hasn’t had any measurable rain for 40 days, and none is in the short-term forecast either — a streak that will likely wind up being the driest stretch in local recorded history, beating a mark set just last year.

It’s clear that Montana is already becoming a vastly different place. In recent decades, warmer winters have helped mountain pine beetles thrive, turning mountains red with dead pines. In 1850, there were 150 glaciers in the area now known as Glacier National Park. Today there are 26. They’ve been there for 7,000 years — but in just a few decades, the glaciers of Glacier National Park will almost surely be gone. By then the park will need a new name. Glacier Memorial Park doesn’t have the same ring to it.

As bad as climate change already is in Montana and throughout the West, the prognosis for the future is much worse. Compared to 1950, Montana has had 11 more 90 degree-plus days each summer. Without rapid emissions reductions, by 2100, there could be an additional 58 more in Northern Montana [pg. 50]. Eastern Montana could have as many as 70 more — about the same as present-day New Orleans.

Fire is a normal part of life in Montana, but all this abnormally hot weather is drying out the state’s forests and turning places like Glacier National Park into a tinderbox. Worldwide, forests are dying at an unprecedented rate thanks to climate change and pressure from agricultural and urban expansion. The same is true in Montana, where rising temperatures and more severe drought has already led to longer and more severe wildfire seasons.

After a tour of wildfire-ravaged California on Sunday, Montana-born Ryan Zinke, President Trump’s Secretary of the Interior, proposed a more controversial cause: The reason there are too many fires is because there are too many trees.

“It doesn’t matter whether you believe or don’t believe in climate change. What is important is we manage our forests,” Zinke said, adding a shot against environmental groups that have curtailed logging on public lands. While forest management is important, Zinke’s comments made some worry that the Trump administration was hoping to use fires as an excuse to open more public lands for logging.

The current best-practice for reducing fire risk is cutting down smaller trees and underbrush, but that’s expensive and time-consuming — the kind of work that logging companies aren’t interested in. Even that approach, however, can reduce forests’ ability to adapt to climate change. There’s no easy answer.

And yes, Zinke, it does matter if you believe in climate change. The only thing that will save forests and glaciers as we know them is ending our dependence on fossil fuels as quickly as possible. But we’re at the point where we know irreversible change is already locked in. That’s a scary reality, but instead of driving us to despair, it should motivate us to strive to save what we still can.