Gov. Jay Inslee on climate solutions in the Pacific Northwest 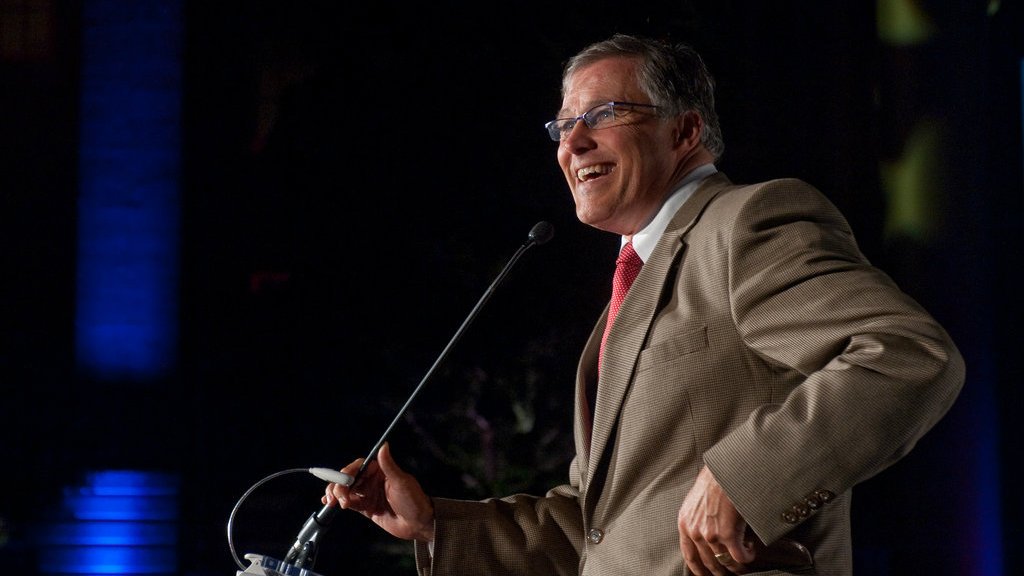 Gov. Jay Inslee on climate solutions in the Pacific Northwest

Let’s say you’re tired of climate inaction. Let’s say you want to see somewhere in the United States that is actually, you know, doing things.

If so, then your focus probably ought to be on the states of the Pacific Coast. Recently Washington state, Oregon, California, and the Canadian province of British Columbia reached an agreement to harmonize their climate and energy policies, a development that has the potential to not just accelerate greenhouse gas reductions, but also to catalyze a strong, clean, and resilient economy. That’s a big deal for a region that is home to 53 million people, and whose GDP is $2.8 trillion.

But there are challenges as well: While California and British Columbia have set a price on carbon (through a cap-and-trade program and a carbon tax, respectively), thus far Oregon and Washington have not. Meanwhile, a new battle is brewing over coal exports, one that potentially pits the Obama administration itself against the states of Oregon and Washington.

To discuss the climate outlook for the region, please join Washington Gov. Jay Inslee and other distinguished speakers and panelists for a special installment of Climate Desk Live — a partnership between the University of Washington’s College of the Environment, Climate Access, and Climate Desk, sponsored by Bloomberg BNA. Hosted by award-winning journalist Chris Mooney, the discussion will cover a range of key climate policy issues from coal terminals, to fuel efficiency standards, to carbon pricing, with an eye toward innovation and new energy solutions. The event will follow a March 27 Climate Desk Live panel in Vancouver, which will focus on the lessons learned from the first five years of British Columbia’s carbon tax.

The Seattle event will be Tuesday, April 1, from 3 p.m. to 5 p.m. Pacific Time, at the University of Washington Tower Auditorium, 4333 Brooklyn Ave NE, Seattle, Wash., 98105. Advanced registration for this event is required. You can RSVP here, and join the event on Facebook here (but you will still need to RSVP). The event will be live-streamed at climatedesk.org.

Jay Inslee, a fifth-generation Washingtonian, was first elected to Congress in 1998, serving until 2012. He is the coauthor of Apollo’s Fire: Igniting America’s Clean-Energy Economy, a book about the job-creating potential of the clean tech industry. As governor, Inslee’s top priority is growing Washington’s innovative industries such as clean energy, IT and life sciences, and strengthening existing industries such as aerospace, agriculture, maritime, and military.

Lisa Graumlich is the inaugural dean of the College of the Environment at the University of Washington, and the Prentice and Virginia Bloedel Professor. As a scholar, Graumlich pioneered the use of tree-ring data to understand long-term trends in climate, focusing on the mountains of western North America. She is actively engaged with a broad range of stakeholders to understand and respond to the impacts of climate change.

David Roberts is the senior staff writer at Grist, where he covers energy and energy politics. He has contributed to outlets including The New York Times, Outside, and Scientific American, and been featured on programs including MSNBC’s Up with Chris Hayes and The Rachel Maddow Show. His work has been hailed by thought leaders including Al Gore, Paul Krugman, and Michael Levi.

(Other speakers may be announced.)

Chris Mooney is an award-winning science and political journalist and the host of Climate Desk Live. He is the author of four books and the co-host of Inquiring Minds, a weekly podcast exploring where politics, society, and science collide.

Climate Access is a nonprofit network aimed at leveraging the public’s role in addressing climate disruption by increasing support for policy and involvement in shifting energy and sustainability behaviors. Climate Access consists of more than 2,000 leaders from nonprofits, government, and academia located in Canada, the United States, and 43 countries around the world. @climateaccess

Climate Desk is a journalistic collaboration between The Atlantic, the Center for Investigative Reporting, Grist, the Guardian, The Huffington Post, Mother Jones, Slate, and Wired aimed at exploring the consequences of a changing climate. It has a collective reach of more than 200 million people. @ClimateDesk

Bloomberg BNA, a wholly owned subsidiary of Bloomberg, is a leading source of legal, regulatory, and business information for professionals. Bloomberg BNA has been delivering cutting-edge news and expert reference materials to EHS professionals for more than three decades, always with unstinting attention to detail and complete objectivity. Bloomberg BNA’s Energy and Climate Report continues this tradition, with specialized news and analysis on the legal requirements and policy developments surrounding climate change mitigation and adaptation, clean energy and energy efficiency, and corporate sustainability practices in the United States and abroad. @BBNAClimate

University of Washington College of the Environment is the largest environment-focused college in North America, with unparalleled depth and breadth in environmental systems: from the forests to the seas and from the depths of the earth to the edges of the solar system. In partnership with industry, government and nonprofits, the College is creating new leaders, advancing knowledge and forging sustainable solutions to the critical environmental challenges of our time. @UW_CoEnv