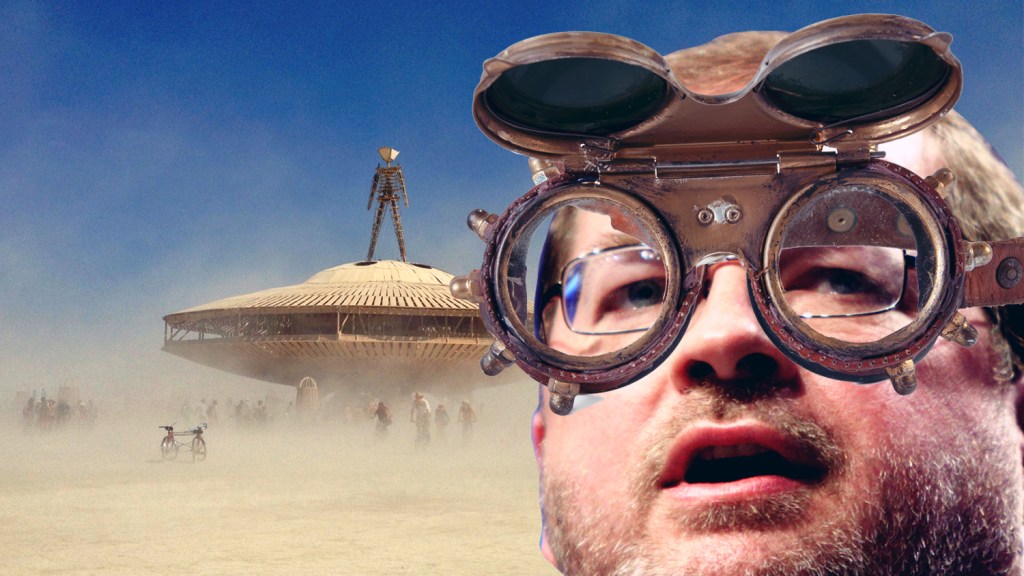 It’s hard to picture Grover Norquist in an art car.

Norquist, an archconservative, is a small-government crusader and founder of the influential lobbying group Americans for Tax Reform. A former advisor to George W. Bush and Newt Gingrich, Norquist is famous for once saying that he doesn’t want to abolish government, he just wants to make it small enough to drown in a bathtub. And though he loathes government, Norquist has been a D.C. insider for years: Peabody-winning journalist Steve Kroft said that he “has been responsible, more than anyone else, for rewriting the dogma of the Republican Party,” in no small part by convincing many of its members to pledge never to raise taxes. Norquist is a suit — and a pretty powerful one.

All this is to say, Norquist isn’t someone you’d expect to see at Burning Man.

And yet, Norquist told me in a phone call that he will descend upon Nevada’s Black Rock City this week, along with 70,000 bohemians pedaling tall bikes and hula-hooping around the desert for a week. There will be no shortage of sex, drugs, nudity, body paint, and desert gear of the sort, Norquist said, “you’d wear in Africa.” Burning Man is in a desert after all, with hot, dry winds whipping dust into open orifices, and nights cold enough to require fuzzy boots and furry jackets. In an essay on attending the festival with his 69-year-old father, writer Wells Tower described the scene as the “nearest simulation of hell” — although one doubts if hell would have as many naked San Franciscans on MDMA. Actually, maybe it would.

Burning Man is rebellious, nonconformist, de-commodified, clothing-optional, with little currency exchanged within the festival’s confines. The only things you can buy (besides tickets, which run from $390 to $1,200) are coffee and ice. For everything else, you provide for yourself or share with your neighbors. Burning Man just doesn’t seem very conservative. It’s a sexed-up art party, not a luncheon, and it’s hardly the place you’d expect to run into quintessential right-winger Grover Norquist. And yet, he says he feels welcome there.

Norquist first got involved to help out with a land dispute. Several years ago, Burning Man organizers were having trouble with the Bureau of Land Management, the agency that maintains the land where the festival takes place. The BLM “was screwing with them,” Norquist told Business Insider. “They were charging them $2 million; now it’s $5 million. Because all the BLM staff like to go and hang out and pretend they’re running it or protecting the ground or the desert or something.” Norquist says he helped the organizers with their BLM problem and met with Burning Man cofounder Larry Harvey while he was in D.C. Later, Harvey invited Norquist to attend the festival. He couldn’t at first — he wrote that “some idiot scheduled the Republican National Convention in Tampa for the same week” — but in 2013, he finally made it. And loved it. Norquist says Burning Man is one of the only things he’s seen that exceeded his expectations.

Part of the appeal is “radical self-reliance,” Norquist told me. Unlike, say, Woodstock, attendees must come prepared and everyone is responsible for him- or herself. And, of course, there’s no government telling people what they can and can’t do. “There are very few rules,” Norquist says. “Don’t stand in the roads or sleep in the roads. Otherwise, people mind their own business and do their own thing. And it’s 70,000 people doing very interesting, dramatically different things.” Norquist doesn’t participate in some of those things — there will be no drugs, nudity, or communal showers for him — but he takes part in other ways. Last year, he did stand-up comedy. The first year, he talked to the Psychedelic Drug Association about the politics of liberty and how to make the world freer.

And the way to make the world freer, according to Norquist, is capitalism. “Capitalism is another word for freedom,” he told me. And while he may be talking about the freedom to decorate your car like a dragon if you want to, he’s also talking about the freedom for corporations to operate without government oversight. Norquist’s organization, Americans for Tax Reform, opposes any increase in corporate taxes and regulations. The group has lobbied against subsidies for renewable energy, cap-and-trade legislation, and the Clean Power Plan, claiming — falsely — that it would “destroy the livelihoods of millions of hard-working Americans.” ATR is also funded by fossil fuel interests, including the American Petroleum Institute and several foundations connected to the Koch dynasty.

If this pro-corporate ethos seems contradictory to the Burning Man ethos, well, it is: Burning Man has refused corporate sponsorship and has made attempts at addressing its own environmental impact. “Our community respects the environment,” reads one of the 10 Principles of Burning Man. “We clean up after ourselves and endeavor, whenever possible, to leave such places in a better state than when we found them.” You could not say the same of ATR’s funders. But Norquist doesn’t care if he seems like an odd presence at Burning Man, or if others object to him being there. The left, as he points out, doesn’t have a monopoly on fun.

Besides, in some respects, Norquist isn’t your typical conservative. He’s married to a Palestinian Muslim, and he believes the U.S. needs vastly more immigration, not less. His big thing is capitalism, the free market, and as few taxes as possible, no matter the cost. Otherwise, he thinks the world should be run more like Burning Man. “Mind your own space, take care of yourself, and don’t poke anybody in the eye,” he says. “That’s my idea of how the world should work.”

With that, Norquist hung up — it was time for dinner, and he had young kids to feed — and I realized that I’d forgotten to ask his “playa name,” the nicknames Burning Man attendees adopt during the week. Traditionally, these names are given, not chosen, and I texted Norquist later to see what people would be calling him in Black Rock City. To my surprise, he texted back. “Grover,” he said. Just that.

So if you’re on the playa this year and you see a middle-aged man in desert goggles who looks like he’d be at home lobbying on K Street, it’s not an illusion, and it’s not the drugs either: It’s just Grover, one of 70,000 free spirits camped out in the American desert — a desert owned by the people and protected by the federal government — playing, together, for a week.