Henry David Thoreau would have given "12 Years a Slave" the Oscar for best picture, too 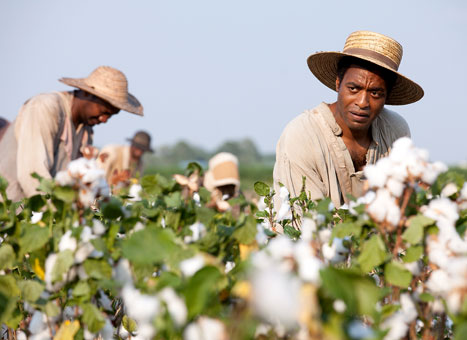 Henry David Thoreau would have given “12 Years a Slave” the Oscar for best picture, too

I’m glad to see that 12 Years a Slave won a few well-deserved Oscars Sunday night, including best picture and best adapted screenplay. Those who’ve been following me know that I used this film as one of the starting points for my blog, and as a lens for examining the intersection between environmentalism and social justice. I’ve been curious if there were others who saw in the movie the same crimes against nature I saw, along with the crimes against black people.

The film includes scenes of enslaved Africans hacking away at dense fields of sugarcane stalks, and chopping away trees in the plush forests of Louisiana, all at whip- and gunpoint, and all in efforts to expand the plantation state. This, to me, made it clear that director Steve McQueen was trying to show not only how slavery exploited and devastated African Americans, but also how it did the same to the American environment. He said as much when describing his cinematic vision: “The story is about the environment, and how individuals have to make sense of it, how we locate the self in events.”

McQueen drew his inspiration from the book on which the film was based: The memoir of Solomon Northup, an African American born free but sold into slavery. And as it turns out, there were many people during Northup’s time who were making the same observations about how slavery was wrecking the nation racially, physically, and biologically. Among them was Henry David Thoreau, the 19th-century naturalist and political philosopher.

I recently stumbled upon a research paper by James Finley, editor of the Thoreau Society Bulletin, titled “Justice in the Land,” published last year in the The Concord Saunterer: A Journal of Thoreau Studies. The piece explores Thoreau’s use of ecological protest to advance the anti-slavery cause.

Thoreau argued that slave labor and plantation-based agriculture was destroying the fertility and productivity of the South’s natural resources. But he also argued that the North was not spared in that equation, and provided an environmental justice lens through which to view that.

“Slavery and servility have produced no sweet-scented flower annually, to charm the senses of men, for they have no real life: they are merely a decaying and a death, offensive to all healthy nostrils,” he wrote in his essay, “Slavery in Massachusetts.” “We do not complain that they live, but that they do not get buried. Let the living bury them; even they are good for manure.”

And just so we know that he had a racial analysis about his environment — not just sweet-scented metaphors — he added that “the history of slavery and its aftermath reveals that at least some of our nation’s cherished green spaces began as black spaces,” a conclusion he arrived at after spending time in the Walden Woods of Massachusetts with Native Americans and marooned ex-slaves.

Thoreau made these observations in the 1840s-1850s, the same era when Northup was ensnared in an underground market that captured freed black men in the North and sold them down South as slaves. The practice was given legal cover by the Fugitive Slave Act, passed in 1850, that forced northern officials to remand slaves who escaped from Southern plantations back to their places of servitude. That law and the Kansas-Nebraska Act of 1854, which allowed slavery in the new western territories, were extending the pollutive effects of slavery both northward and westward — and Thoreau understood that.

Writes Finley, Thoreau “reveals how thoroughly Northerners … are embedded in slavery’s networks, suggesting that slavery is not simply a condition specific to the South but rather an environmental threat to the entire nation. He argues that the slave system pollutes everything, including agricultural land, wilderness, labor conditions, politics, and interpersonal relationships.”

In fact, the early environmental protection movement called the Free Soil Party coalesced with abolitionists to oppose slavery’s expansion. As white Northerners, many Free Soilers didn’t necessarily oppose slavery on the grounds that it was leading to massive oppression, torture, and killing of human beings, though. Rather, they fought slavery on the grounds that its expansion was a massive injustice imposed upon … well, the grounds. The concern was that more American soil, forests, and rivers would be destroyed by the metastasizing slavery problem.

“Some of these guys were white supremacists,” Finley told me on the phone. “They didn’t want slavery to extend into the new territories because they wanted that land free for white farmers.”

Whatever their motives, many Free Soilers banded with Thoreau to recruit more Northern whites to the abolition movement. Writes Finley: “Thoreau [sought] to shift their concern to their surrounding environment, believing … that the majority of Northerners would mobilize around antislavery when they felt their landscapes and their livelihoods, not just those of distant landscapes, were threatened.”

If this sounds familiar, it’s because this is what environmental justice activists often have to grapple with today: White environmentalists are often hesitant to join civil and human rights causes until they see what’s in it for them, usually in terms of nature conservation. “[Environmental justice] issues become a concern to [environmentalists] when they think there’s some utility for them in advancing EJ concerns,” longtime activist Vernice Miller-Travis told me recently. “Otherwise, these communities are invisible.”

“Thoreau was not interested in affirming racial hierarchies,” Finley told me, “but he’s trying to mobilize a community of white farmers who were themselves invested in white supremacism, but while also helping them feel that slavery is something that affects them and so they should mobilize against it.”

Meanwhile, there were plenty of black abolitionists who were also addressing the dual evils of racism and environmental injustice undergirding slavery. You can find it in Samuel Ringgold Ward’s Autobiography of a Fugitive Negro, Frederick Douglass’s second autobiography, My Bondage and My Freedom, and also in the Narrative of the Life and Adventures of Henry Bibb.

And of course Solomon Northup did this as well, in 12 Years a Slave. His memoir, and now the movie, showed how a whole race of people were subjugated under white supremacy and how that very system polluted America from its beginnings. And this was voted the best film of the year — a bold choice by the Academy, no doubt, and hopefully a recognition of how deep the pollutive effects of slavery have ravaged this nation.