Blood on the leaves: The hidden environmental story in "12 Years a Slave" 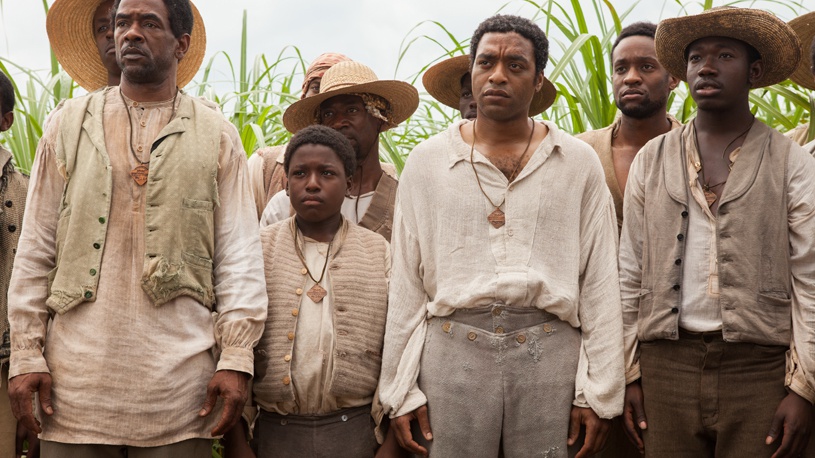 Blood on the leaves: The hidden environmental story in “12 Years a Slave”

The opening scene in 12 Years a Slave shows the main character, Solomon Northup, an African American born free but fraudulently sold into slavery, standing with other enslaved black men amidst sugar cane stalks rivaling their height. It’s the 1840s, Deep South Louisiana, and the men have no more value than the sugar around them. A white slave driver demonstrates how they should swing their machetes to shear the cane stalks and roots with precision, so as not to render the crop unfit for processing.

“Don’t be scared of ’em,” the driver implores.

The enslaved men could use the blades as instruments of liberation, especially given that they clearly outnumber their drivers. But throughout the movie you watch in horror as their masters swing whips, boards, and even bottles at them with the same overarm fury demonstrated in the cane stalking, breaking any defiant spirit in the process.

12 Years a Slave, which opens in theaters nationwide on Friday, is the cinematic rendition of Northup’s memoir of the same name, first published in 1853. His story of how he was kidnapped and separated from his wife and children in Saratoga, N.Y., and tossed into the vortex of Southern chattel slavery was an awakening account of the atrocities of slavery during a time when many believed Southern slaves were unbothered by their condition.

It’s a classic American tale of white supremacy, evinced by the slave owners’ frequent fondling and flogging of innocent black laborers, and by the way slave owners pillage almost every sign of life they encounter on the Southern landscape. “The existence of Slavery in its most cruel form among them, has a tendency to brutalize the humane and finer feelings of their nature,” Northup wrote of the slave owners under whom he suffered.

In a recent piece in the New York Times, Harvard history professor Walter Johnson describes the economic and environmental climate of the time period during which Northup’s enslavement occurred, and how it became the basis of the kind of disregard-the-environment capitalism practiced today. It was a climate built not only on African slave labor, but also on land stolen from the original inhabitants of the place — the Cherokees, Seminoles, Creeks, and Choctaws — and a steady flow of money from overseas, and from the North.

“Indian land, African-American labor, Atlantic finance and British industry synthesized into racial domination, profit, and economic development on a national and a global scale,” wrote Johnson, author of the book River of Dark Dreams: Slavery and Empire in the Cotton Kingdom. Here’s more:

[Native Americans’] expropriated land provided the foundation of the leading sector of the global economy in the first half of the 19th century. In the 1830s, hundreds of millions of acres of conquered land were surveyed and put up for sale by the United States. This vast privatization of the public domain touched off one of the greatest economic booms in the history of the world up to that time. Investment capital from Britain, the Continent and the Northern states poured into the land market.

Without slavery, however, the survey maps of the General Land Office would have remained a sort of science-fiction plan for a society that could never happen. Between 1820 and 1860 more than a million enslaved people were transported from the upper to the lower South, the vast majority by the venture-capitalist slave traders the slaves called “soul drivers.” The first wave cleared the region for cultivation. “Forests were literally dragged out by the roots,” the former slave John Parker remembered in “His Promised Land.” Those who followed planted the fields in cotton, which they then protected, picked, packed and shipped — from ‘sunup to sundown’ every day for the rest of their lives.

The visual message is that as goes the slave owners’ humanity, so goes man’s capacity to appreciate earth’s treasures, other than for profit. In one scene, enslaved men hack away recklessly at any tree trunk or branch in their sight while their master, John Tibeats, claps his hands, merrily singing “run, nigger, run,” encouraging them to sing and clap along with him. It’s the height of insult on top of injuries.

So land exploitation went hand-in-hand with the subjugation of human beings. One could not have happened without the other. And the two are still intertwined today. Recent documentaries like Leah Mahan’s Come Hell or High Water, Monique Verdin’s Louisiana, My Love, Lisa Biagiotti’s deepsouth, and Luisa Dantas’ Land of Opportunity deal with the similar issues in the same region today, where land is exploited to produce luxuries and comforts for the nation at the expense of both natural and human communities.

That is why 12 Years is more than a slavery story. It’s the story of America, with blood on the leaves of both Southern and Northern trees.