When reporters combed through the recently released National Climate Assessment, searching for news, they flagged the potential damage to the U.S. economy. Climate change could “knock as much as 10 percent off the size of the American economy by century’s end,” said a headline in the New York Times, and other outlets picked up the claim. When a reporter asked President Donald Trump about climate change devastating the economy, he responded, “I don’t believe it.”

The thing is, Trump’s statement is worth a second look. (Crazy, I know). That 10 percent projection comes from an outlier data point on a graph in the report. It’s what happens if we fail to reduce emissions at all, everything else also goes wrong, and temperatures rise 15 degrees Fahrenheit. It’s the worst-case scenario. A more reasonable person might be excused for saying he doesn’t believe the worst-case scenario will come to pass.

That said, even if you don’t focus on the 10 percent blow to gross domestic product — the rightmost point below — the rest of the graph suggests that climate change will almost certainly make the country poorer by 2100, especially if we fail to reduce emissions.

Why the huge range in these projections? Because there are huge unknowns, said Burke. “If you are looking at the historical record about how temperature affects agricultural production, for instance, there’s noise in the data, there’s sampling error, there’s a lot of uncertainty. And then there’s also a lot of uncertainty in how much warming we are going to see.”

These projections also mask the likely pain of economic contraction by lumping it all together into one number, said Gary Yohe, an economist at Wesleyan who reviewed the report for the National Academy of Science. In fact, people living in the Southeast are likely to get poorer while people in the North may actually benefit. 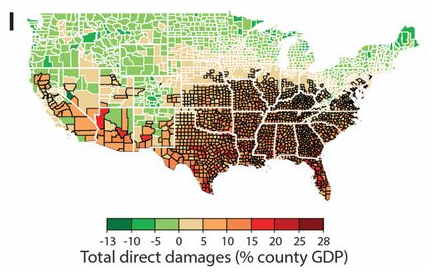 The point is to avoid fixating on any particular number, like 10 percent, Yohe said. “I’m afraid that the report will be dismissed, not because it’s 2 percent, or 10 percent but because 2100 seems really far away. Who cares? How do we refocus back to something people will understand? People are looking out their windows and seeing climate change. People look at their TVs and see California burning. These aren’t projections or estimates, they are observable facts.”

So what should we focus on? Let’s look at what the report actually says: Unless we really get our act together “climate change is projected to impose substantial damages to the U.S. economy, human, health, and the environment.”

And you don’t need to wait for the projections to come true. The report, and Grist, have documented dozens of ways in which climate change is already causing financial distress, right now. In the Southeast residents in 60 percent of cities are already paying for more air conditioning as heat waves increase, and “high tide flooding already poses daily risks to businesses, neighborhoods, infrastructure, transportation, and ecosystems in the region.” In the West, a 2006 heat wave caused some “600 deaths, 16,000 emergency room visits, 1,100 hospitalizations in California, and economic costs of $5.4 billion.” In Oklahoma and Texas, flooding “caused an estimated $2.6 billion in damage in 2015.” Last year, climate-related disasters cost the United States over $300 billion. The report predicts the bill will keep rising.

We can argue about whether climate change will someday “devastate the economy,” but there’s no arguing with the fact that we are already spending heaps of money on crap that we might have avoided.

We need to talk