My social media bubble tells me that coastal liberals work to protect nature, while inland conservatives seek to exploit it.

That might seem like a useful stereotype to explain elections and, say, the popularity of hunting, but, like most stereotypes, it obscures more than it reveals. Farmers and ranchers manage some two-thirds of the land in the United States, and are responsible for some extraordinary environmental improvements. Not to say every conservative farmer is a stewardship superstar, but you’d be surprised by how many are.

“There’s been a desire to cast everyone as good or bad,” said Miriam Horn, an author who works for the Environmental Defense Fund. “But there’s a whole world of people doing really important work who get written off, ignored, or demonized.”

Look at results, not stereotypes — that’s the underlying message in her book, Rancher, Farmer, Fisherman: Conservation Heroes of the American Heartland. A documentary based on the book is screening at film festivals around Earth Day and is scheduled to run on Discovery Channel in August.

In her book, Horn profiles a Montana rancher, a Kansas farmer, a Mississippi riverman, a Louisiana shrimper, and a Gulf fisherman, all working to save the natural resources under their care. I talked to Horn about that Kansas farmer: Justin Knopf, one of this year’s Grist 50. He’s a no-till farmer, which means that he works to keep the community of roots, worms, and bugs that live in the soil intact, instead of breaking them up with a plow. He also grows cover crops, keeping soil from blowing away and preventing pesticides and fertilizers from sliding into streams. These techniques suck carbon out of the air, where it fuels global warming, and adds it into the soil, where it helps provide bountiful harvests.

Our interview has been edited and condensed for clarity.

A. If we are going to move forward, we are all going to have to learn from each other. And the people I wrote about were all eager to learn from me and eager to be argued with. They are not walking around with the sense that they have all the right answers by any means. At this very grim moment, it’s wonderful to see people who aren’t dug into their little trenches, who are willing to reach across political divides and all kinds of divides.

Q. Can you describe the farmer that you write about — Justin Knopf — and his operation?

A. Justin farms close to 5,000 acres in Salina, Kansas. It’s a fifth-generation farm — his mother’s family emigrated from Sweden in the 19th century and homesteaded it right after the Civil War. So his family busted that sod and then lived through the consequences of ripping up those 20 to 30 feet of roots during the Dust Bowl.

When Justin started farming, he just could not get ahead of these terrible weed infestations and these low yields, so he kept doubling down on the strategies that the previous generations had used: more plowing, burning off the weeds, pouring on more fertilizer. It was all getting worse, and he was watching the soil run off into the ditch.

Then he went off to Kansas State and studied with, most notably, Chuck Rice, a great soil microbiologist. He came back and persuaded his dad and brother to convert the whole farm to a no-till operation.

At this point, they haven’t tilled their soil for about 20 years. Their cover crops are often a mix of eight or 10 crops, each for a different role: One might have a big umbrella-shaped leaf to shield the soil from pounding rain, another might be a radish to create a nice big water channel into the soil, another might be something that microbes really like, and then something like an oat that grows fast and blocks the weeds.

Q. And he’s no longer plagued by weed problems, and has seen yields more than double the local average. But he’s also made big missteps. How is he able to experiment and still make money?

A. This is one reason why I admire the subjects in my book so much. They really are putting their families’ livelihoods on the line. They are constantly balancing that desire to create something really lasting, with potentially bankrupting their family.

Part of the answer is that some of Justin’s experiments have worked. The weather in Kansas has been really erratic — heatwaves, blizzards, droughts — and the average yields have been just as volatile. But Justin’s yields really stabilized, and stayed high, because his soil is so protected. So he has enough financial stability to keep pushing further.

Another part of it is that I’ve never met anybody who works harder or longer than Justin. And he works closely with scientists and other farmers, so he’s not on his own.

A. Yes, there’s this great group, No-till on the Plains. One of the funniest moments in working on this book was going to their conference and watching these farmers showing off these pictures of their worms on their cellphones. There was this farmer from Texas that Justin really loves because they are both creationist Christians — so they are both motivated by a sense of taking care of the garden — and this guy had a worm that was the size of your arm and everyone wanted to see the picture. I thought that was hilarious.

A. Right, we can have worm competitions.

Q. When you say “protecting the soil,” for most of us that’s pretty opaque because, well, soil is opaque, it’s underground. But you have this lovely scene where Justin makes a big hole in the ground and compares it to soil that’s been plowed a long time. Can you explain what differences he sees?

A. The soil we are accustomed to seeing is stripped bare — the idea was to get nature out of the way so we could plant what we wanted without competition. The biggest difference with no till is that it’s not stripped naked. You walk into one of Justin’s fields and it’s like walking on a tatami mat — this wonderfully thick carpet of stubble, and corn cobs, and leaves. The other part of no till is leaving the soil undisturbed. I’ve seen healthy soil likened to a coral reef or a nice chocolate cake. It’s got a tremendous amount of space in it, which allows water and organisms to move through it. 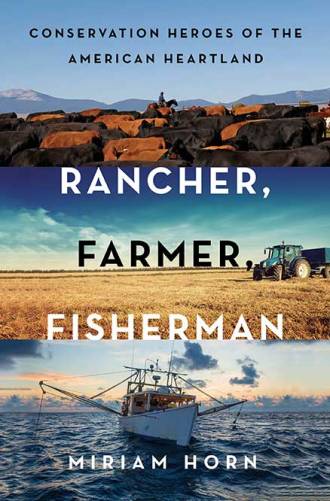 So Justin will dig a pit six-to-10 feet deep and look at all the layers, the evidence of life, the earthworms, the silvery spiderwebs of fungi, the water pores. So he was showing us where an alfalfa root had come down — and these legumes will send roots down 30 feet, carving out an opening for water. And if you don’t plow the soil, that pore will stay there and water will be able to run all the way down.

Q. The conventional wisdom is that trying to improve industrial farming is like making SUVs more aerodynamic. What we really want is to just get rid of them. What’s wrong with that reasoning?

A. I guess I have to start with vocabulary. Justin isn’t organic, but he’s also not anything like an SUV. I guess most people would think the Prius in that analogy would be small, and use organic methods, and cater to a local market — but none of those things tell you whether the farm is sustainable.

I did a piece for PBS NewsHour, entitled When Industrial-Scale Farming is the Sustainable Path, and intentionally used the word “industrial” to poke at that hornet’s nest. But it was because I feel like people think big, industrial, conventional, unsustainable all mean the same thing, and they don’t. The categories we’ve been relying on just aren’t very useful. The questions shouldn’t be: Is it organic? Is it small? The questions have to be: What kind of biodiversity is being maintained in the soil? How efficient is the soil at capturing and holding water? What’s running off from that field? How well is your crop getting along with the native biota?

Q. In other words, we should champion farmers who are good for the environment, not one particular class of farmers.

A. My goal is the opposite of pitting one kind of farmer against another. My goal is to celebrate the people who are thinking about the whole system, who are really being honest about the tradeoffs, and who are accepting that you are never there — that you have to keep getting better. That’s what’s heroic to me.