The company that saw the most successful first day in U.S. IPO listings since the 2008 financial crisis? Fake meat. Last Thursday, when Beyond Meat hit the stock market, shares increased an incredible 163 percent in value to $65.75 by closing. The company’s skyrocketing success definitely made for some happy plant-based steakholders.

The company, which makes vegan beef and sausage substitutes, sold over 9.6 million shares and made $241 million on the first day alone. Although analysts expect shares to stabilize lower eventually, today, shares are still valued at around $72.

It’s a big year for meat substitutes. With celebrities like Katy Perry dressing as a vegan burger for the Met Gala, and Patriots star Tom Brady sustaining his Superbowl-winning athleticism on a mostly plant-based diet, it seems that meat is out, and fake meat is in. Although veganism and vegetarianism rates tend to stay steady, it seems more Americans are willing to put down the beef; younger generations in particular are more interested in plant-based diets.

Beyond Meat’s prices are expected to drop further in the coming months as other companies jump on board the meatless meat train. Fast food chains like Burger King and McDonald’s have already started selling veggie burgers, and Beyond Meat’s competitor Impossible Burger is selling burgers nearly faster than it can make them.

Even traditional animal-product businesses are responding to the growing plant-product protein trend. Meat giant Tyson Foods owned a 6.5 percent stake in Beyond Meat. and also backed startups Memphis Meats (read Grist’s coverage of CEO and co-founder Uma Valeti) and Future Meat Technologies Ltd. It only recently sold its Beyond Meat shares as it announced its own plans to begin production of a plant-based protein.

Cargill Protein, another longtime meat company, has sunk nearly $1 million in the past few years to developing alternative meats, including investing in Memphis Meats. Many of these “Big Meat” companies are now stepping out of the shadows and outwardly rebranding themselves and their product lines to include meat alternatives as well — McDonald’s new veggie burger is a product of Nestle NA, and Kellogg is developing imitation chicken in addition to a veggie burger it already offers.

Since the first “Gardenburgers” were served up in 1981, meat alternatives have come a long way. But they’re not the only plant-based alternative with secret animal-product suitors.

Big Dairy, while outwardly attempting to censor how plant-based milks brand themselves, is slowly expanding its reach into the non-dairy world, as recently reported in Bloomberg. Good Karma Foods Flax Milk? The majority stake is owned by dairy company Dean Foods. Silk’s line of soy and nut milks? Owned by French dairy giant, Danone. While yogurt giant Chobani claimed in comments to the FDA last September that the use of dairy terminology on non-dairy products posed “a public health risk” and should be “illegal,” they, too, have launched a line of dairy alternative yogurts — labelled as non-dairy coconut blend, of course. 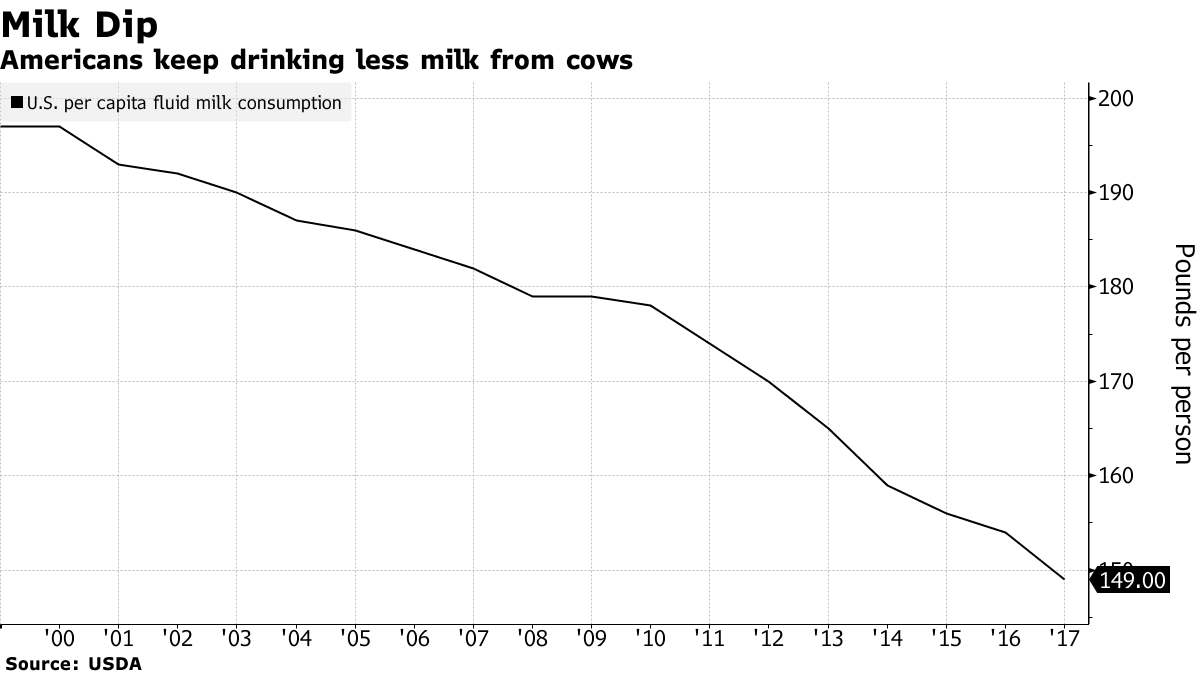 Part of this jumping on the plant-milk bandwagon may be a survival tactic for the dairy industry. Milk consumption has seen a 40 percent drop in about as many years.

For now, the meat industry still seems to have a solid stronghold in American diets. Will the fake meat hype just be a bubble or could meat be heading in a similar direction?