How can I have a wedding registry that isn't totally wasteful? 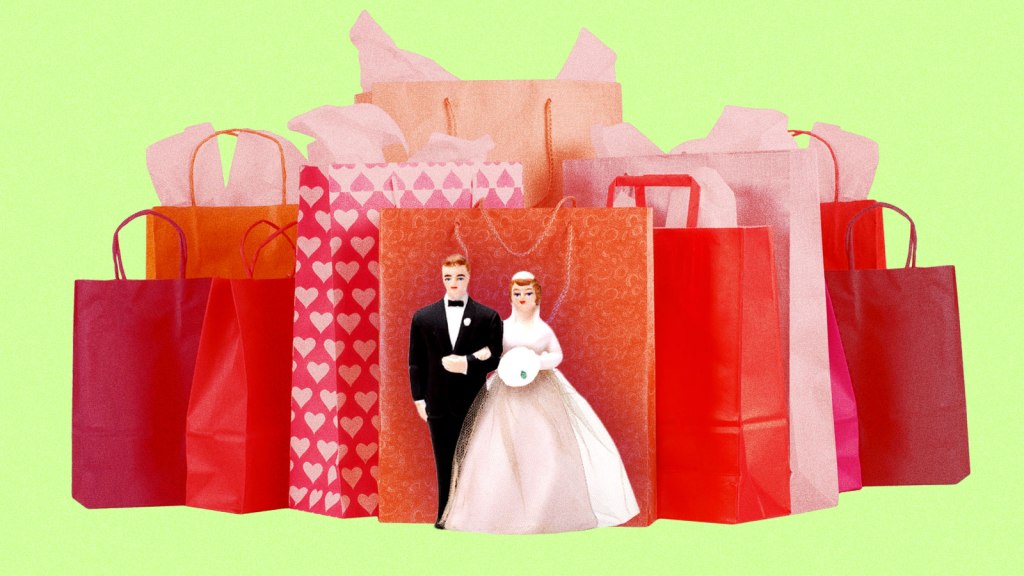 How can I have a wedding registry that isn’t totally wasteful?

Q. I’m getting married and we have recently started setting up a registry. Are there ways to make my registry more sustainable?

— Woe to the Wasteful Wedding

Weddings are hot on my mind right now because I’m going to seven of them this year and flying cross-country for four of them. That’s a huge carbon expenditure just to see some people say a few sentences and smooch. Just kidding, Lily! I can’t wait. (I actually am just kidding, because my greatest joys in life include parties, love, combinations of parties and love, and seeing friends and family who live far away.)

Think about it: Weddings usually involve flying lots of people in, feeding them some kind of meat (or your dad will throw a fit), and forcing the purchase of half a dozen bridesmaids’ dresses that will be worn once, then ritually burned in a pool of gasoline. And then there are all the gifts — the manufacturing, packing, and shipping of $300 “necessities” like … marble cheeseboards!

As I learned from Racked, the modern concept of the wedding registry is, shall we say, a bit outdated. It evolved from the tradition of the bride’s dowry, when your dad would give a guy a pile of goats to entice him to marry you. While my boyfriend would probably be delighted with this arrangement, it doesn’t translate well to the 21st century. But even in the long history of marriage traditions, guests giving gifts is a relatively new conceit. It wasn’t exactly the norm until around 1924, when Macy’s invented the first gift registry — a wish list of every teacup and stereophone the happy couple could want.

But nearly 100 years have passed since then and lots has changed. Women are more independent. People are getting married older, when their lives are already pretty established. Sixty percent of people have lived with a romantic partner before they choose to get hitched, meaning they probably already own at least a few pieces of dinnerware.

Suffice it to say, the nice thing about getting married in 2019 is that you have a lot more freedom to make your wedding as nontraditional as you want. If you want to completely transform the practice of wedding registries, you’re far from alone.

I’ve come up with two different ways to do this, depending on what you need.

If you don’t need money or stuff:

Your first option is to forego a registry altogether. No gifts, no waste!

But there are some guests who feel the need to give the happy couple something. No one wants to look cheap or inconsiderate. Solution: You can ask guests to redirect their gift funds in a more altruistic direction, such as toward a few environmental organizations that you suggest. (Read on for ideas of how to pick which ones!) Make sure to explain what those organizations do that’s important to you so your guests actually know what they’re supporting. Blueprint, Zola, and Plumfund are all options to create an online donation registry. (Blueprint and Zola are more specifically wedding-oriented.)

You can also ask your invitees to buy a carbon offset for their trip to your wedding, as well as contribute to one for the event itself. But quick note: There’s some controversy about whether carbon offsets are worthwhile or not. (We explain this here.) You can sidestep that debate by asking your guests to donate to an effective organization involved in combating climate change. What does that mean? Check out this list from Project Drawdown to learn about the most effective ways to fight climate change, and then do a little research on the most well-regarded organizations working on them.

You know what wedding guests also love? A challenge! Maybe not, but they’ll be feeling a little more open-minded when you tell them they don’t need to buy you anything. Add a page of your wedding website explaining — succinctly and engagingly! — why the climate and environment are important to you. Then, ask if your guests would like to pledge to adopt some kind of carbon-reducing practice in honor of your union — say, reducing their meat consumption, cutting down on flying, or taking public transit to work instead of driving. Boom! You’re a green influencer.

If you do need money or stuff:

Not everyone is headed into married life with a solid cushion of worldly goods — far from it.

But before you and your beloved go wild with the gift scanning gun, do a realistic and comprehensive inventory of what you already have and actually need to supplement or replace before putting together your registry. If you’ve been invited to a wedding during this century, you have played the game of: What is the most ridiculous thing on this registry? A bespoke milk steamer. A tortilla maker made out of volcanic rock from Iceland. Miniature pie tins in the shape of Pennsylvania.

I think this phenomenon exists because the wedding industrial complex urges couples to conjure up this Ina Garten-infused fantasy of what their married life will be like, so they’ll request the accessories to facilitate that lifestyle. The most environmentally irresponsible wedding registry is one that ships a bunch of stuff to your house that you’ll never use. So you’ll automatically improve the environmental footprint of your list by only asking for what you need. If that means asking for cash toward a future down payment or the planned expense of a future baby, that’s totally fine! A comparatively sustainable choice! You can use Tendr for this.

A brief aside on the subject of honeymoons, which is an increasingly popular registry choice for couples: What I’ll say is I’m always pro-experience over stuff as far as gifts go. But if you’re choosing a honeymoon-based registry for the sole purpose of its being a greener option, you’ve got to put some real effort into making the honeymoon itself a pretty low-impact affair.

If you’re using the registry to ask for practical housewares, you have an opportunity to hand-pick what businesses you’re supporting with your wedding registry. It doesn’t have to be Amazon just because they have the easiest layout! And again, asking for cash doesn’t have to be gauche if you’re asking for it for a particular purpose.

You can explain to your guests that you’d like them to contribute to a fund that will enable you and your betrothed to outfit your home using some local producer or secondhand store that might not have a straightforward registry option. That way, you also get to procrastinate on figuring out exactly what you need for your home until after the wedding stress is over. It’s ideal!

Perhaps you decide that you already own all the Fiestaware you could dream of, but now that you’re settling into married life, you want to make a big, green transformation to your lifestyle — less Ina, more Umbra, you know? Say you want to put solar panels on your house, or switch to an electric car, or replace your appliances with more energy-efficient ones, or buy a pair of e-bikes. Those are the kinds of lifestyle changes that actually do make a big difference in your personal carbon impact, but they’re also expensive.

Instead of a registry page on your wedding website, make a page (using any platform of your choice) briefly explaining the change you want to make, the carbon or energy it could save for your footprint as a couple, and how much it costs. Ask guests, in lieu of a gift, to donate what they can to that project.

I’m assuming that environmental awareness is really important to you, WWW, or you wouldn’t be asking this question in the first place. So when you’re considering all these different ways to green your wedding registry, also think about a really clear and non-judgy way to communicate to your friends and family why it’s important to you. That way, you might change some minds — and the next wedding gift you buy could be a Grist donation instead of a Juicero.