The Mon Valley in western Pennsylvania was once at the center of an industrial revolution that put the United States on the map, but you might have trouble picking out some of its towns on that map now.

“These communities have been neglected by everybody,” says Veronica Coptis, the executive director of the Center for Coalfield Justice and a longtime resident of Greene County. She grew up among the emptied-out towns that first sprung up beside the steel factories and coal mines that once lined the Monongahela River for miles.

Now those steel plants are gone, and many of the mines have closed. The coal mines still in operation are largely mechanized, operated by an ever-dwindling number of non-unionized laborers. The Center for Coalfield Justice, based in Greene and Washington Counties, works to protect the rights of people living in mining towns, filing legal challenges and advocating for better policy from the state government.

The work does not make Coptis popular with all of her neighbors.

“My rule of thumb is that I will have any conversation with anyone, but I will not be yelled at,” Coptis tells me. She spends a lot of her time having hard conversations with coal miners who distrust environmental activists on principle, until they realize she is a local fighting for the future of her home. 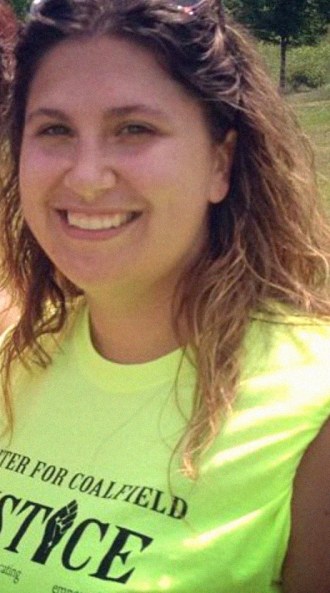 “Almost all of our staff live in the community, and most of our board of directors and our volunteers” Coptis says. “Our organization is really rooted here.”

Coptis became an activist after the lake in her local Ryerson Station State Park — popular as a local boating and fishing retreat — was drained in 2005 to make way for coal mining. The recreation supported by the lake was one of the only economic activities not linked to mining in the area, and its disappearance left Greene County in even more precarious straits than before.

Coal generation makes up about a third of the United States’ power supply — a share that has been shrinking thanks to a boom in natural gas, among other factors. As the end of coal looks more and more inevitable, so does the need for “just transitions.” That is, the engineering of fair economic and environmental conditions for communities who have historically relied on fossil fuel extraction.

This is what Coptis’ work comes down to: an effort to build a better future for people whose lives have always been entwined with the fortunes of the coal industry.

Our conversation has been edited and condensed for clarity. You can read our cover story on Germany’s just transition here: Life After Coal.

Q.What are some of the misconceptions that people (like me!) tend to have about life in coal counties?

A. I think people believe the narrative that nobody in these communities wants something better. There’s been a lot of, “These rural towns don’t know any better, they’re too dumb to know any better.”

And I would say it’s not that they’re dumb or that they don’t know any better, it’s that these communities have been neglected by everybody, by the Democratic party and by the Republican party. They are just hoping for anything that could be better.

I do find it very ironic that the narrative from some coal workers today is, “This is our identity and our history and we’re doing our grandfathers justice.” Actually, most of their grandfathers were probably union miners and would be super pissed that they’re taking additional cuts and buying the industry propaganda. Historically, the workers were never about the boss. The job was important, the coal industry built our communities, but we never liked the company. The company was always the culprit.

Our community organizer, her grandfather was a coal miner. He made a good salary and he was very intentional that none of his children would ever be coal miners. People actually weren’t like, “Yeah, I want my kid to work in the coal mine.” It only happened generationally because these communities for generations have had no other options.

Q.And what about now, how is the presence of coal mining companies mostly felt these days?

A. The national narrative is “coal is dead.” To the community that I belong to, it’s still very central to our economy. We may hear, for example, there’s only 70,000 jobs in the coal industry, but those jobs are extremely important to people living in our communities. Even if you had one of only 20 jobs, if you’re the one person who loses that job, your entire household is uprooted.

The industry is the biggest culprit for the job loss. They mechanized mining, and that was the biggest loss of jobs over several decades. It wasn’t regulation. It was the increasing mechanization of extraction.

Q. Is there any resentment toward the coal mining companies for that?

A. The industry has done a good job of selling the story they need to sell. If they have someone in the president’s seat that they don’t see as an ally, then it’s the regulation and the president that are the problem. But if they have a friend in the office, like they do with Trump, then they have to quickly blame environmental groups for the loss of the jobs.

The mercury regulation and standards that power plants recently had to start complying with was passed under Bush. It’s not like the government passes a regulation and says now you have to follow it. They actually give you time as a business to plan.

Q.It sounds like there is a lot of misunderstanding about how coal companies respond to regulation. How do you talk to people about these issues as an organizer?

A. Where we do the best work — and this is where I recommend anyone who’s trying to do this should start — is just in a one-on-one conversation.

When we talk about economic issues about coal mining, we don’t talk a lot about regulation. The reality is that coal in Greene County is going to be mined out. Long-wall mining happens at such a quick rate that it’s only a matter of 20 to 30 years before the Pittsburgh coal seam that they’re mining doesn’t exist anymore.

So that gets us away from the argument about whether it’s regulation or mechanization killing jobs. If there’s no more coal left, then there’s no more mining. And that’s going to happen in my lifetime as a young adult in Greene County. We can see the writing on the wall, so why aren’t we planning? Why are we pretending like this isn’t going to happen when we’ve actually seen this happen in other communities?

Q. How do you open a conversation like that?

We want to hear from everybody. Whether or not you agree with our organization’s mission. We’re not just concerned about the ability of the people who support the Center for Coalfield Justice to have a future and raise families. We’re concerned about everybody’s ability to do that.

We had a coal miner call our office wondering why we cared so much about protecting one stream over their job. I talked with that individual about looking at the longer-term future of this community — it’s going to be dependent on having this stream as a recreational source. And I heard out his concerns, which were valid, about when he was going to go back to work and if he was going to be able to support his family. We agreed to disagree at the end of the conversation, but we were able to have a civil conversation as two people.

Q. It says something about us, doesn’t it, that having a civil conversation can feel like a radical act?

Q. What does it mean when a big industry leaves a region? You hear a lot about companies making a sudden departure with no responsibility for what’s left behind.

A. We’re still learning about the bankruptcy process that coal companies tend to go through. In 2015, Alpha Natural Resources filed for bankruptcy. They were operating two mines in Greene County. One of the mines they closed completely and the other one is still operating. But while they were going through bankruptcy, for an entire year, everything got stalled — any disputes with community members to get their home fixed or their water replaced, any taxes they’re supposed to pay the school district.

The trend in history is: Coal companies go bankrupt, they shift all of their liabilities into one company, and that company goes bankrupt so they get out of all their environmental cleanup responsibility.

More importantly, they’re getting out of their retirement, healthcare, and pension responsibility, too. So then we have a whole retired community that no longer has an income or healthcare. And these aren’t people that retired from a job healthy; these are men and women who are sick because they worked a very dangerous and grueling job in the mines.

Q. How do you start to think about replacing mining in Greene County?

A. There’s a lot of focus on the job loss, but the bigger and harder issue to tackle will be taxes. About 40 percent of Greene County’s budget comes from coal property taxes. And when these companies go bankrupt or aren’t operating anymore, they aren’t paying those taxes. That doesn’t just impact the people working in the mine. That impacts every person living in the vicinity.

And the Trump administration is talking about gutting the very little government assistance we have. They’re talking about defunding the Appalachian Regional Commission, which actually supports economic projects on the ground. Trump says he wants to help coal miners, but really what they’re going to do is hurt coal miners and help coal companies.

Q. Can renewable energy businesses take the place of coal companies? Or is that too simplistic?

A. I think that renewable energy is going to play a role. But what got us in this situation of economic uncertainty is a single-force economy. Our economy’s gonna be shifting no matter what, so we need to make it as diverse as possible because that makes it as resilient as possible. Renewable energy should be a piece, but not the only piece.

Q. Are you hopeful about the future?

A. I do have a lot of hope that as communities we have the ability to hold these companies accountable. For years, the community I’m a part of has been told we should be grateful for the company, and we have no power without them. But that’s shifting. People are realizing that if they come together and organize and make demands, those demands can be met.

The Koch brothers preached the fossil fuel gospel in Virginia. Then, black churches fought back.