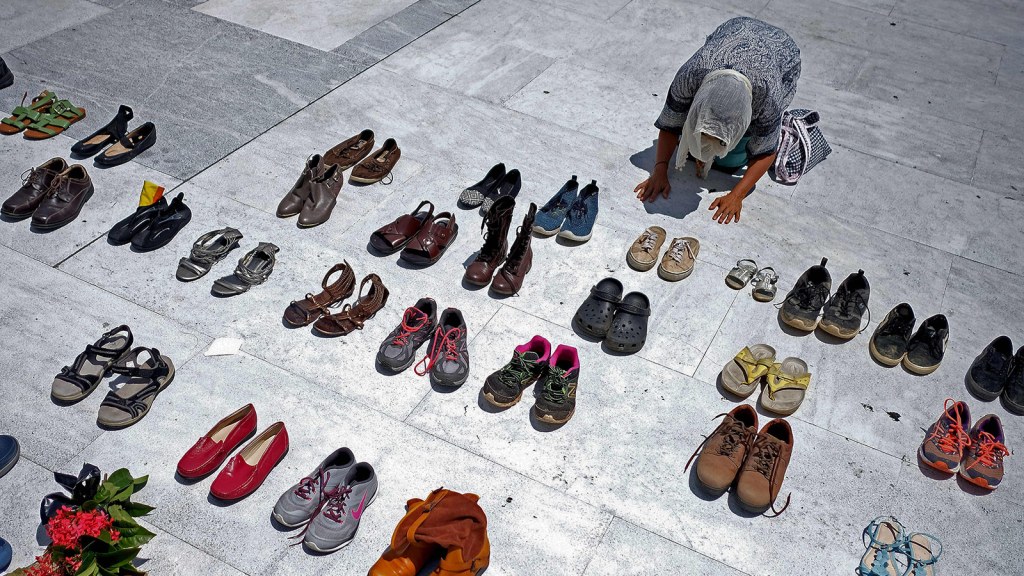 A woman prays in front of hundreds of shoes displayed in memory of those killed by Hurricane Maria. Ricardo Arduengo / AFP / Getty Images
hurricane maria

A new report commissioned by the Puerto Rico government estimated that 2,975 people died in the aftermath of Hurricane Maria.

On Tuesday, Governor Ricardo Rosselló officially raised the hurricane’s death toll to match the report’s findings, making Maria the deadliest U.S. hurricane since a 1900 storm that hit Texas. In an interview with CBS News, Rosselló said his administration will take concrete steps to address the report.

It’s now absolutely clear that Hurricane Maria was a humanitarian tragedy with little precedent in modern American history. Carmen Yulín Cruz, the mayor of San Juan and frequent critic of President Trump, called the new death toll “shameful” and a “violation of our human rights.”

It often feels as if we are waiting for Trump to do something truly disastrous as president. But it already happened. Profound White House negligence and disregard for Puerto Rico in the wake of Maria is exacerbated the crisis, causing many deaths.

The report has spurred renewed calls for a more complete understanding of just what went wrong in the storm’s aftermath, and justice for the victims and their families. Earlier this summer, lawmakers, including senators Elizabeth Warren and Kirsten Gillibrand, pushed for an independent commission to look into the government’s bungled response.

New #Maria death toll numbers are a tragic reminder of how our nation failed Puerto Rico. We must ensure an accurate death count for future disasters. That’s why I’ve joined @SenKamalaHarris to introduce the COUNT Act, a bill to develop federal standards for counting fatalities.

House candidate Alexandria Ocasio-Cortez has called for a “Marshall Plan” to rebuild the island to be carbon-neutral and address long-standing racial and economic inequalities. Many of Maria’s deaths were likely preventable, and Tuesday’s report, conducted by George Washington University, noted that the island was not adequately prepared for such a storm.

Maria was one of the strongest hurricanes ever recorded in the Atlantic, and caused a months-long breakdown in basic services on Puerto Rico, including a 328-day power outage, one of the worst in world history. As ocean waters warm, strong hurricanes like Maria are expected to become more common, and produce heavier downpours and more damaging coastal floods.

The death toll increase on Tuesday was nearly 50 times higher than the previous official count — 64, where it had been since the initial weeks after the storm. Trump, on his post-storm visit to Puerto Rico, held up a low death count to boast that it was not a “real catastrophe like Katrina.” For context, about 1,000 more people died in Maria than in Hurricane Katrina, the 2005 storm that hit New Orleans. According to the updated count, Hurricane Maria killed about the same number of people who died on 9/11.