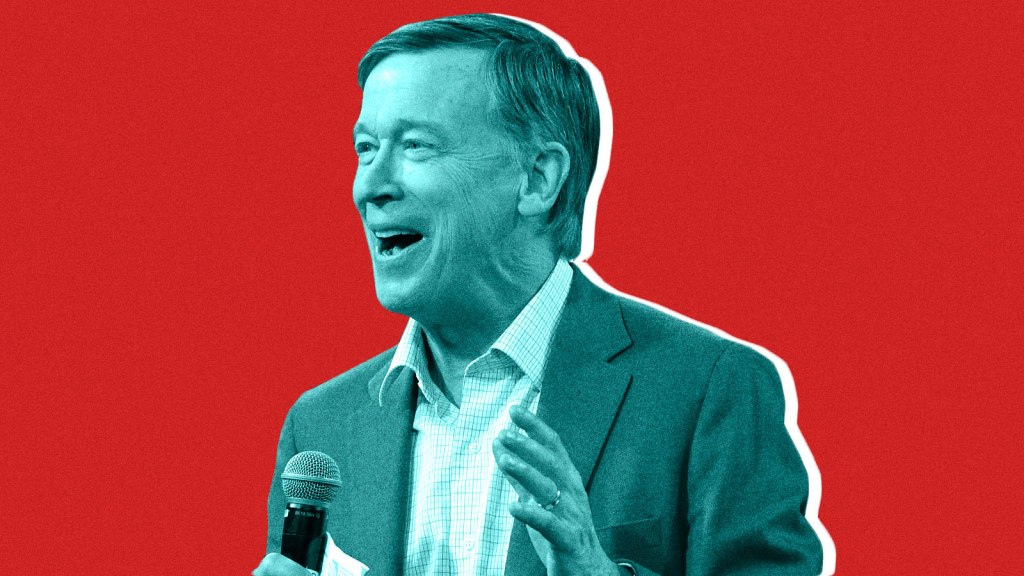 Unless your name is Joe Biden, standing out in the crowded Democratic primary field is no easy feat. John Hickenlooper is one of the only self-identified moderate candidates in the field — he briefly considered running on a “unity ticket” with Republican and former Ohio Governor John Kasich. The moderate is polling between 0 and 1 percent. With little national name recognition to work with, the former governor of Colorado has a particularly steep hill to climb if he wants to garner support in a primary that appears to be skewing ever leftward.

On Thursday, Hickenlooper, the only scientist running for president, started his ascent with a brand new climate plan.

His proposal, one of a handful of climate plans introduced thus far by 2020 candidates, has many elements found in plans that more vocal climate hawks have already offered: re-enter the Paris climate agreement, employ the youth through some kind of climate corps, invest in green tech research, etc.

But Hickenlooper’s plan diverges from other candidates’ on the Green New Deal, a progressive proposal that has turned into a litmus test for many better-known candidates.

In the opening paragraphs of a Medium post that details his plan, Hickenlooper pledges to approach the climate issue the “right way.” That means a climate plan that doesn’t include add-ons that “distract from addressing climate change directly.” He takes particular issue with a federal jobs guarantee — a prominent and controversial piece of the resolution introduced in February by Representative Alexandria Ocasio-Cortez and Senator Ed Markey. No other candidate’s climate plan has implied that the Green New Deal could alienate many taxpayers, but Hickenlooper doesn’t mince words when he posits that the proposal “might trigger a backlash that dooms the fight against climate change.”

Unlike some of his 2020 rivals who have made full-throated endorsements of the Green New Deal, Hickenlooper has green successes to point to. As the former mayor of Denver and governor of Colorado, he launched clean energy projects, enacted climate legislation, and boosted renewable energy production. In 2018, he set up the Colorado Clean Energy Fund, which set up a “green bank” to invest in renewable energy projects. He worked with environmental groups and oil and gas companies to develop a set of methane emissions laws in Colorado that President Obama’s EPA later used as a model for federal methane regulations.

On that last item, “Frackenlooper,” as his environmental critics call him, has a history of working closely with the oil and gas industries in Colorado. And that perceived coziness could bite him down the line. He opposed two anti-fracking measures in his state in 2014, and has been a proponent of natural gas development. In his 2016 memoir, the governor described fracking as “good for the country’s energy supply, our national security, our economy, and our environment.” Oh, and did we mention the fact that he worked as a petroleum geologist in the ‘80s? (We should probably also note he cofounded a craft brewery after that.)

Hickenlooper’s plan seems to be banking on the notion that climate-conscious voters want a president who knows how the oil and gas industry operates and can work with those industries to bring down emissions. But higher-polling candidates, including frontrunner Biden, have vowed to eliminate subsidies for fossil fuels and reject campaign donations from fossil fuels.

Will Hickenlooper’s argument that the Green New Deal “would be an historic mistake” and “load America’s climate change agenda with provisions that would polarize the issue and limit support” resonate with voters?

Some polls indicate it might not, even in Hickenlooper’s own state. A 2019 poll commissioned by Data for Progress found 60 percent of likely Colorado voters support the Green New Deal. The group also found that most voters nationwide support the individual policies within the deal. If Hickenlooper is to be believed, supporting the Green New Deal could doom climate action to the dustbin of history. But the Democrat’s decision not to support it, paired with his virtual anonymity, could doom his presidential bid to the garbage heap of American politics.