In 1950, the Italian physicist Enrico Fermi posed a question to his lunch companions: Why haven’t we encountered intelligent life in our universe when there’s a high probability that it exists?

In an attempt to answer what became known as Fermi’s Paradox, experimental philosopher and conceptual artist Jonathon Keats examined human society and concluded that Well, we’re not a particularly welcoming bunch. Maybe our space neighbors haven’t said hello because they don’t feel wanted by Earthfolk. They likely sense hostility toward outsiders in our media, our demeanor, our way of expressing ourselves — which, of course.

To that end, Keats is extending a hand to Fermi’s theoretical extraterrestrial friends with an actual welcome mat. Even if the project doesn’t draw any actual martians, he hopes this common, even clichéd, symbol of hospitality can help us address alienation and growing polarization on our own planet.

Keats has devoted many of his projects to thinking about how to bridge divides. In 2015, for example, he issued a proposal, complete with diagrams, to smush the continents together with magnetrons and nuclear reactors to address fundamental issues in geopolitics. In 2016, he devised a method of fostering better understanding of climate science through literally eating climate models.

The Cosmic Welcome Mat is not supersized, viewable from space, nor merely conceptual. It is as quotidian an object as you might find outside of any American door — or rather, Australian, as it’s currently on display at the International Aeronautical Congress in Adelaide. Additionally, four doormat-sized versions of the Cosmic Welcome Mat will be placed at thresholds around the campus of Adelaide’s Flinders University.

So, how do you make the “welcome” message clear to intergalactic visitors? Keats consulted space archaeologist Alice Gorman to help tailor the mats to potential alien tastes. Each version is printed with different jewel-colored blobs — “it’s actually quite hard,” Keats says, “to design a blob that doesn’t look like anything else” — that signify fundamental concepts. The pairs of cloud-like shapes symbolize growth to indicate progression of time, stretching to suggest travel and distance between homes, and merging to represent fitting into a welcome environment. These are all iterations of “the language of welcomeness,” Keats explains. 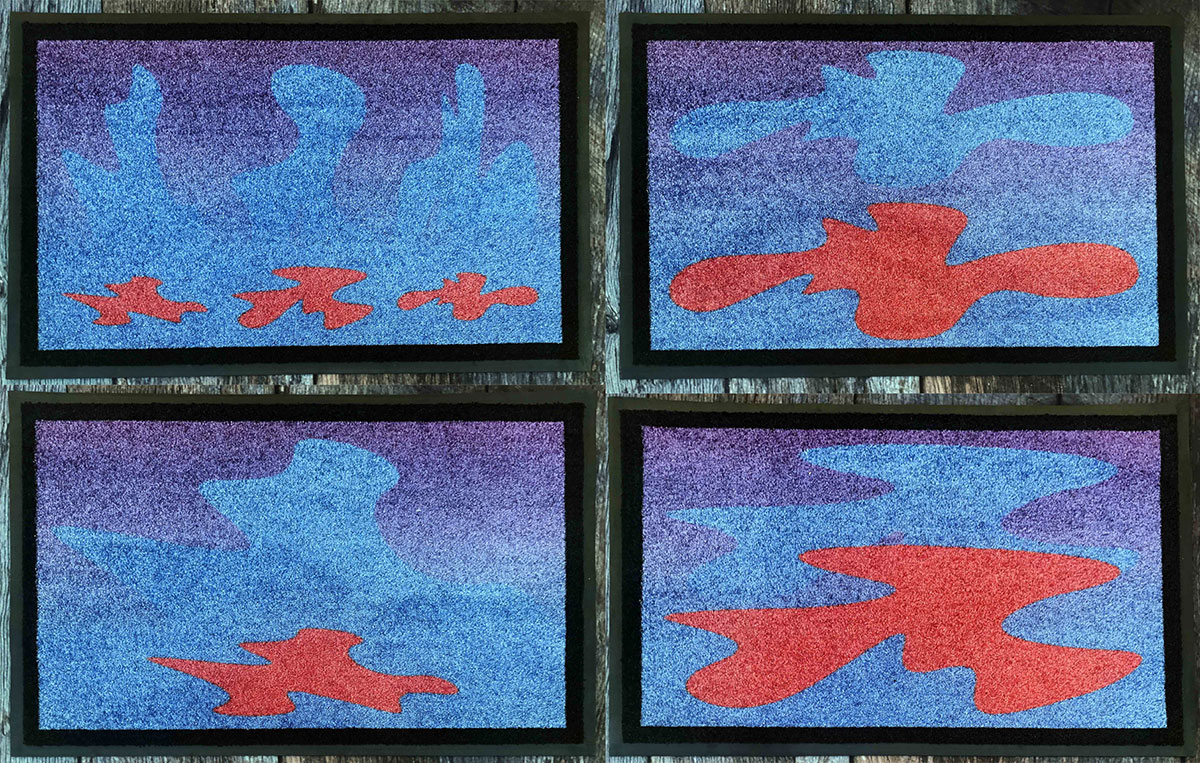 This project may sound slightly insane, but our approach to space communication has always been bizarre. Carl Sagan helped design a plaque sent to Jupiter on the Pioneer 10 spacecraft in 1972. The plaque bears an illustration of a man and woman with a full, detailed pubic package on the former and Barbie-blank canvas on the latter. The Golden Record, carried on each of NASA’s Voyager space probes in 1977, contains a greeting unfortunately recorded by former Nazi and then-Secretary General of the United Nations Kurt Waldheim. It also includes this extremely peculiar photo collage of people eating things:

The worst way to show hospitality to a stranger is to focus on oneself — which is, Keats notes, the primary characteristic of most of our attempts at space communication. “Generally speaking, it’s been about us,” he says. “It’s like going to a cocktail party and talking about yourself, indefinitely.”

Truly inviting foreign beings into our homes requires looking upon ourselves from the perspective of outsiders. It requires questioning our assumptions, rethinking the way we communicate, and pondering the limits and failures of language.

You see where this is going. I ask Keats how we apply these ideas to our current, increasingly more divisive, cultural moment. There are valid lessons, Keats notes — particularly with regard to, say, talking about and legislating based on climate change with those who don’t believe in it.

“If we assume we’re able to understand our audience completely,” he continues, “I think we are deceiving ourselves.” Keats says that we always have something in common with another entity, whatever it may be, wherever it may be. “It simply is a matter of enlarging the scope of our thinking.”

A project like the Cosmic Welcome Mat “makes one aware of all the ways in which failings in communication can lead to disagreement and facilitate xenophobia,” Keats says. “To recognize limitations of my ability to communicate what I believe, and also to understand what you believe, can be powerful tools toward avoiding misunderstanding.”

Is it tragic or appropriate that, in these times, it takes a thought experiment about how we’d communicate with aliens to consider how we might reach out to our political detractors, or to refugees, or simply to anyone different? The entire year — how long it’s been! — has felt like a torturous exercise in questioning so many assumptions while simultaneously attempting to maintain perspective, skepticism, and energy. I, for one, didn’t expect to see that captured in a welcome mat.