Male frogs are turning female, and it's your lawn's fault 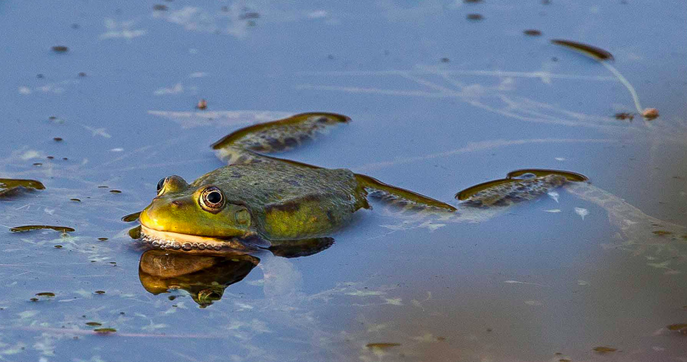 Male frogs are turning female, and it’s your lawn’s fault

Dating is getting a whole lot harder in suburban frog ponds.

In a new study published in the Proceedings of the National Academy of Sciences, researchers David Skelly and Max Lambert sampled hundreds of frogs from Connecticut ponds and found that males are disappearing. And they aren’t just being born at lower rates than females — they’re actually becoming female. Newsweek reports:

Previous work by Skelly’s group found a large percentage of female characteristics in male frogs in these same bodies of water; all 34 ponds examined by Skelly and team turned up males whose testicles also contain eggs. The development of such “intersex” or hermaphroditic traits have been linked to endocrine-disrupting chemicals like the herbicide atrazine. But much of the work in this area has focused on agricultural chemicals. This is one of the first studies to suggest that estrogenic wastes from suburban homes and yards are directly affecting frogs (and perhaps other animals), Skelly says. “This is literally bringing it into our backyards.”

There have been plenty of reports on how endocrine-disrupting drugs like birth control pills get in the water supply and may affect both human and aquatic life — including the feminization of males. But the authors of this study believe it’s not your birth control that’s making frogs girly: It’s your lawn. From Newsweek:

Lambert says that they were surprised to find that estrogenic chemicals from plants may be playing a major part. Compared with forest ponds, he found large quantities of phytoestrogens in suburban water bodies. These chemicals, which can mimic estrogen and affect the sexual development of frogs and other animals (including humans), are produced by plants such as clover and other legumes (soybeans and peanuts, for example). It could be that just by maintaining a lawn and removing native plants from their yards, humans could be impairing the hormonal development of animals.

Now, I know what you’re thinking: Poor lady frogs! How are you supposed to find a boyfriend if all the guys are disappearing? It’s hard enough to be a fly-eater and now you’re telling me there’s a serious dude shortage. Well, lady frogs. I come to you with a message of hope: Life without males could actually be an improvement. Think of a problem real quick. Let’s say … climate change. And who do we have to blame for that? Henry Ford comes to mind. Also the CEOs of oil companies, most politicians, and whoever thought up capitalism in the first place. Basically, a bunch of men. Now, how about the Syrian refugee crisis? Whose fault is that? That would be one Bashar Hafez al-Assad, otherwise known as A MAN. Same thing for dog fighting, deforestation, homelessness, the European debt crisis, and the fact that my street always smells like piss. There’s a dude behind it all. Lady frogs, consider yourselves lucky. Got room in there for one more?