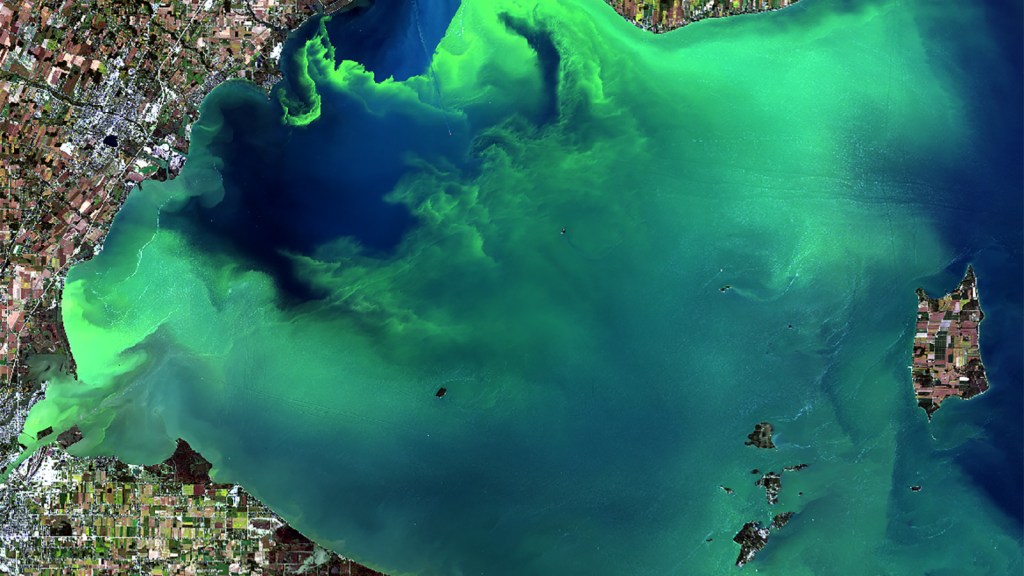 In June, the National Oceanic and Atmospheric Administration projected a Massachusetts-sized dead zone would alight upon the Gulf of Mexico, driven by a vast algae bloom fed by fertilizer runoff from the upper Midwest. As the bloom decays, it sucks oxygen out of the water. As a result, as NOAA puts it, “habitats that would normally be teeming with life become, essentially, biological deserts.”

And on Thursday, NOAA predicted that Lake Erie, which provides drinking water to 11 million people, will also experience a massive harmful algae bloom, starting in late July. The bloom is fed largely by phosphorus runoff in the Maumee River basin in Ohio, where the land is dominated by corn and soybean farms as well as massive indoor hog farms. Phosphorus is a key nutrient for plant growth, and farmers apply it to fields in the form of fertilizer (which comes mainly from phosphate mines in Florida) and hog manure.

Phosphorus-laden fields, meet months of heavy rainstorms. When phosphorus runs off and gathers in Lake Erie, it acts as a kind of superfood for algae. The algae in turn generates microcystin, a toxin that can cause nausea, vomiting, diarrhea, severe headaches, fever, and even liver damage. Back in August 2014, officials in the city of Toledo (population 400,000) had to warn residents for several days not to drink or even bathe babies in their tap water, which had gotten contaminated with microcystin drawn from the lake.

Interestingly, given the relentlessly wet spring, Erie received 24 percent less bio-available phosphorus than would have been expected from near-record flows from the Maumee River into the lake, Laura Johnson, director of the National Center for Water Quality Research at Heidelberg University, told reporters at a NOAA press conference. The full amount would have triggered a potentially much bigger algae bloom. The reason for the shortfall is largely to do with the unusually wet fall that preceded the spring. Massive rains in October and November delayed the corn and soybean harvest, and prevented farmers from making their usual post-harvest fertilizer and manure applications before the ground froze. So the autumn’s climate chaos buffered the effects of the spring’s climate chaos.

It could have been worse, but there’s still likely going to be a massive algae bloom in Lake Erie. As I reported in 2017, there’s “strong evidence (see this 2017 paper by scientists at Tufts University) that climate-related warming trends are helping make harmful algae blooms bigger and more frequent.” In turn, these freshwater blooms emit loads of methane, a greenhouse gas with about 30 times the heat-trapping effect of carbon. The added emissions help warm the climate, which in turn leads to heavier spring rains and more phosphorus to feed future blooms. Rinse, repeat.