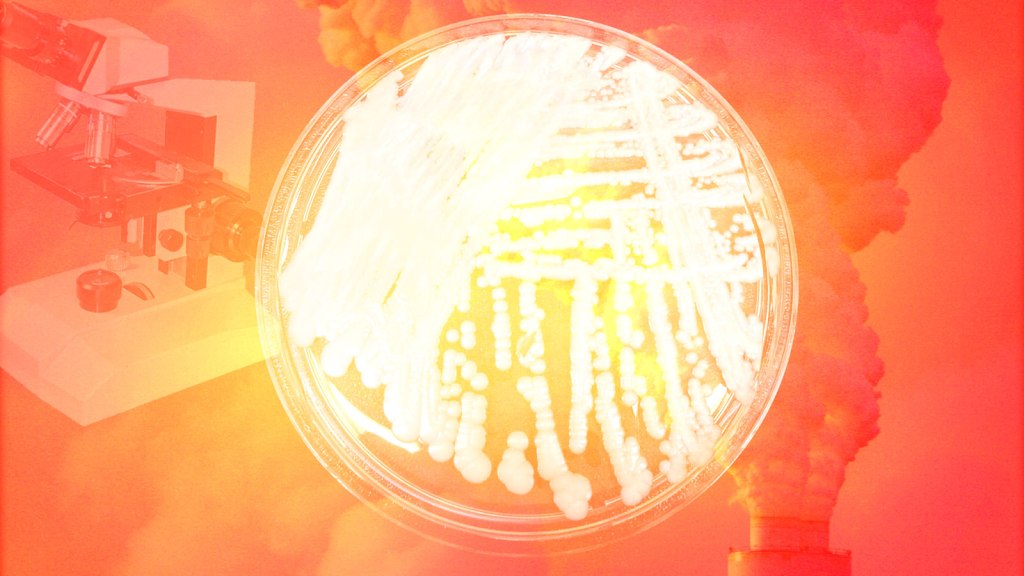 Grist / J.Castro / Getty Images / Shawn Lockhart / CDC via AP
the yeast we can do

In yet another reminder that many of the very serious consequences of climate change are happening NOW, scientists say global warming may have given rise to its first new fungal disease — a multidrug-resistant species called Candida auris.

The deadly menace, which was first identified in 2009, isn’t your typical fungus. It’s been likened to a ‘superbug’ not because it wears a cape, but because it has proved resistant to the main three classes of drug treatment. It typically infects already sick or immunosuppressed people and can spread quickly, particularly in healthcare settings. Studies have shown that C. auris is incredibly hard to root out of the hospital rooms, nursing homes, and patients it colonizes. The fungus can survive on surfaces for weeks and is associated with a human mortality rate of between 30 and 60 percent, according to the Centers for Disease Control and Prevention.

While there are many species of fungus impacted by climate change, the whole infecting humans phenomenon is part of what makes C. auris unusual: Of the millions of species of fungi, only a few hundred cause human disease. Why? Historically, the human body temperature has acted as protection against invasive fungal infections. But, as the authors of the new study theorize, as global temperatures have risen, C. auris evolved to thrive in warmer conditions which happen to mirror the internal temperature of the human body (around 98 degrees Fahrenheit) making us hotbeds — almost literally — for the pathogen.

“[A]s the climate has gotten warmer, some of these organisms, including Candida auris, have adapted to the higher temperature, and as they adapt, they break through human’s protective temperatures,” co-author Dr. Arturo Casadevall, chairman of molecular microbiology and immunology at Johns Hopkins University, told CNN.

The Center for Disease Control has labeled C. auris a “serious global health threat. Since it was first identified in Japan a decade ago, it has been popping up in several far-flung parts of the globe, emerging in five continents and 30 countries. According to CNN, C. auris even appeared simultaneously in countries on three continents with each strain being genetically distinct. As of July 12, there have been a total of 715 cases in 12 states across the United States.

Casadevall warns that while C. auris may be the first fungal disease whose emergence scientists have tied to warming temperatures, it potentially won’t be the last: “Global warming may lead to new fungal diseases that we don’t even know about right now.”