On a recent fall afternoon in the South Bronx, a cadre of high schoolers, teenagers, and community members carefully applied colorful splotches of paint to an empty brick wall overlooking International Community High School. Stroke by stroke, their designs began to form: long, green grass. A blazing yellow sun. And to the side, a pair of towering smokestacks, billowing clouds of thick, black smoke.

The mural, titled “A Path to Choose,” is meant to serve not only as adornment but also as education about climate change and its immediate impact in the South Bronx. The densely populated borough is at a higher risk than other parts of New York City to experience extreme heat waves. The neighborhood is also a hotspot for community action, including several community-led justice efforts. The teens’ mural design reflects both realities — the hope and urgency of a climate-changing world.

“Sometimes when you tell adults things, it’s like they hear you but they’re not listening,” said Jenny Gomez, 18. She’s a Brooklyn native and a youth advisory member for the Climate Museum, a non-profit that partnered with YUCA Arts on the mural project. “If young people can start taking action, why can’t adults?” 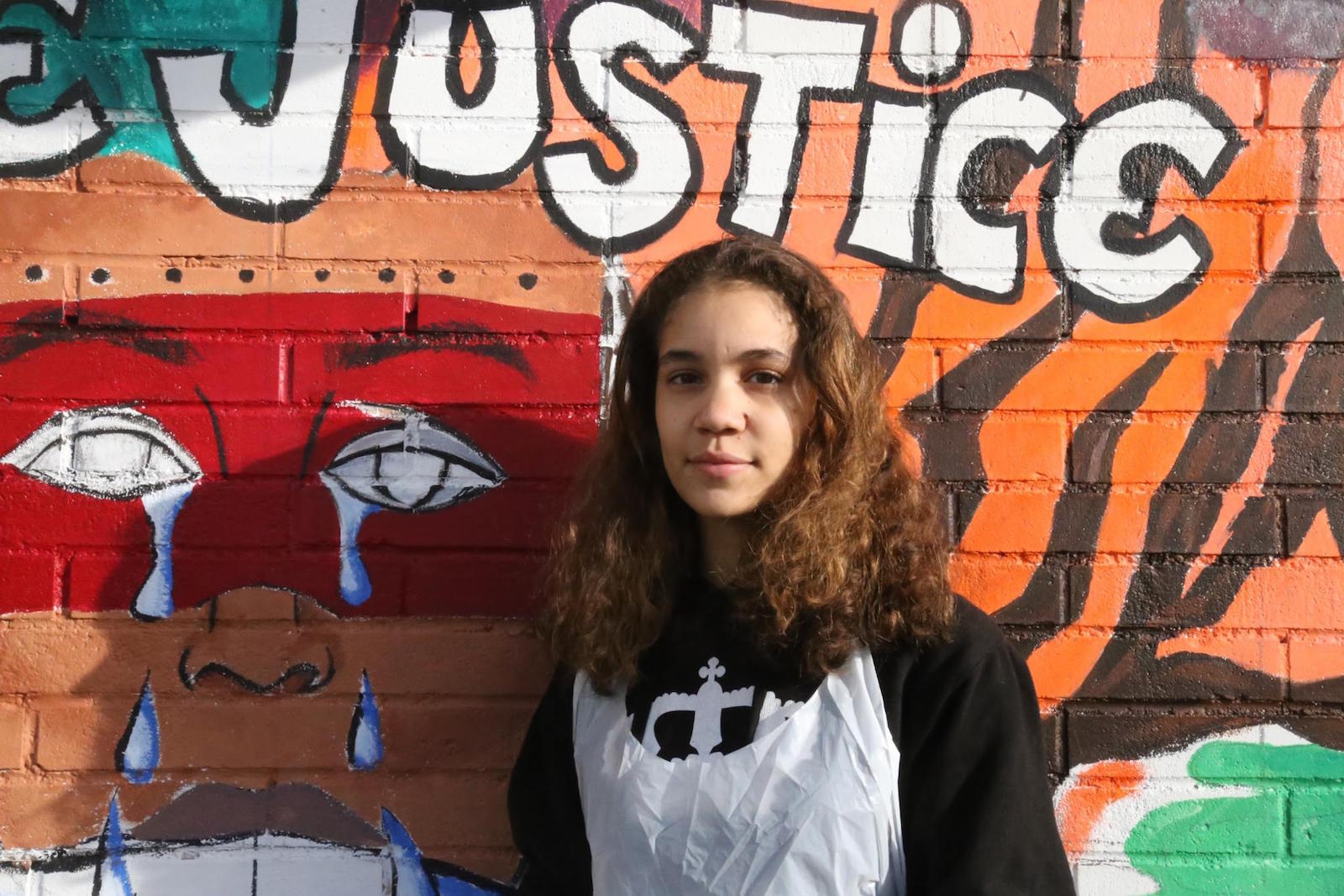 Yorjeny Almonte, 16, 12th grade. “I think some adults think: ‘Oh, they’re young, they don’t know about the world.’ But actually, we talk to each other. We know about what’s going on in the climate and the effects human actions have on climate change.” Grist / Paola Rosa-Aquino 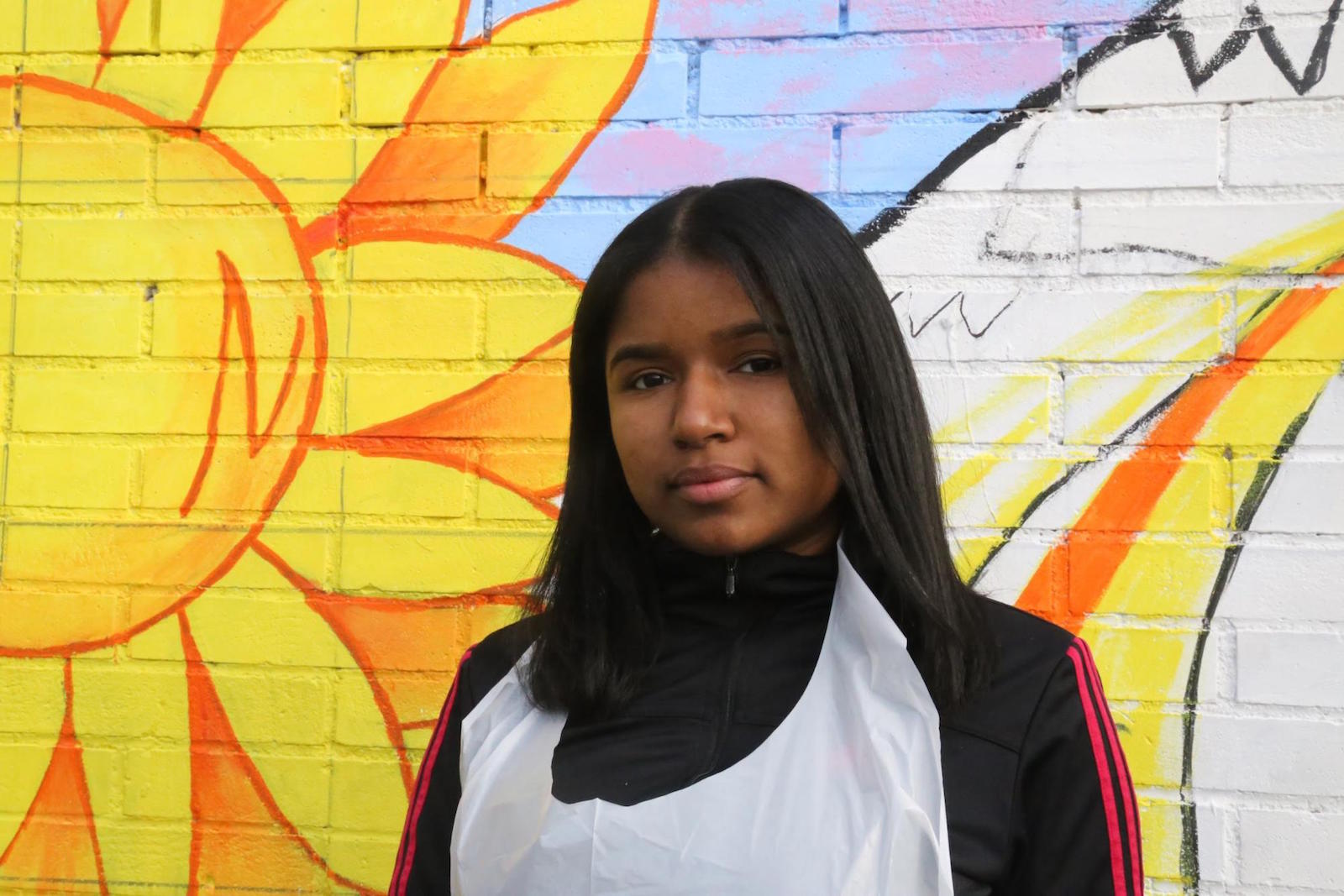 Ismayla Rodriguez, 17. 12th grade. “I hope that for us and for our future, people start being more conscious and paying attention to what they’re doing to the world.” Grist / Paola Rosa-Aquino

The mural painting was the culmination of several weeks of planning by the Climate Museum, and YUCA Arts. The organizations wanted to create an art project around climate justice, and identified a large wall at International Community High School as a potential site. Leaders from the groups held workshops with local young people to educate them about the impacts of climate change. The students sketched out ideas under the guidance of lead artist, Patricia Melodia Lewis.

Lewis hails from Caguas, Puerto Rico. After Hurricane Maria walloped the island, she was displaced from her home. During the workshops leading up to the mural’s design, she told the teens about the suffering she saw in Puerto Rico after the story — people having to endure months of drought due to extreme heat. Lewis wanted the teens to take the lessons she learned from the storm about climate justice (and injustice) to the Bronx.

Lewis says she hopes the new mural and its message will become ingrained in the community. “It’s just a good way to come together and start a conversation,” she said. 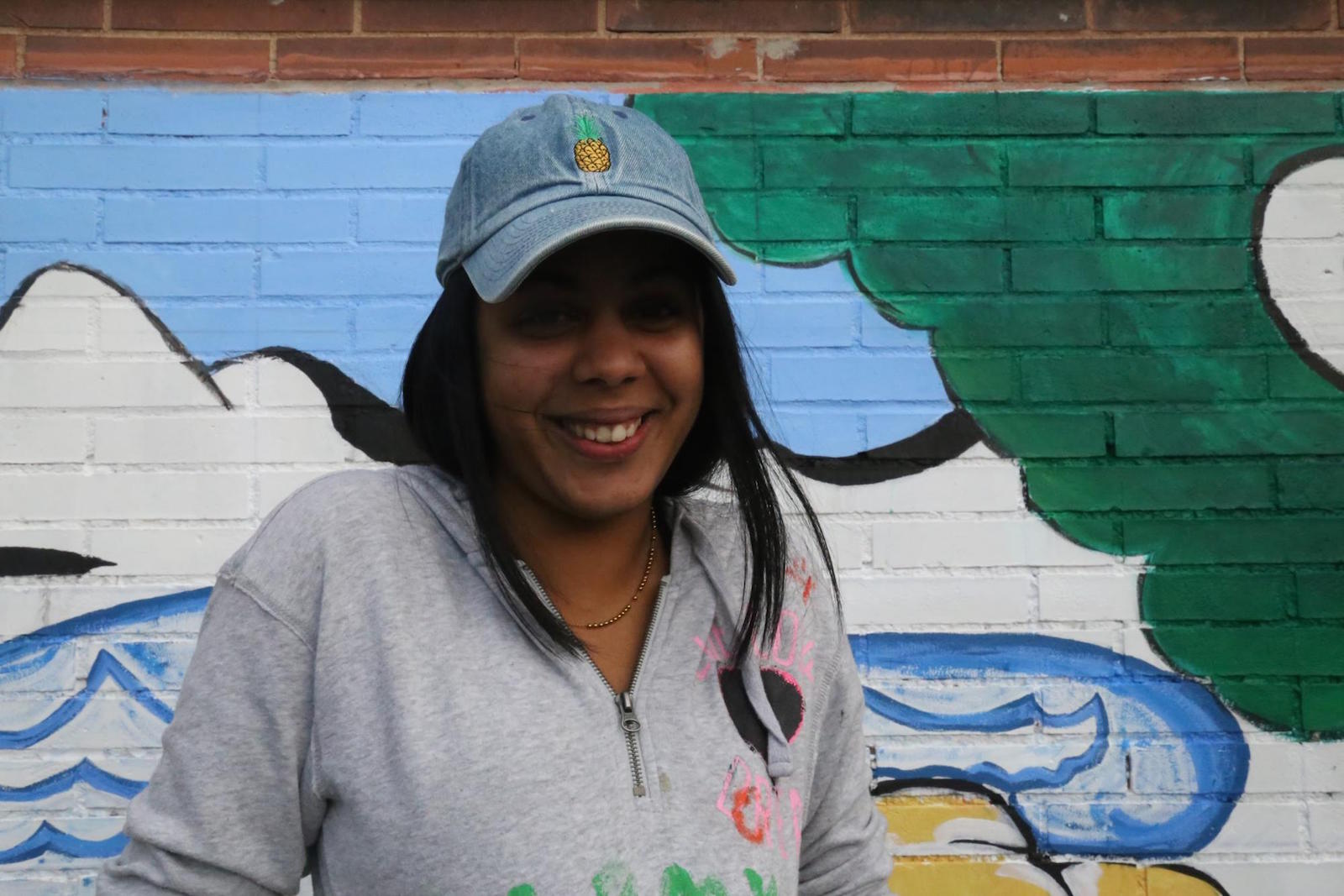 Karina Jiménez, 18, 12th grade. “I’m worried that my children, and generations after, are going to be in a world full of destruction.” Grist / Paola Rosa-Aquino 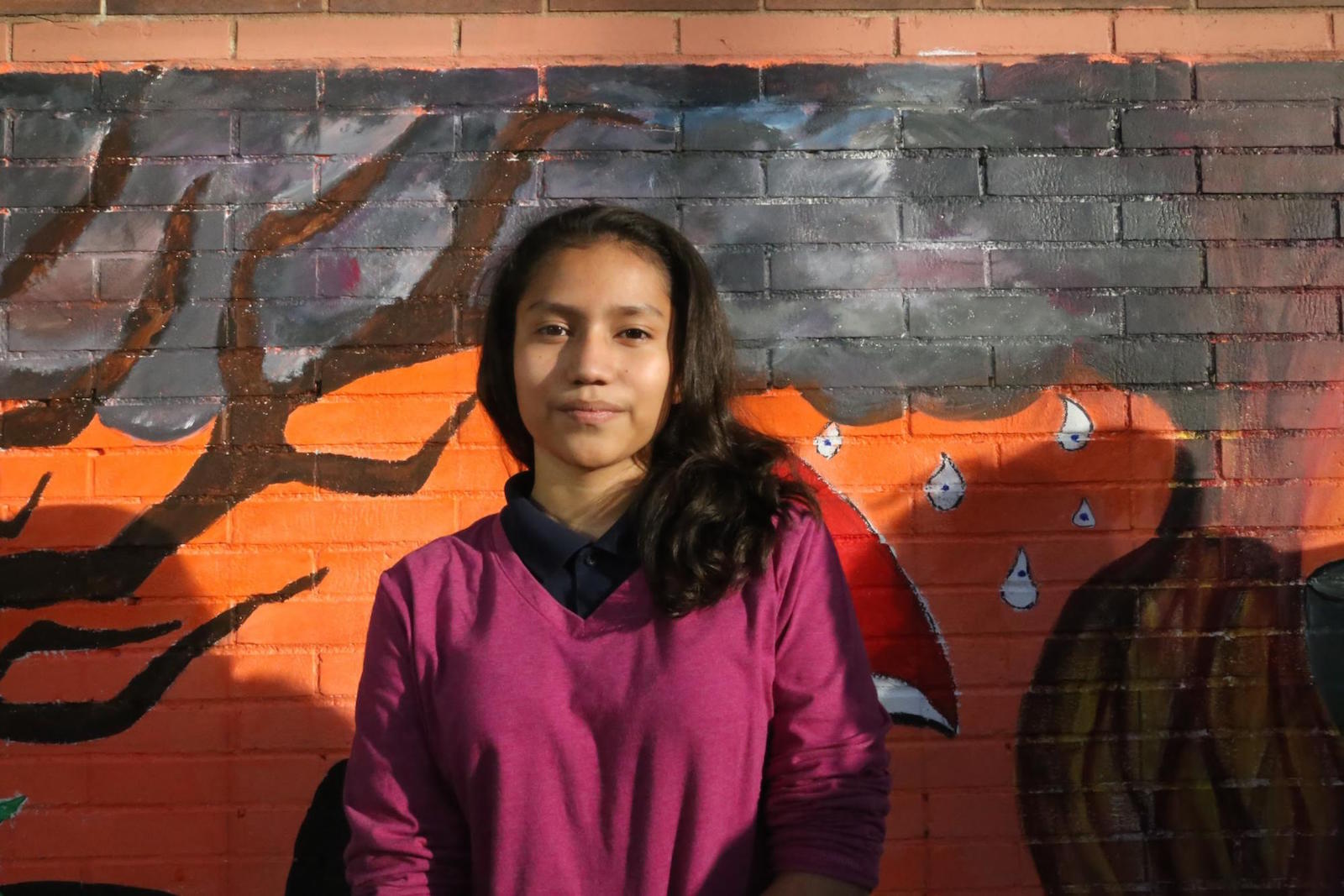 Elda Chavarría, 15, 10th grade. “I think most young people realize that there is a lot of pollution that can be seen and felt around us.” Grist / Paola Rosa-Aquino

Back at the mural, the teens began to paint an ominous hazy sky filled with plumes of black smoke. Before adding a particularly vibrant shade of orange, the students paused to ask Lewis if they’d gotten the blend of color just right. Many of the students partaking in the mural painting hail from Honduras, Puerto Rico, and the Dominican Republic, among others places, but their concern about global climate change unifies them.

Though the subject matter at hand can be grim at times, the atmosphere at the schoolyard was jubilant. The teenagers joked around with each other. They sang along to the dulcet tunes of Juan Luis Guerra and danced along to the steady thump of a drumbeat that echoed across the schoolyard. They adorned the wall with the sun, depicted as a flower with a gradient effect from yellow to orange.

Lewis says the mural is designed by the kids, for the kids. “This is their wall. This is their idea,” she said of the teens’ design. “I’m really proud of them.” 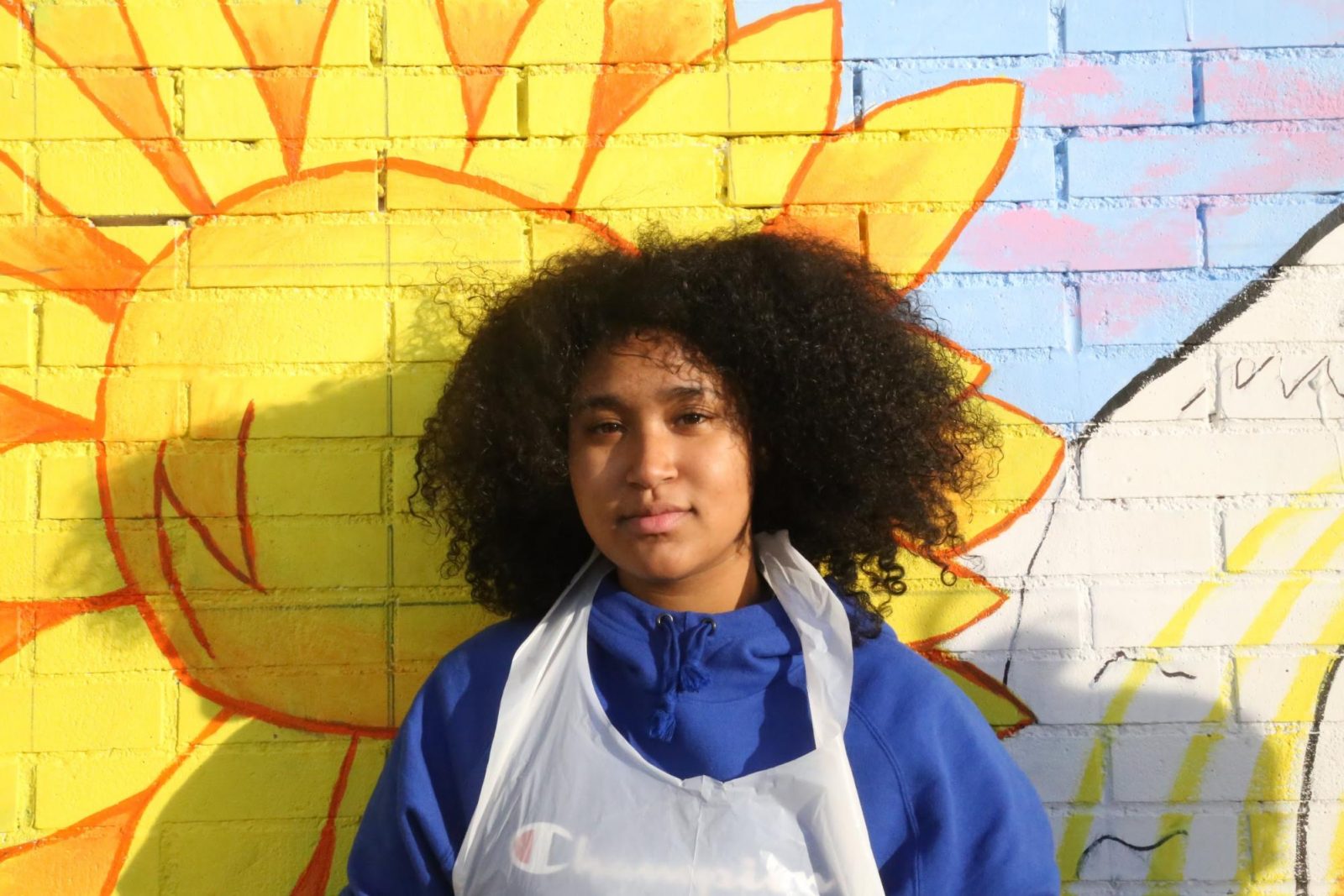 Beatriz Bermudez, 16, 11th grade. “Some young people don’t care. I didn’t care. But if we don’t talk to each other about these things, our future will be affected.” Grist / Paola Rosa-Aquino

At the end of the day, the teen artists stood back to admire their work. The wall itself had been divided into two worlds — on the left, an idyllic landscape with rainbows, lush greenery, rich bodies of water, a single “coquí” (a small, sonorous frog that’s a national symbol for Puerto Rico) among the other flora and fauna. The right side showed a gloomy, toxic, anxiety-riddled and neglected place — a woman crying into a cup emblazoned with an image of New York. In the center of the two scenes, the teens had painted a thin road marked by a sign.

It read, “In a world that’s yours, which path do you choose?”

No vote, no problem. Young people think outside the ballot box.