Nearly all tornadoes are survivable, so why are people still dying? 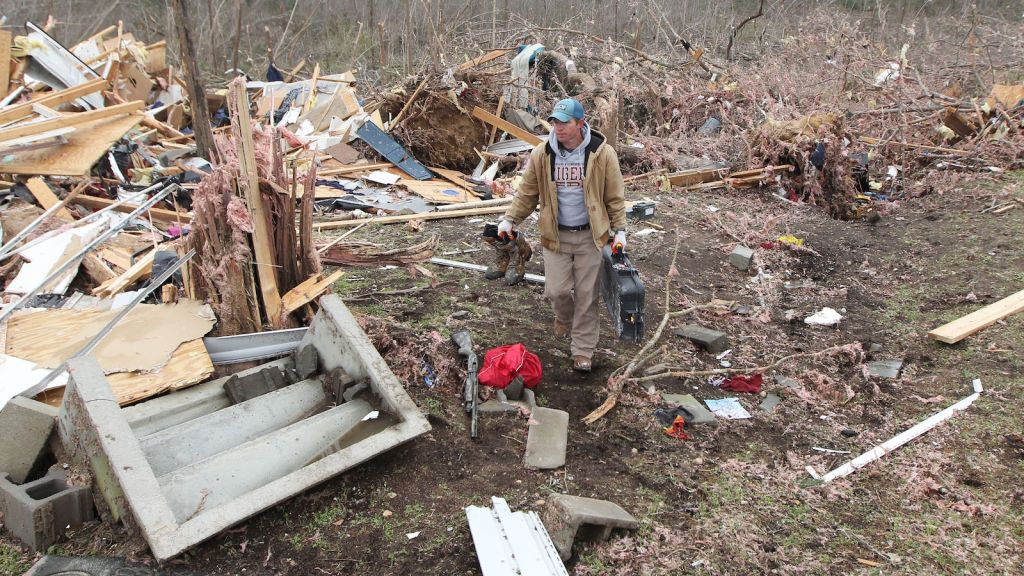 Nearly all tornadoes are survivable, so why are people still dying?

On Sunday, Alabama suffered one of the deadliest tornado outbreaks in its history. At last count, 23 people are dead, with at least seven more missing. The worst tornado began just a few miles from Tuskegee and tore through the entire length of Lee County, smashing mostly rural homes and businesses, before crossing into Georgia. In total, 39 tornadoes were reported across a four-state region.

This isn’t just a weather disaster; it’s a failure of society. Lee County’s per capita income is $22,794, 19 percent live below the poverty line, and 17 percent of houses are mobile homes, nearly three times the national average. Unsafe shelter makes residents much more vulnerable to tornadoes.

Meteorological science has reached a place where nearly all tornadoes are survivable — for those with the means to take shelter underground. Average warning time has skyrocketed from 3 minutes to 14 minutes over the past 40 years — plenty of time to get the warning on your mobile phone (if you have one) and head to your basement (if you have one).

New radar and satellite technology that’s already in place and being developed promises forecasters an even longer heads-up for the strongest and deadliest ones in years to come — potentially doubling lead time to 30 minutes in the near future. Some meteorologists are even working to develop tornado warning systems specifically for mobile home residents. But that extra notice is wasted if you’re unable to do anything about it.

The National Weather Service issued a tornado warning 23 minutes in advance of the storm that hit Lee County on Sunday, and upgraded it to a tornado emergency 10 minutes before it struck. Yet Sunday’s tornadoes killed more people than every tornado in 2017 and 2018 combined.

The South, the poorest region in the country, is increasingly at risk of tornadoes. Climate change is shifting where tornadoes happen, away from the Plains states toward places like Alabama that are much more densely populated. Evidence also shows that although the overall number of tornadoes isn’t changing much, they’re more likely to come all at once — like on Sunday, precipitating chaotic days in which multiple tornadoes targeted the same towns in the span of just a few hours.

But it’s poverty, not changes in the tornadoes themselves, that often decides whether people survive them.

A recent study showed that Alabama has a 350 percent higher chance of having a mobile home hit by a tornado than Kansas. Yes, there are more houses in Alabama, but the state is also one of the poorest places in the entire developed world.

Lee County is at the outer edge of Alabama’s portion of the “Black Belt” region, the heart of Southern poverty. After more than a century of government neglect and exploitation, its poverty levels and poor infrastructure are more similar to impoverished places in Latin America and the Caribbean than the rest of the United States.

In 2017, a United Nations official conducting a two-week investigation on human rights abuses in the United States was shocked at what he saw in rural Alabama’s Black Belt, including yards filled with open sewage and tropical diseases more common in developing countries.

“The idea of human rights is that people have basic dignity and that it’s the role of the government—yes, the government!—to ensure that no one falls below the decent level,” the U.N.’s Philip Alston said in an interview with Newsweek. “Civilized society doesn’t say for people to go and make it on your own and if you can’t, bad luck.”

Alabama’s section of the Black Belt is where you can clearly see the worst transgressions of slavery and institutionalized racism right now. Lee County’s outsized vulnerability to tornadoes is tied to that history. Adapting to climate change will require tackling poverty and racial injustice — including better health care, housing, schools, and child care — especially for those places like Lee County. And it’s still killing folks during extreme weather — no matter how well we’re able to predict it.