Pittsburgh just got the bike advocate it never knew it needed: JuJu Smith-Schuster 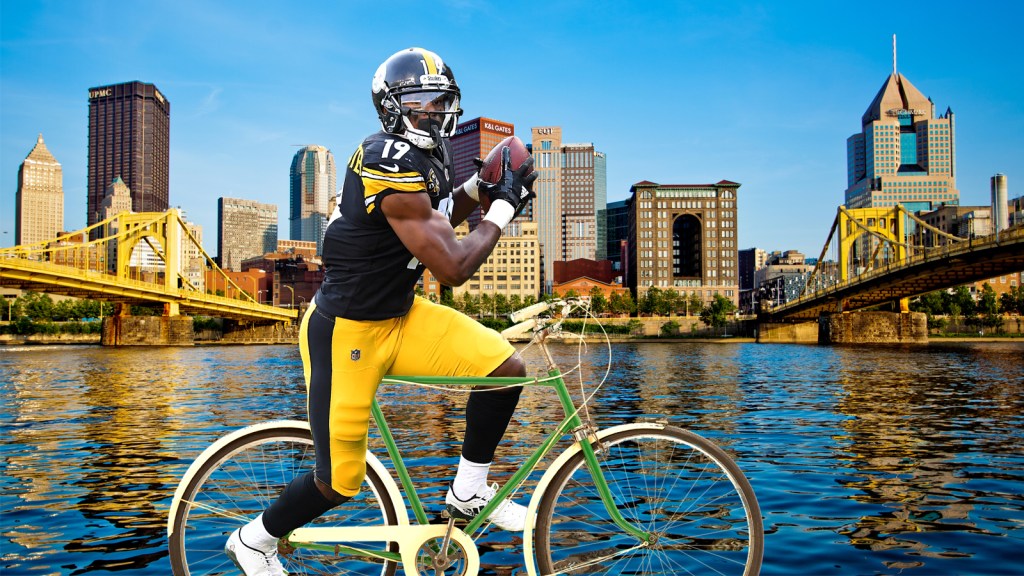 Grist / Getty Images
A Bike, A Tweet, And Those Indifferent Streets

Pittsburgh just got the bike advocate it never knew it needed: JuJu Smith-Schuster

The Pittsburgh Steelers’ 20-year-old wide receiver and AFC Offensive Player of the Week, JuJu Smith-Schuster, is a cyclist. Not of a professional variety — to my knowledge, he would be the first crossover NFL-Tour de France athlete. Rather, Smith-Schuster’s beloved Ghost Square Cross 5 is his primary mode of transportation around the city of Pittsburgh, as he has neither a driver’s license nor car. In his own words: “It’s lit.”

On October 24, when Smith-Schuster awoke to find that bicycle stolen, he immediately put his meticulously crafted and incredibly popular Twitter presence (241,000 followers) to use in resurfacing the bike. He tweeted about the theft itself (8,600 likes, 3,000 RTs); the Drake song most evocative of his feelings about his bike (“Best I Ever Had” — 4,600 likes, 850 RTs); ex-porn star Mia Khalifa’s declared solidarity with the bike-finding cause (232,000 likes, 91,000 RTs); and, finally, the climactic moment when the bike was surrendered to a local police station (54,000 likes, 11,000 RTs).

A month earlier, in more important and certainly more controversial Pittsburgh bike news: the Pittsburgh Bicycle-Pedestrian Coordinator Office tweeted about the painting of a new, long-awaited bike lane on Negley Avenue (36 likes, five RTs). It’s one of three major bike lanes that the city has added in the last couple of months, and a signifier of further changes to come.

In November 2016, Pittsburgh’s City Council passed a Complete Streets Ordinance, which will require all development projects to take into account all modes of transit. Feet! Buses! Cars! Bikes! Over the course of the coming year, the city will be developing a Complete Streets Advisory Committee to actually turn that ordinance into meaningful policy. It’s a more challenging prospect than some might expect.

What the ordinance really means, City of Pittsburgh transportation planner Kristin Saunders explains to me over the phone, is that streets should be safe for everyone — a tenet that no city-dweller would object to.

In 2016, Pittsburgh had the eighth-largest percentage of bike commuters in the country — a club that now includes, of course, Smith-Schuster. That share has more than doubled since 2007, and the organization Bike Pittsburgh at least partially attributes that growth to the city beginning to install bike lanes that year. (Disclosure: The executive director of Bike Pittsburgh is the author’s brother-in-law.) However, bicyclist safety remains an issue — there have been several well-documented fatal crashes in the city in recent years.

But bike lanes are a contentious political issue in the city, as drivers believe they carve much-needed space out of already congested streets. In the leadup to the mayoral primary, Pittsburgh Mayor Bill Peduto rather dramatically stated, “It would be easier for me to budget a UFO landing site than to put in the budget a dedicated bike lane in an area that’s unsafe for both motorists and cyclists.” (Regardless, Peduto was reelected to a second term.)

Saunders says one of the biggest obstacles in building multimodal transit policy is communication. “Every piece of the street is cared about by someone, so a realistic discussion of the trade-offs with community members is always going to be a challenge,” she says. “I think it’s always difficult to talk about public ownership [of space.] That’s a big concept.”

Smith-Schuster, for example, has quite joyfully claimed ownership of the public spaces in his adopted home. That much is clear in Go-Proed videos of him gleefully biking alongside rivers, past stadiums, down city streets. “Mobility is a fundamental right for everyone, and I’d guess he’s trying to make the simplest, most affordable, easiest mobility choice for himself,” says Saunders. “And that happens to be biking. In that way, it’s so straightforward.”

The pending question: Is there any way a widely beloved football star’s enthusiastic endorsement of urban biking can help to change minds about policy? It is not, Saunders says, something that the city has considered. But it’s not unprecedented: The City of Seattle, for example, featured Seahawks defensive end Michael Bennett in a video promoting “Bike to Work Day” after Bennett rode a bike around the end zone to celebrate the Seahawks winning the NFC title in 2015.

Smith-Schuster has made his bike a central and constant part of his delightful public image. It’s sort of the platonic ideal of urban sustainability communications: “This is fun! This is how I get around! And that’s everything I’m saying about it!” Regardless of your feelings about the NFL, millions of eyes are on Smith-Schuster, mostly for a 97-yard touchdown return in Sunday’s game against the Detroit Lions. But as a result, his love for urban biking is reaching an enormous, attentive, and culturally and politically varied audience.

Last Sunday, Smith-Schuster celebrated his record-breaking play by wrapping a chain around the sideline stationary bike. Ostensibly to protect it from thieves? The moment was, of course, posted to his Twitter account with the caption: “Nobody messing with my bike now!” (18,000 likes, 4,200 RTs.)