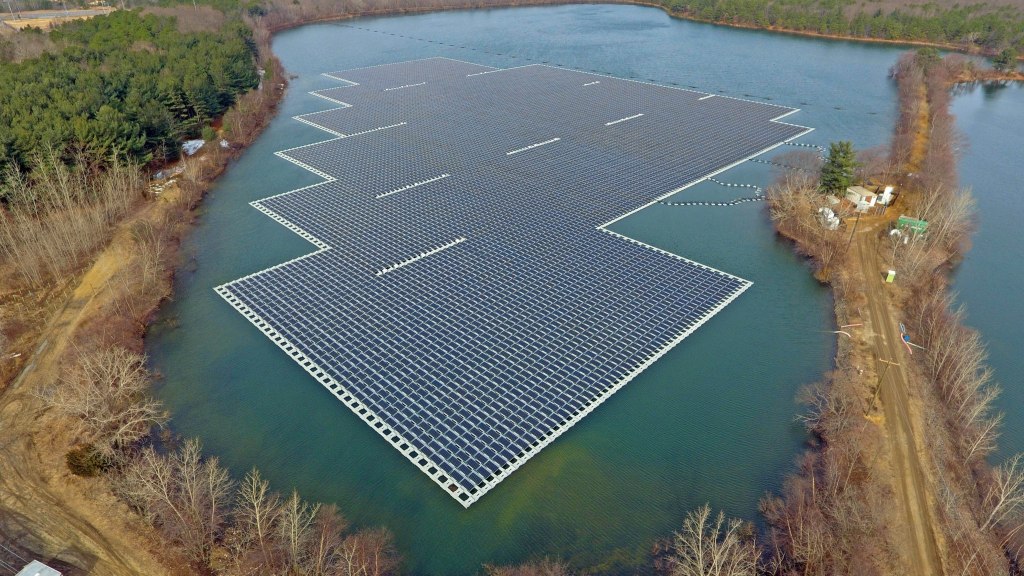 A blue lagoon sits outside of Sayreville, New Jersey, inside a lush preserve of spruce, maple, and oak trees. The 35-acre basin holds some of the town’s water supply, which requires enormous amounts of electricity to pump and treat. A few years ago, local officials decided to install a solar panel array to power the water treatment plant. Only they couldn’t decide where to put it.

Some 400 acres of woodland surround the treatment facility in Sayreville, a suburban town of 43,000 people just south of New York City. To build a solar plant big enough to meet their electricity needs, the town’s water department would need to clear some 15 acres of trees. “That’s not a very green thing to do,” said David Samuel, a consulting engineer for Sayreville who worked on the solar initiative.

Samuel had heard of a novel solar project in California’s Napa Valley, where panels floated atop a vineyard’s irrigation pond. After he visited the site, Sayreville began pursuing its own aquatic array in 2015. The project finished up this October, and the town is now operating a 4.4-megawatt floating solar plant — the largest of its kind in North America. A glimmering blue grid of 12,000 solar panels blankets the lagoon, which draws water from the South River nearby. It’s expected to save the town $1 million in electricity costs over the next 15 years.

“I think it will be a trend-setter, now that people know it can be done successfully,” Samuel said.

Floating solar is a tiny but growing segment in the solar power industry. About 1,100 megawatts’ worth of projects are bobbing in waters worldwide, or less than 1 percent of total global solar installations. Most floating solar arrays are in eastern Asia, where countries have ambitious targets for solar energy but limited land to install panels. The world’s first floating solar array launched in Aichi, Japan, in 2007. The French company Ciel & Terre completed the world’s largest project, a 70-megawatt system, at an abandoned coal mining site in China’s Anhui province earlier this year.

Until recently, the U.S. floating solar market has been slower to develop, largely because the floating systems are still more expensive and less familiar than ground-mounted and rooftop solar projects. Analysts don’t yet have the long-term data to show how floating panels will operate over decades, or how the arrays could affect water quality and natural habitats where they’re installed.

“There are still a lot of uncertainties about how these systems perform in the long run…because it’s just such a new technology,” said Alexandra Aznar, a project leader at the National Renewable Energy Laboratory, or NREL, in Golden, Colorado.

Still, as projects pop up globally, Aznar says she’s hearing more from state and local governments, utility companies, and federal agencies interested in putting panels on otherwise unused surfaces. All told, NREL estimates that there are 24,000 artificial lakes, ponds, and reservoirs that could host floating solar panels across the mainland United States. Combined, those projects hold the potential to produce enough solar power to equal almost 10 percent of the country’s annual electricity output.

In Sayreville, the $7.2 million floating solar array resembles a zig-zag puzzle piece. Its solar panels are the same as those used in land-based projects. But instead of traditional metal racks and mounts, these panels are affixed to hollow plastic floats, which lock together like Lego pieces to form a raft. The equipment is designed to withstand strong winds and waves, as well as damage from the sun’s ultraviolet light.

Power cables connect the solar array to equipment onshore, delivering electricity directly to the water treatment plant. If the solar panels produce more electricity than needed, the excess goes to the local grid. On dim or cloudy days, the water treatment plant can still draw power from the grid to keep operating. Through a New Jersey solar incentive program, the floating panels also earn financial credits for every kilowatt-hour of electricity produced.

Among the biggest challenges with floating solar projects (besides piles of bird droppings) is ensuring the panels don’t drift too much in the water. Anchoring the Sayreville project was particularly tricky, because of the long distance between the array and one of the reservoir’s banks, said Chris Bartle, the U.S. business development manager for Ciel & Terre, which designed the floating structure used in Sayreville. To make it work, engineers ran a cable parallel to the north edge of the array, then tied the moorings to that line.

“There’s always growing pains, technology hurdles to overcome,” Bartle said. The company, which has built 350 megawatts in floating solar projects worldwide, is working on a 1.8-megawatt project in California along with smaller arrays in Florida and New Jersey.

Aznar said that more data is needed to determine how and whether such “co-benefits” will actually pan out over time. If researchers can quantify these advantages, it could help towns and developers justify paying more to put solar panels on water instead of on the ground or buildings, she added. Farmers in drought-prone California, for instance, might be willing to install costly arrays on irrigation ponds if they could keep water supplies from evaporating in the heat. According to NREL, many possible U.S. floating solar sites are in water-stressed areas where utility prices are high and land is expensive.

For developers like Ciel & Terre, municipal reservoirs and agricultural ponds are an obvious place to begin deploying floating solar, because these projects wind up being relatively small and close to existing electricity lines, Bartle said. The company wants to build on much bigger bodies of water — large quarry lakes, tailing ponds, hydropower dams — that could hold dozens or hundreds of megawatts’ worth of floating solar panels.

“The biggest hurdle so far in the United States has been the fear of being first,” Bartle said. With Sayreville’s arrays and others arrays launching stateside, “I think we’re going to see many more.”