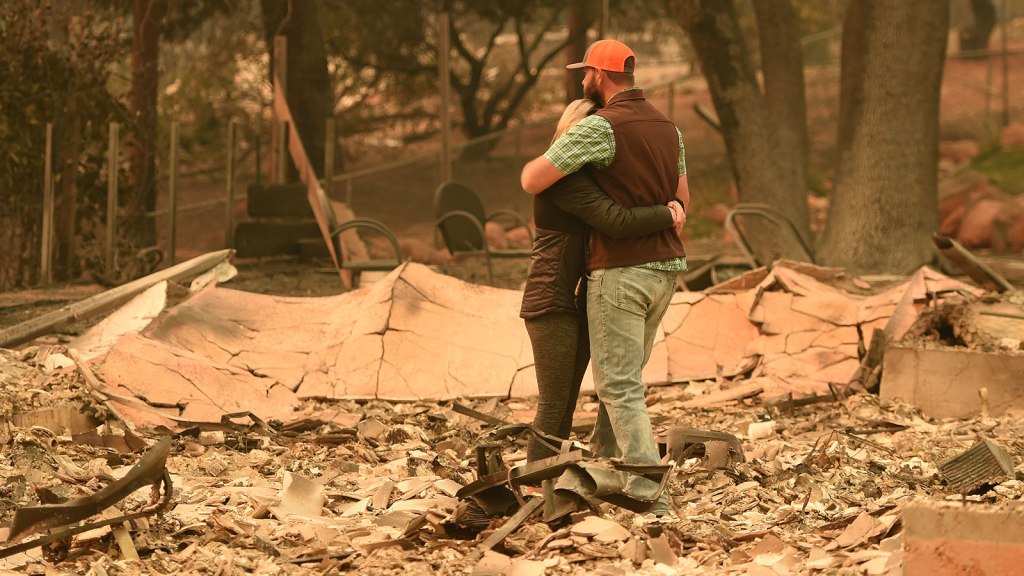 The Camp Fire has torn a scar across Northern California, doing the majority of its damage within the first six hours after it formed last Thursday. It’s now the deadliest, most destructive wildfire in state history and as of Tuesday night has claimed 48 lives.

The fire was a shock to the people of Paradise, the mid-sized town that it very nearly destroyed entirely. Soon after the fire began, stories from survivors fleeing the flames began to filter out through local and social media.

Journalists on the ground reported sentiments of heartbreak and hope, tales of families torn apart, and the occasionally happy news of pets reunited with their owners. They heard stories of heroism — doctors huddled on the hospital’s helipad, waiting to airlift patients to safety.

Below are some of the striking moments from the early days of the fire:

This man on the right is walking towards the #CampFire to look for his wife and daughter who live in Paradise. He said he hasn't been able to reach them for the past two hours. pic.twitter.com/vMznHgiSat

A very eye-opening interview with a Paradise evacuee who describes the scene of the #CampFire @ActionNewsNow pic.twitter.com/E4ncB41srZ

On Friday morning, images emerged that suggested that much of Paradise had been lost. The fire was so intense and the destruction so complete that the town’s reservoir ran dry after its waters leaked through miles of damaged pipes.

#BREAKING We have arrived in downtown #Paradise and I’m so sorry to report…much of the town has been lost, along with hundreds of homes. #abc7now #campfireparadise pic.twitter.com/aYXuU4qkVs

#DEVELOPING The sight of these cars—the clear chaos and panic of the drivers as they tried to escape the #Campfire—is jaw-dropping. A school bus among them. How did these people get out? Can’t imagine the terror as they ran for their lives. #paradise #abc7now pic.twitter.com/MlAsASxq2j

Paradise residents worried about what happened to the local hospital as pictures surfaced of patients waiting on the tarmac to be airlifted out. A TV news crew from nearby Redding captured eerie footage of what was left of Feather River Hospital:

WATCH: KRCR News Channel 7's Meaghan Mackey shows us what is left of Feather River Hospital in Paradise and what was left on the helipad as everyone worked to evacuate due to the #CampFire.

The burnt shells of cars and overwhelming loss of homes was an indication that many of Paradise’s residents likely didn’t survive the blaze. In addition to the nearly 50 deaths caused by the Camp Fire, hundreds are still missing. There was a man who saved himself by jumping into a nearby stream — but couldn’t save his friends. Family members pleaded with loved ones to get out — after a while, those remaining in Paradise didn’t pick up.

But as the weekend progressed, heroic stories of people rescuing neighbors and pets began to mix with the reports of destruction.

Amidst the devastation, there are countless heroes including this Paradise resident who picked up her 97-year-old neighbor, Albert, and drove him to an evac center. Albert was sleeping and didn't hear about the #CampFire until his neighbor woke him up. pic.twitter.com/yJpzx0LkLd

Here's the crazy story of just one of the many heroes in Paradise, the town destroyed by California's deadliest fire ever. His name is Allyn Pierce, and he's the badass nurse who drove this truck through the flames. pic.twitter.com/xAL7zRf34H

As I was getting into Paradise this morning I came across a firefighter who found an injured cat. He was holding tightly onto the cat while animal control arrived. #CampFire @abc7newsbayarea #abc7now pic.twitter.com/qtX7tWpAcM

There is a group of cowboys rushing around Paradise saving animals. I watched as they went to a home leveled in #CampFire not knowing what to expect. Huddled together were eight horses, two with burns. They loaded them, drove outside fire barricades to the grateful owner pic.twitter.com/S3jePqKFlD

Reporters were clearly impacted by covering the devastation. Trained to be dispassionate observers, they embraced survivors and paused for personal reflections. Over and over, they made it clear that this kind of fire isn’t normal. As California’s fire season lengthens and droughts become more frequent and severe with climate change, the chances of megafires, like the Camp Fire, are going up.

The figures for the #CampFire are disturbing. But it also *feels* different. It’s 46 degrees in Chico — normally around 70 — and its lunchtime, but the sky is completely dark. The birds are freaking out in the sky. Like some weird nuclear winter.

I still can’t get over how weird it is to cover a fire when you’re scraping frost off your windshield in the morning and putting on long johns under your Nomex. #campfire

As area residents grapple with its loss, it’s unclear what happens next. Donated goods have poured in, and neighbors have sought one another out to share stories and rebuild their community. The hope is that the reports of structures that were miraculously spared and other examples of resilience and kindness will help Paradise heal.

Clothes, blankets, shoes, diapers, and other donations have poured in. @ABC10 pic.twitter.com/wiZM7TPS7o

Watch as a volunteer fire captain becomes emotional when he discovers his childhood church has been spared by the flames of the #CampFire pic.twitter.com/622tJvbKPk

I spent the evening at the Nazarene Church in Oroville and met this Paradise man who lost his home. He had a guitar with him and I asked him why he was walking around with it. He said he was hoping he could play a few tunes, make other evacuees happy with his music. #CampFire pic.twitter.com/mIXC8CkWJV