Darlene Wilkens’ branch of Spartan Insurance had flooded before, but never like this. A year ago, as she watched horrifying coverage of Hurricane Harvey from home, she realized her office in Meyerland, a low-lying part of Houston that seems to always get hit, was probably already ruined.

Wilkens, the branch manager, drove to her office a week later to find her refrigerator lying sideways in a backroom. Her file cabinets were full of “nasty” water. “It was pretty much total chaos,” she says. She lost everything except computers and some important files she’d stored high off the ground.

For three months, she worked from her house in northwest Houston where things were drier, trying to run the office remotely. She had tons of work. “There were lots of claims being called in,” she says.

As annoying and scary as Harvey was, she considers herself lucky: “It wasn’t that bad compared to people who keep losing their homes.”

In Houston, losing one’s home is becoming an all too familiar experience. Harvey dumped up to 51 inches of rain on the city during half a week, inundating more than 100,000 homes in what was the worst rainfall event in U.S. history. Then this past July 4th, 8 inches of rain fell on Houston, swamping streets, stranding unlucky motorists, and nixing the city’s Fourth of July party. By local standards, it was just a summer rainstorm.

On a Wednesday in early August, it is pouring again. Wilkens cracks open her office door and eyes the rain anxiously. “Hopefully we don’t flood,” she says. 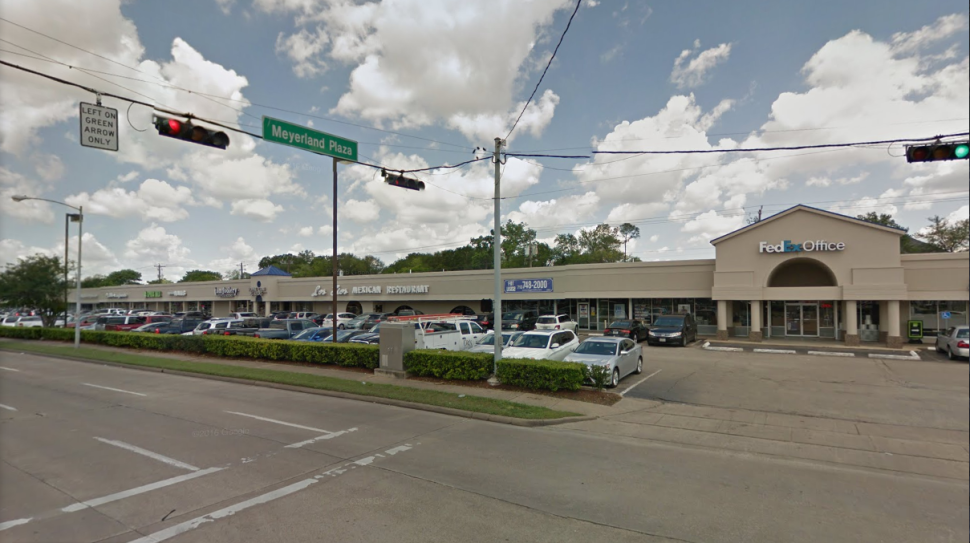 Chances are there will be flooding — if not at her office, at some other unlucky soul’s house or business nearby. Meyerland, an upper-middle class neighborhood along Brays Bayou in inner southwest Houston, is almost entirely in the 100-year flood plain. Technically, that means it is supposed to have a 1 percent chance of flooding each year. Those numbers might sound reassuring, but recent history suggests they are not.

Houston has had at least three property-wrecking floods in the past four years. Of course, there was Harvey. The other two, in 2015 and 2016, weren’t storms severe enough to have a category assigned to them — but they also engulfed homes and businesses in low-lying Meyerland.

People here are already living the reality that communities across the country, from fire-prone neighborhoods in California to low-lying subdivisions in coastal Florida, are also facing. Not long ago, Meyerland’s 1-percent-per-year chance of flooding felt like a remote possibility. Now, as climate change ramps up storms and raises the waterline, this vulnerable neighborhood seems increasingly at risk. Mitigation projects like the ones funded by a $2.5 billion bond, expected to pass on Saturday, the one-year anniversary of Harvey’s arrival in Houston, may not be able to keep pace.

In response to the new reality, some people are leaving the neighborhood. The average home price has dropped from $395,000 in July 2017 to $347,000 a year later, according to real-estate website Zillow. Similar but less flood-prone neighborhoods haven’t seen the same drop.

But the reality is that Meyerland is still a great place to live. It’s cozy, affluent, and conveniently located, a short drive from Chinatown, Downtown, and the Museum District. So many people, like the majority of the business owners and workers in this Meyerland strip mall, are staying put.

Those holding on seem increasingly resigned to a future of incessant flooding, and they have learned to rely on their own inventions and workarounds rather than waiting for the city and Harris County to bail them out. Wilkens and her fellow businesspeople live in a dual reality: With no guarantee of a drier future, these owners and employees are trying to stay optimistic — while also preparing to flood again.

Thanks to its location on the Gulf coast and the high humidity that comes with it, Houston has always been prone to heavy rains. In most cases they have been just an annoyance.

Climate change is making the freaky outlier storms worse — and less predictable. Storms dumping 20-plus inches of rain are six times more likely than they were in the late 20th century, according to the National Academy of Sciences. On top of that, development has replaced wetlands and prairies with concrete, so stormwater goes into homes rather than sinking into the ground. According to the local nonprofit Katy Prairie Conservancy, Houston has lost 70 percent of its wetlands since 1992.

Flood maps produced by the Federal Emergency Management Agency and local agencies like the Harris County Flood Control District are supposed to help people make smart decisions about where to live or where to open a business. But they might be less useful if megastorms become more common. According to one survey along Armand Bayou, southeast of the city, the maps failed to predict 75 percent of flood claims from five recent floods.

Besides, existing business owners like the ones in the Meyerland strip mall have already put down roots. Many of them have spent years building up a local customer base. 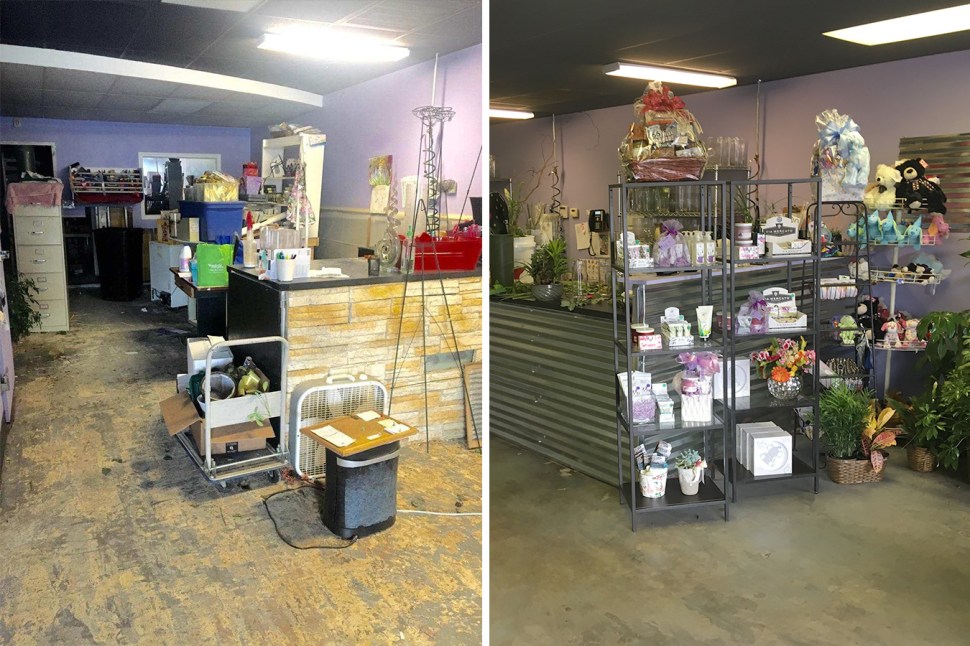 “I’d probably retire before I move,” says Elaine Ousley-Nevarez, owner of Elaine’s Florist and Gift Baskets and a native Houstonian. Even though she had a significant loss of overall sales after Harvey, the storm actually brought in some new business. There was a surge of flower sales, as people sent condolences and thank-yous.

Ousley-Nevarez visited Europe last fall. She shows me a picture she took of a flood gauge on an old wall in a town near the border of Germany and Austria. The worst flood it had recorded was in 1501, she notes before pivoting to her point: “Flooding has been going on forever,” she says. “It is what it is. You can’t change it.”

The Harris County Flood Control District is not so fatalistic. It is trying to protect the fourth-biggest city in the United States by adding wetlands and prairies to soak up the water, and improving infrastructure like bayous and levees that can direct and control its flow. For decades, the district has been working to widen Brays Bayou in the hopes of carrying water more quickly out to the Gulf of Mexico. Lately, workers have been dredging and expanding a portion on the southern edge of Meyerland, turning an already-large artificial river into a gigantic one.

But as far as residents and business owners are concerned, Meyerland will be swamped again. It’s just a matter of when, and how bad.

“Honestly, I don’t care how wide they make [Brays Bayou] down here,” Ousley-Nevarez says. “We will still have problems.”

Reconciled to a future of floods, business owners in this little strip mall are coming up with their own ways to manage the risk. The local Game Stop, for instance, formerly relied on pallets to keep its merchandise above water during minor inundations. That’s no longer enough. Now, the store stocks sandbags in the hopes of stopping the waters.

At Los Tios restaurant a few doors down, the waters rose so fast during Harvey that employees were marooned overnight inside the popular Tex-Mex eatery. Los Tios took in more than two feet of water and closed for four months. 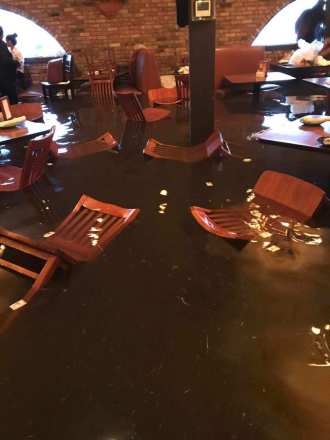 “Four months is almost fast,” says manager Elias DeOssio. “There are people who aren’t back in their homes yet.”

When it poured this year on July 4, DeOssio feared the worst, he says: “I started to really think, are we going to have a relapse?” Even if nothing disastrous happens, sales drop off as the rains keep customers at home.

Houston TranStar, the local transportation agency, announced in July it would start tracking and sharing real-time road-flooding data. The city’s streets are actually designed to flood as a last layer of infrastructure defense. The idea is that it’s better to soak cars than homes.

DeOssio already has his own system to track possible road flooding. He watches the water levels at the edge of the strip mall, where two roads meet at a low point, as an indicator of how bad it will be in the neighborhood. He also has his own damage-control plan: If it looks really stormy, he parks his 2004 Nissan Titan pickup truck on higher ground at a local school and walks half a mile in the rain to the restaurant.

“It’s wet, muddy, and you never know what critters are crawling around, trying to get out of the water,” he says, describing the conditions during a flood. Still, he says Los Tios has no plans to leave Meyerland anytime soon: “There are customers who have been with us for 50 years.”

Ousley-Nevarez, the florist, also has her own mitigation plan. She left her floors as bare concrete, so that the next time the waters rise the cleanup won’t be so difficult. She replaced her ruined wooden shelves with metal ones. She put her commercial fridge on wheels to make it easier to evacuate. As was the case with Darlene Wilkens, Ousley-Nevarez also found her fridge lying sideways in water once Harvey passed.

Ousley-Nevarez expects flood waters to come for her store again, just hopefully not at the level they did during Harvey. “We knew were going to flood,” she says of that storm. “We didn’t anticipate the amount.”

On the August Wednesday, that I visit the Meyerland stripmall, the threatening rain remains just a threat. There was brieflysome water in the streets, but for today, none in her flower shop.

Like the other businesspeople in this strip mall, Ousley-Nevarez hopes that last year’s storm was a fluke, a one-time thing. She tries not to worry unless a really big storm is coming in. But when it does — and in this part of Houston, it’s more a question of when than if — she, her metal shelves, and her concrete floor will be ready for it.