Early one Sunday morning in August, as the sun climbs to a blaze in the aqua sky, an organic market unfolds across the park Placita Roosevelt in San Juan, Puerto Rico. Vendors and farmers from all over the island gather to share produce, expertise, and services. Chicks for sale cheep sleepily in their corner of the plaza, nestled in cages adorned with informational pamphlets on chicken care. Tabletops pop with piles of organic green beans, purple beets, and red chili peppers.

This is the largest organic market in Puerto Rico, created by the Cooperativa Orgánica Madre Tierra (The Organic Mother Earth Cooperative), a worker-owned social enterprise based in the island’s capital city. Every vendor in this plaza, and most of the customers, are members of the cooperative.

In the wake of the massive blows delivered by last year’s hurricanes, Irma and Maria, the latter of which killed an estimated 2,975 people in Puerto Rico, the market—and the coop—provided some of the crucial moral and financial support that small organic farmers so desperately needed. In the process, it created one model of how Puerto Ricans can move forward into a future that will likely see destructive storms strike again and again.

Irma and Maria devastated Puerto Rico’s food infrastructure. Supermarkets carried very limited stock due to an extended island-wide blackout. Government and aid group distribution of meals was slow–according to one report, an estimated 10,000 crates of food, water and medical supplies were still stuck at the Port of San Juan a week after Maria. Staple products grown on the island, like plantains, papaya, and pigeon peas, were almost entirely wiped out.

Many farms, if they survived at all, lost most of their crops, amounting to a loss of about $780 million dollars in agricultural produce across the island. “When I went to the grocery store, it was scary because you could tell that they didn’t have enough and they were just rearranging the shelves to look like they had stuff,” says Elena Biamón, co-owner of the organic farm Finca Gripiñas in Jayuya, two hours southwest of San Juan.

The coop’s market also sustained losses. One Sunday session was cancelled, and just 16 farmers and vendors attended the first market following Maria (compared to the usual 45 to 50 tables). But by this past summer, between 25 and 30 vendors were regularly attending the market again.

The Cooperativa Orgánica Madre Tierra , founded in 2001, has a mission to promote healthy living through agroecology, which applies the principles of ecology to farming. It is directed by Manuel Bey, an expert on coop models who studied social science at the University of Puerto Rico. Today, its 150 member-owners include consumers, farmers, chefs, and health practitioners, each of whom purchase at least $200 worth of shares to join. In return, they get free educational workshops, discounts on produce and services, and a vote in decision-making processes. For an extra $25 per Sunday market, members get a guaranteed spot at Placita Roosevelt. 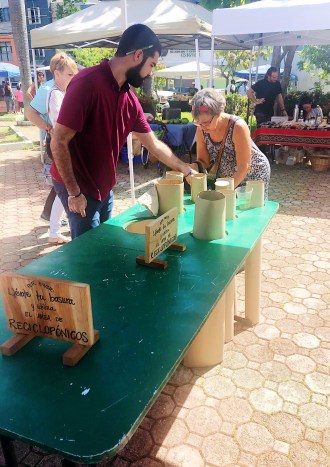 The idea of agroecology goes one step beyond organic; the concept is to integrate the local ecology of a region into the natural farm system and preserve the surrounding biodiversity, including trees, indigenous plants, and insects. For member Biamón, who regularly teaches workshops on agroecology at the market, this means not simply avoiding the use of pesticides on crops and working toward a wide-ranging mix of flora on the farm, but also contributing to community through education and giving shoppers a fair price. Biamòn, who with her husband successfully converted Finca Gripiñas into the first certified organic coffee producer on the island, relied on native trees to provide shade for her coffee plants. Before the hurricane, she says, “It was like a little forest.”

Following last year’s storms, the cooperative provided farmers with teams of volunteers to clear debris and restore property, as well as funding to recover from the damage. In collaboration with other agricultural groups on the island, Bey helped with a crowdfunding campaign to raise almost $500,000 through an initiative created by the agro-tourism organization Visit Rico. The Regrow Puerto Rico Fund was distributed in the form of $4,500 stipends for 100 affected farms. More than a dozen volunteers travelled to most of the coop’s associated farms and helped with the restoration process, from clearing fallen trees that had blocked roadways to preparing and planting new seed beds.

At a time when resources were scarce, it was a relief for farmers who fared the worst. “It helped,” says Rosado. Because of the extensive damage to his farm’s soil and infrastructure, Rosado relocated his farm from the southern town of Patillas to Isabela, in the island’s northwest corner. Coop volunteers helped him and his team with clearing and finally planting the new location in May of this year.

“We definitely lost a lot in the hurricane, but we also gained a lot of knowledge and reinforcements and good energy from people,” Rosado says. With money from crowdfunding and from initiatives like Regrow Puerto Rico, his farm also provided seed packages to other farms in need.

The market creates “an environment of cooperation and friendship,” says Josué Rivera, Puerto Rico state director for rural development at the United States Department of Agriculture, which provides financial and business support to farmers. He says that, in the past, the island had a strong agricultural sector. Projects like these can restore some of that legacy and culture.

“If you don’t have a community of people that comes together to regrow and build a more resilient place to live, we will never be Puerto Rico again,” Rivera adds. “And with places like the coop you have that spirit.”

The cooperative plans to open an organic grocery store and café soon, so that farmers can sell their products seven days a week. A store can also foster community preparedness, Bey suggests, by providing a meeting location, as well as fresh food that may not otherwise be available in the aftermath of a crisis.

People on the island are realistic about the future — they recognize that it’s just a matter of time until the next storm hits. In an era of increasingly powerful hurricanes, the path created by the coop offers hope for preparedness and security in tough times.