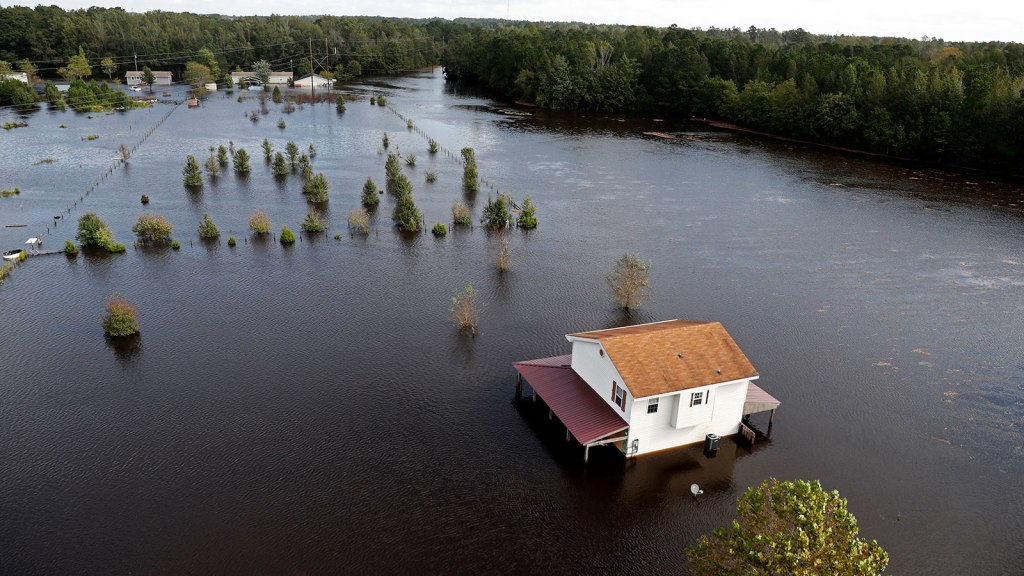 Hurricane Florence made landfall in the poorest portion of one of the poorest parts in the country: the Carolinas. It was the heaviest rainstorm in East Coast history, and the resulting floodwaters forced tens of thousands from their homes.

Florence’s worst rains fell in Bladen County in southeastern North Carolina, a place which now holds the all-time rainfall record from an East Coast hurricane. The average person in the county makes less than $18,000 per year, two-thirds of the U.S. average, and only one percent of homeowners have flood insurance. In Lumberton, where the local river rose so high it overtopped the water gauge, a post-storm survey showed that 80 percent of residents “could not evacuate because they did not have the means to do so.”

Hundreds of people have been rescued in the county, and dozens of roads and highways remain underwater.

All of this is harrowing enough. But it’s what will happen after the waters recede that has people most worried. Judging from the example of other recent storms like Florence, many of those displaced will never return home.

Florence’s long-term impact won’t fall on North Carolinians equally. Many in the storm’s path were lucky enough to evacuate, but others had no way out. For many of those who stayed, the consequences will be life-altering. They may eventually leave their homes, too, forced by Florence to relocate and reinvent themselves.

“No one who decides to leave after Florence will consider it to have been entirely voluntary,” says Jessica Whitehead, a meteorologist and coastal adaptation specialist at the North Carolina Sea Grant, an organization that provides science-based education to coastal communities.

Whitehead says her colleagues are working to address equity issues when it comes to planning for climate change, but that work is difficult. “I do not expect to find a single best practice that fits all places, but a suite of best practices may be possible,” she explains. “This is future work for the field; it does not yet exist.”

It costs families hundreds or even thousands of dollars to evacuate. Those expenses are the direct costs of climate change as well as previous local planning decisions — bigger storms hitting more homes built in harm’s way result in escalating recovery bills. And when disasters strike, they magnify already existing economic inequality.

That hurricanes make poverty worse is not a new story. More powerful storms should force us to rethink what we’re doing to help those most vulnerable to the ravages of climate change. But that’s a challenge when we’re focused on recovery efforts.

“Considering this long-term issue during a disaster response is next to impossible when people are getting rescued from homes and mold is creeping up the walls,” Whitehead says.

To even embark on making a planned retreat from our coastlines is difficult enough. Getting it right is another story. New Jersey experimented with government buyouts of repeatedly flooded properties in the northeastern part of the state. But such programs only benefit homeowners and not renters. In places that are considered more expendable, we risk the permanent loss of culture.

As Sarah Watson, who works as a coastal adaptation specialist with the South Carolina Sea Grant, wrote on Twitter, coastal retreat usually works like this:

It comes after disaster, usually repeated, when people just can’t do it anymore and walk away. Y’all focus on buyouts, but those are the ones who win the lottery. This is everyone else. It’s about poverty, affordable housing, rural resources, community development, and all those other things that become gaping wounds when disasters occur. Those are the gaping wounds that become unstitchable [sic] as climate continues to change, unless we begin to also address them with far more resources and creativity than we do today.

There is a mismatch in what emergency management is doing this moment, before Florence – command and control, this week, next month, maybe next year – and climate adaptation. Right now these are separate planning processes politically, logistically, geographically. Few places integrate climate adaptation into hazard mitigation planning well. The safest swift water rescue is the one you never need to do, because the long-range planner made sure there wasn’t a subdivision there. And yet, it is not so simple as telling people to leave. This is not a North Carolina problem. It is not even just a U.S. problem. As sea level rises, this is a global problem.

Florence’s rains were so heavy in North Carolina that scientists would expect them to occur far less often than once in a thousand years. Neighboring South Carolina had its very own thousand-year rainstorm just three years ago. “Climate change is no longer a once-in-a-century problem,” meteorologist David Titley often says. “It’s now a once-in-a-mortgage problem.”

For most people, adapting to climate change isn’t the result of a long-term plan. It’s done in rush: a buzzing text message, an evacuation warning as the rain starts to fall, the National Guard humvee rolling up to your door, and the realization that you must leave home, if you can.